TSE 102: Why Selling Into LARGE Accounts Is Better Than Small Accounts | The Sales Evangelist! 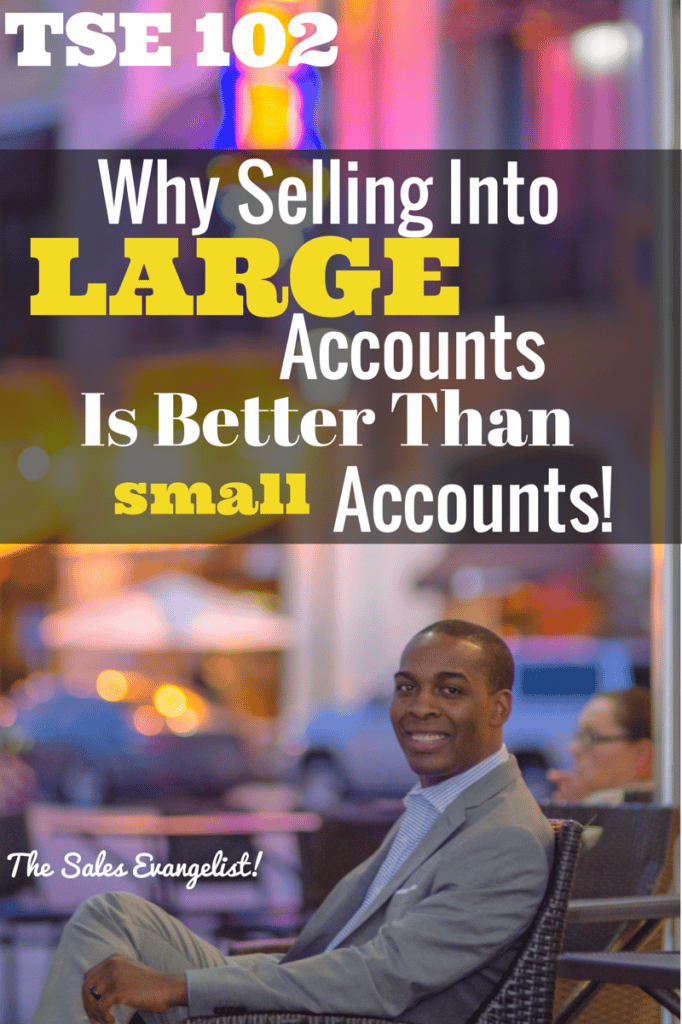 TSE 102: Why Selling Into LARGE Accounts Is Better Than Small Accounts. 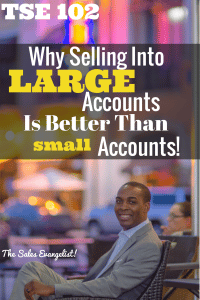 In this episode I share my personal thoughts on why I feel selling into LARGE accounts is better than smaller ones. I’ve had the privilege of working with both and the overwhelming conclusion came to me that large accounts were so much more worth it. Why? Because of the fact that large accounts and small accounts tend to take the same amount of time to close, large accounts tend to have a bigger budget, they also offer easier way to up sell and the commission far exceeds that of the smaller accounts.

But you are probably asking yourself, why are more people not taking advantage of large account selling? Well, the answer is simple. It’s because of the fear of failure or thinking it is harder to get into larger than the smaller accounts. Another reason that ties closely to fear, is not knowing how. But since I am the lab test, I have experiment with both and the results were astounding. Here are my thoughts why and how you need to get started on larger accounts.

1. Requires The Same Amount of Time

When I worked with large and small accounts, they took the same amount of time because I had to do the same work in both accounts. I had to identifying the challenges, meet with key decision makers, discuss budget, offer a demo, go through contract/negotiation and wait though the legal process (aka contract hell). When it was all said and done, both took about the same amount of time. I was so convinced that the smaller guys would take up less time to close and thus I could do more of those, but it was simply FALSE. Thinking they will close quicker than the big guys, is a deceptive concept that we tell ourselves as sellers.

Larger accounts also tend to have a more decent size budget than smaller accounts and thus pricing never becomes an obstacle, especially when you clearly identify a solid solution to a challenge they are facing. When working with small accounts, their budgets are tighter and thus they are more willing to live with pain than to fix it. Larger accounts will also offer you the ability to do more up selling as you properly manage the account during the sales cycle and post sale.

3. Better Commission for You

Since the large accounts have a significantly bigger budget, (in my case the deal was 6 times greater than the smaller account), the commission will be much more favorable with the larger accounts. Understanding that they will take the same amount of time to close and the same amount of work, why would you do anything else? It’s a no brainer decision.

But how do you get into these lager accounts? The same way you get into any ideal company (small or larger). Start off in one department and grow from there. For instant, can you assist the HR department in phase one of your deal and then work your way into other departments for phase two and three. This will allow you to learn the account, key individuals and understand processes and challenges facing their business. Your champion will then be a able to introduce you to decision makers in other departments and thus have a warm introduction instead of cold calling.

Take it from me, large accounts offer the best bang for the buck. However, as I discuss in the episode, if your business model has been successful working with small accounts, keep working your plan. If you are just scared of starting, stop it and start hunting bigger accounts.

I would like to hear your thoughts. What’s your experience working with larger v.s. small accounts? Feel free to weigh in on the conversation in our private Facebook Group, “The Sales Evangelizers”.