Joe Apfelbaum | TSE 1583: Breaking Into Large Accounts Without Wasting Your Whole Day on Your Feed

Donald Kelly | TSE 1582: 5 Underutilized LinkedIn Features That Can Give You More Leads This Week

View More
Donald Kelly | TSE 1582: 5 Underutilized LinkedIn Features That Can Give You More Leads This Week

Chris Shutts | TSE 1581: Why Your Sales Team’s Tech Tools Should Act as a GPS and Not a Map

View More
Chris Shutts | TSE 1581: Why Your Sales Team’s Tech Tools Should Act as a GPS and Not a Map 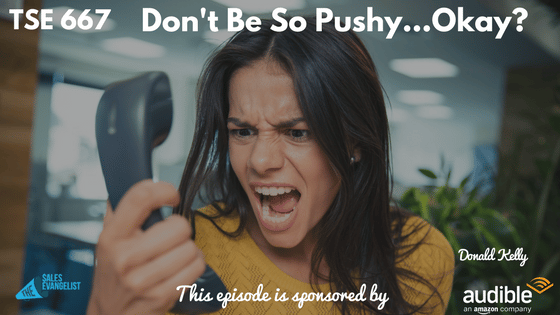 Ever heard of the term Cognitive Dissonance?

This is something I actually learned from Kurt Mortensen’s book, Maximum Influence, which I think is highly valuable and applicable to sales, specifically when we talk about asking for sales commitments. That’s why I’m sharing it with you.

What is Cognitive Dissonance?

This is a psychological discomfort that happens when somebody’s actions or decisions are not congruent with their values, belief, or past commitments.

People don’t like to be hypocrites. If they are, they figure out a way to justify it.

We use these justifications so they become congruent with our ideas.

And once they came out, the researcher called them out for not washing their hands. And they had multiple reasons and justifications as to why they didn’t.

This proves scientifically that we don’t like to be told. So we create that dissonance.

We make justifications because we don’t like to be incongruent with our beliefs.

This another study was done at the beach where researchers acted as thieves. But nobody got up and stopped the person from taking the towel and radio.

The researchers did the same experiment. They had a different person leave their towel and their radio. But before they left, they spoke to a couple people around them asking them to watch their stuff for them. So when the “thief” came to take the radio and towel, everyone stopped them.

So what happened in this situation?

When someone doesn’t have any connection to us as an individual, the likelihood of us caring for it wanes or doesn’t even exist. But when we make a commitment, verbal or written, our likelihood to fulfill that commitment increases significantly.

Do you practice the idea of cognitive dissonance?

Researchers asked graduate students to take part in a 7am-session on thinking process. The group was told the session began at 7am. Of all the students they told, only 25% agreed to participate in the group study.

In their second approach, they didn’t say anything about the time until the person had given consent first. They told the student what the study was about first and asked them if they were willing to participate. 56% of them said yes. They they were told about the time. And 95% of them showed up.

Get Your Foot in the Door

When you’re able to help someone make a small decision, the likelihood of them making a bigger decision increases because they’ve already set that motion.

They already gave you the YES!

Give them an easy way to justify it by giving them little commitments allowing them to make big decisions.