TSE 1254: How To Develop An Unstoppable Drive To Sales Success

TSE 1254: How To Develop An Unstoppable Drive To Sales Success 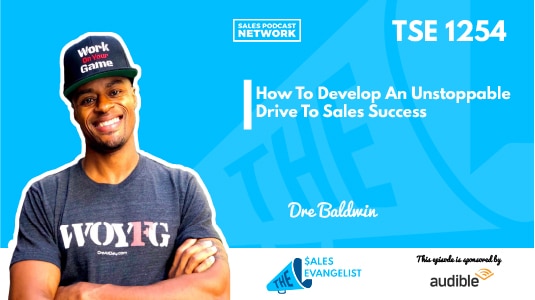 Dre Baldwin was a professional basketball player. He graduated from Penn State and played overseas for nine years across eight different countries. He is now an author and speaker. Dre creates programs for both athletes and non-athletes and does coaching and consulting, among his many jobs. He is also considered as an influencer with YouTube views of over 40 million.

The beginning of his basketball career

Dre started playing basketball at the later age of fourteen. With other players starting out much earlier, many were better than he was and had a greater skill set. With this in mind, he knew the only way for him to get better and earn their respect was to do more than everybody else was doing.

He practiced way before others were coming to the court. While people started playing when the sun went down, he started playing between 10 AM to 4 PM, when it was too hot for others to join him. He didn’t have a coach or a mentor so there was no one he could ask for help. He had to drive himself to improve.

Dre went on to college and tried out for the basketball team as a walk-on. Fortunately, he had improved enough to be recruited in his freshman year and by summer, he was invited to go to another Penn State branch that was an NCAA division three school.

Many success stories have rags to riches origin story but that wasn’t Dre’s case.  He grew up comfortably with both parents. When you’re comfortable, where does the drive come from that pushes you to do better?  For Dre, it was seeing the success of people who’d truly had rags to riches stories, like 50 Cent and Jay Z. Dre’s favorite entertainer is the rapper 50 Cent who was shot nine times and almost died. 50 Cent ended up making it big in the industry, working hard to get out of the ghetto and into a glamorous life. Jay Z came from the projects, didn’t know his father, was selling drugs on the streets and became wildly successful as a rapper.

These people grew up in some of the worse situations but they turned their lives around. You might ask yourself how you can have the same success story by finding ways to motivate yourself to do better.

Having the force within

Many people have to find the drive within themselves to strive for better. You have to force yourself to find inspiration and get motivated.

Dre works hard and keeps himself motivated to strive harder. He’s published books on self-discipline and he’s talked about it on podcasts and a variety of other platforms. Knowing that he’s created so much content himself, he realizes that information is available if you’re driven to apply it. How to move into success isn’t a secret.  Being successful is more about your willingness to show up and take action over and over again.

The lies keeping you from success

The most common lie that keeps people from realizing success is I can’t do this because ________ and they fill in the blank with all kinds of reasons. The other lie is I need more information. This is something that we hear a lot. More often than not, people already have the steps and the training but they’re just not sure if they’re doing it correctly. This is especially true if they are looking at other people who are doing it differently.

We need to understand that not everything works immediately. Starting the process doesn’t mean immediate success. In the same way that buying an SEO online course doesn’t mean that your website will rank number one within a week. You need to put in the work over and over again. Success is not a matter of what you’ve done or what you’re doing at the moment, it’s a matter of showing up and doing it repeatedly.

When you don’t see immediate success you don’t have to question all the information you’ve gathered and gone back to information-gathering mode. You must take action and not stop.

Dre’s basketball team in college got a new coach and he wanted new players. Dre was kept on the team initially but was eventually let go.  He didn’t play basketball in the last year and a half he went to school. When he got his degree, he went back home to Philadelphia and his parents asked him what he was doing next. He told them that he was going to play professional basketball. At this point, his parents hadn’t gotten to him play. He was 22 years old with a degree in business but he was choosing to play basketball. It made no sense.

When he graduated, Dre had no resume or experience  and that became his drive. He went to an exposure camp, where you bring your sports gear and play against other players. This is where you prove your worth in front of coaches, managers, agent scouts, power brokers in eSports, and other power players. Dre got a video from the camp and that became his golden ticket to professional basketball. He emailed every basketball agent he could find and he sent his video to those who replied to his initial message. Dre also uploaded the video on YouTube, beginning his YouTube career. He finally found an agent and this agent negotiated Dre’s first game in Lithuania.

Dre was doing social media before it boomed and became the business it is today. There were no ads on YouTube then and wasn’t yet a platform where you could monetize your content. Dre’s videos were mainly uploaded for safekeeping but people saw his videos and kept asking questions.

Dre realized that YouTube was an underutilized resource. He decided to bring his camera with him to the gym and started filming everything. He then uploaded these to YouTube thinking his videos may help other people improve their game. It wasn’t about the money, it was about helping others. Viewers responded to Dre because they could see his genuine desire to help and he was authentic. He didn’t pretend to be anyone else in front of the camera.  Dre was himself and his viewers kept coming back.

“How To Develop An Unstoppable Drive To Sales Success” episode resources

There are so many resources that sellers utilize. Social media is one of the most powerful ways you can increase brand awareness. Whatever competition you may face, the one competitive advantage that can never be duplicated is your individuality. When you talk authentically with other people, you’re not only sharing your products and services, you are also allowing them to see you as a person and with customers, that goes a long way.

We have a new semester beginning on February 14th and we would love to have you and your team join us. Follow this link to apply to the program.