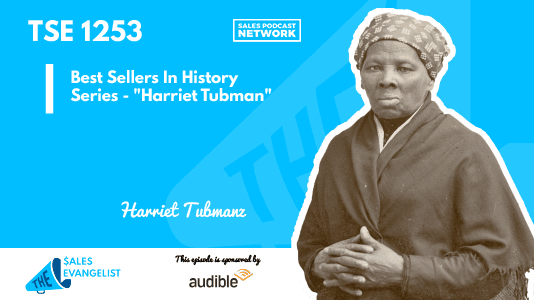 It’s another episode from the Best Sellers in History series. This month, we will be focusing on African American individuals who have been very persuasive. One such individual was Harriet Tubman, also known as the Black Moses. Harriet was born as a slave but managed to escape and rescue more than 300 slaves. In this episode, we’ll focus on why Harriet was so successful in convincing people to leave the life of slavery, even if getting caught meant death.

Harriet Tubman was born as Emerita Ross in March 1822. The exact date was never known because a slave’s birth date wasn’t recorded. Slaves were considered property and weren’t valued as individuals. She was born in Dorchester County, Maryland and growing up, she was beaten and whipped by her masters.  There was one incident Harriet endured when a slave owner threw a heavy metal object at another slave and hit Harriet instead. This injury caused a scar she would wear for the rest of her life and she suffered hypersomnia as a result.

Harriet had a Methodist upbringing and was deeply religious. That faith helped carry her through the worst times of her life. Harriet escaped to Philadelphia in 1894 and immediately returned to Maryland to rescue her family. She brought slaves out of Maryland, one group at a time, into a life of freedom in Philadelphia. This is how she got the nickname “Moses” from the other slaves.  They saw her as bringing people out of slavery and leading them to the promised land. She was a modern-day Moses who used the Underground Railroad to save hundreds of people.

Drive to help others

When the Fugitive Act was passed in 1850, Harriet could no longer bring escaped slaves to the northern states. This didn’t deter her, however. Instead, she went further north and brought them all the way to Canada. There, she helped them settle as free people and they were able to experience building their own lives.

During the Civil War, she became an armed scout and spy. She was actually the first woman to lead an armed expedition in the war. Included in her tasks was to raid a Combahee ferry which liberated over 700 slaves. After the war, she retired to her home in Auburn, New York and cared for her aging parents.

Even after her impressive feats during the Civil War, she kept fighting for rights and this time, it was in women’s suffrage. She was an impeccable icon for courage and freedom. When Harriet Tubman made a decision she stuck to her guns.

Harriet Tubman’s persuasiveness made an impact on history. It was the following five traits that made Harriet Tubman a force to be reckoned with.

Like all the other individuals talked about in this series, Harriet Tubman had a vision. Regardless of what your role is in the sales industry, you need a vision of what you want your life to look like. This vision is the hope that pushes you when things get hard.

Harriet didn’t always have a vision for a better life. She was just trying to survive from one day to the next and hold onto hope.  Her religious upbringing helped to keep her hope alive. Jesus Christ and God gave them hope that they’d eventually be saved and delivered from slavery, in this life or beyond

To fortify one another, the slaves would meet in secret and sing songs to signal one another about where the meeting would be held. At these meetings, they started to discuss other slaves who had runaways to the North and were living a free life.  They began to hear about the underground railroad.

The catalyst of Harriet’s change of vision

Harriet only knew the life of a slave, not a life of freedom. She didn’t grow up thinking she could own anything or make choices for her own life. Hearing the stories about freed slaves inspired Harriet and it awakened a vision. At the time, Harriet was married to a free man and when their slave master died, her family had the option of running away or getting sold to another master. With the vision of freedom firmly planted in her mind, Harriet talked to her husband about running away. He opposed the idea and even threatened to tell someone about Harriet wanting to run.

Like many people, her husband feared change. Even though he was free, he didn’t feel free. He still had the mindset of a slave.

As a salesperson, you need to protect your mind and only surround yourself with people who are there to elevate your vision. Harriet could have stayed and shut her vision down, but instead, she moved toward people who elevated and encouraged her. She listened to the people who told her stories about freedom in the North.

Even when her husband opposed her idea and others told her it was dangerous, she still went. Salespeople need to be the mastermind of their thoughts and actions. Make sure that you have a vision, regardless of what your vision may be. It just has to be something you want to reach for and accomplish. Don’t sign up for easy. Sign up for what you want to accomplish in this life. Create a vision, surround yourself with people who can elevate you, and seek help from people who will take action.Whether that is to create your own organization, build your business, or increase your sales, just keep going.

Harriet Tubman had a cause. She wanted to do something and make an impact.

She reasoned that she had the right to liberty or death and if she couldn’t have one, she would have the other. With liberty being her driving force, she put a plan together and ran with her brothers. On the first day, they got scared and went back, leaving Harriet alone. She pressed forward and made it to the North where she claimed her freedom. Her vision helped push her forward.

The same can be true for sales reps. You need to have a vision that will push you forward. This vision will help you overcome the challenges you may face. It’s just reality that deals fall apart but get to a new day where you could close a new deal. Always make sure your why is bigger than the circumstances.

Harriet Tubman was able to be persistent because of her bravery. She didn’t let her fear get in the way of her freedom. Her husband threatened to tell on her, and her life was at risk. She was left on her own the first time she ran; however, all those things didn’t matter because she had a strong purpose and an even stronger belief. She believed that God would empower her when she got into trouble. Her purpose made her powerful.

As a B2B sales rep, you need to be brave. You have to be willing to do things that are scary, including talking to “whales” in your industry. Speaking with executives from a large organization takes more than just confidence, it takes bravery. While it won’t always turn into an opportunity, it is a practice in overcoming fear.

Escaping slavery wasn’t easy. The Underground Railroad wasn’t an actual railroad. It was running, walking, traveling through the night, and battling the elements. They were exposed to potential attacks from animals and they were being chased by people who wanted to kill them. It was a dangerous trip but Harriet did it 19 times and rescued over 300 people. In all those trips, she never lost an individual. She put herself in danger to help other people so they taste freedom as well.

B2B sales reps need a burning desire to care and help others. This doesn’t mean you have to go back to being a pushy salesperson. Instead, be the sales rep who sees things from the buyers’ perspective. Put the interests of your clients above your own.

Stephen Covey’s says to seek first to understand and then be understood. Put yourself in the buyer’s shoes.  Dig deeper, discover, and understand your client before you present your solutions. Closing the deal can’t be your only priority. Just as important is how the client can benefit from what you have to offer.

Have a strong passion

Harriet kept going back and forth, rescuing people. She had a strong passion for helping people.  She was willing to do whatever it took to save people from slavery.

Salespeople need to have the same mindset and have the willingness to go above and beyond if they want to be successful in what they do. You may have to do things outside the norm and make sacrifices.

Harriet Tubman was also creative. She utilized a variety of disguises every time she made a trip, even dressing as a man when needed. She thought outside the box.

In sales, creativity will set you apart from your competition.

Harriet Tubman had a vision, she had a why and bravery, she was selfless, she was passionate and she was super creative. #HarrietTubman

Harriet Tubman was a great seller because these traits made her a force to be reckoned with.

We have a new semester beginning on February 14th and we would love to have you and your team join us. Follow this link to apply to the program.