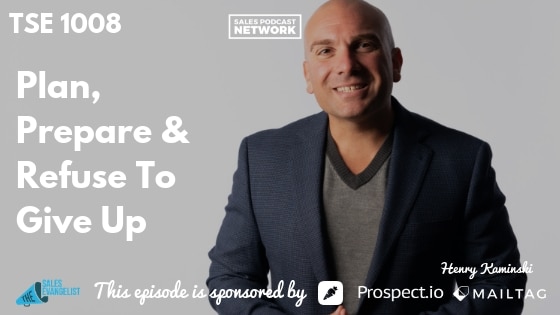 Today we’re talking about how to Plan, Prepare and Refuse to Give Up with podcast host, branding expert, and author Henry Kaminski, Jr.

Henry started twelve years ago as a freelance graphic designer, eventually growing his business into a mature, boutique brand development agency.  His average client is typically worth $50-100K over a calendar year.

But Henry remembers not so long ago when he was working for Fiverr. As sales reps, we know how it feels to want to get to the top as quickly as possible. We think it will be easy but then it is not long before we hit the hiccups.

Henry says it all comes down to preparation. He credits himself with once being the worst salesman on the planet.

These days, Henry follows a very specific, tried and true script that he practices on a weekly basis. He does not deviate from that script and, as such, he is closing more and more sales.

People perceive our value based on the questions we ask so planning ahead of time what to say is key. As Henry says “asking stupid questions only gets you stupid answers.” You will be perceived as an amateur.

As a brand strategist and brand developer, Henry wants to position his clients to become subject matter experts.  He wants people to be on the edge of their seats whenever one of his clients is speaking. It is all about positioning and that comes with preparation.

Do your research on your client. Know as much about them as possible before you make the call. #ResearchYourProspects

This is a lesson Henry learned the hard way.

You have to know the answers to the questions but you will want to challenge the person that you are speaking to. There is no value in telling the client what they already know.

Let your client know that you may ask them some tough questions – questions they maybe haven’t about thought before. Be sure they understand that your intent is not to pry but to get to the root of the issues in order to be the most helpful.

Henry became intentional with his desire to start his own business after Hurricane Sandy blew through New Jersey and wiped out two of his biggest clients. Henry tried to continue living the lifestyle to which he had become accustomed but with a revenue loss of a quarter of a million dollars, it just wasn’t possible.

At the same time, Fiverr entered the design world and disrupted the entire industry. Henry couldn’t beat them so he joined them. But it wasn’t a sustainable position.

He remembers a $120 paycheck for over 90 hours of work and he remembers earning $5 for six hours of revisions on a business card.

And he remembers telling his wife that they needed to make a change.

She got out the laptop and said, “Let’s get to work.”

Henry started working with a mentor, Russell Brunson. He couldn’t afford to pay for the coaching program but he couldn’t afford not to, either. So he maxed out his credit card and got on the phone with Russell.

At the end of the one-hour call, they were both crying hysterically as Henry was hired on the spot to help with Russell’s first book launch.

That gave Henry the confidence boost he needed. It was the biggest sale he ever made and it led to another job with Russell a few months later.

More importantly, Henry received the most important tidbit of insight from Russell. Despite all his fancy websites and great designs, Henry himself was nowhere to be found on any of it.

His big personality was hiding behind the logo.

That has all changed now and Henry doesn’t regret it for a minute. He has found his lane. Content creation and working one-on-one with the clients is where he wants to stay.

As a podcast host, myself, I can relate. People came to my webpage and listened to my podcast, but if they wanted to see me, they couldn’t. It was all stock photographs. I had to put myself out there. I had to make myself available for my audience.

We shouldn’t diminish ourselves. We need to put ourselves first and refuse to give up. I used to be intimidated and afraid that maybe I didn’t look good on camera or that seeing my brand was better than seeing the real me.

Rather, your personal brand is just an offset of your business. If you are shy and timid, it will show in your messaging. Don’t be afraid of yourself.

Even the bigger brands, according to Henry, are coming out of their shells. The only difference between you and everybody else is you! You have to invest in your personal brand. It’s critical.

Refuse to give up

Henry credits his unwillingness to give up to his parents who tried for 16 years to become pregnant with Henry. His Mom would call him her ‘miracle baby.’ Henry believes that hearing that story while growing up – that his parents refused to give up for over 16 years – is what fuels his drive now.

There are so many times when we try something once or twice and quit when it doesn’t go our way. His parent relentlessly pursued their goal for 16 years.

If you are feeling uncertain or hesitant when looking forward because of past difficulties, Henry recommends you remember that it is all a numbers game. He once went three months without one single sale. He kept looking back and beating himself up over what he might have done differently.

His mentor reminded him that a rearview window is smaller than a windshield for a reason – because you are not going that way.

Any setback is temporary. It’s like a storm passing through town. It might be a struggle but it will pass.

Have confidence in your preparations and see them through.

“Plan, Prepare and Refuse to Give Up” episode resources

Henry is very active on Instagram and can be found at thebranddr and on his website Unique Designz.

Grab a copy of his book Refuse to Give Up and connect with him at Brand Doctor’s podcast.

You’ll receive real-time alerts anyone opens an email or clicks a link. 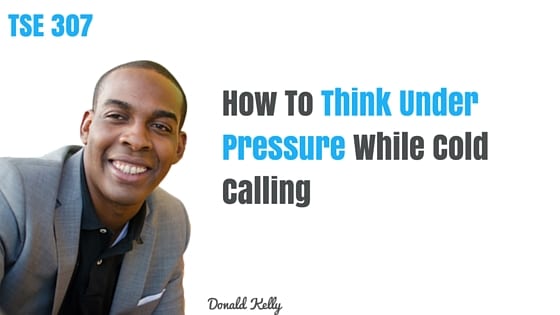 TSE 307: How To Think Under Pressure While Cold Calling

Today, we basically talk about how you can think on your feet when you’re cold calling. Or should you actually be doing that at all? Okay, so I’ve done this thing with Toastmasters called Table Topics, which is an impromptu 2-3 minute speech where you get to speak about a particular topic.

And here are some things I’ve learned which you can apply when cold calling:

Preparation is critical. You may not know what you’re going to speak about but you’ve got to have some vignettes in your head that you’re able to mold according to different things based on stories from your childhood, school, work experiences, podcast, family life, etc. As soon as you hear a topic, pick one of them out and then start going from there.

“Cold calling? No more winging it!”

Use various means to generate new business. Tap into different avenues when getting new prospects – social selling, referrals, etc. With cold calling, do some elements of it but try to gain information through social media or build a quick connection with them on social media so it makes cold calling a little bit warm somehow. Do a quick connection or share something about yourself to build their interest.

Stories can help you make your prospects relate with your product or service on a deeper level. Understand that there are things specific to that situation that most clients are going to have, be it the price, safety/security, technology, or competition. Either way, always prepare before getting into a call. Write down 5 things that prospects typically bring up in the very first meeting so you can come prepared.

You won’t have an exact script but somehow you will have a better context of how the conversation is going to be like.