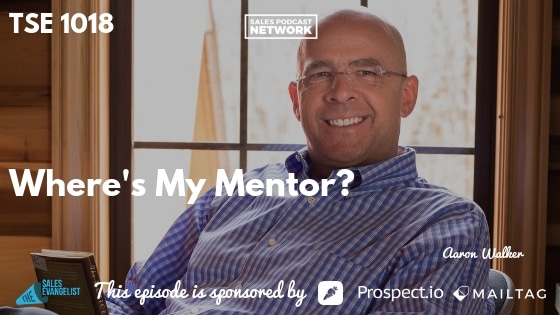 Many of us in sales have jumped into companies without a training process or guidance; we find ourselves winging it and wondering, “Where’s my mentor?”

Aaron Walker started in the business when he was 18 years old. At the age of 27, he sold to a Fortune 500 company and retired.

Eighteen months later, his wife told him he was becoming fat and lazy; so he went back to work, purchased the company he first started and grew it four times in 10 years.

It was all fun until the unimaginable happened in August 2001.

Aaron accidentally killed a pedestrian with his car. It changed his life.

He sold the business and spent the next five years learning how to deal with the tragedy.

In the process, he realized that his financial success lacked significance. He didn’t want his legacy to be “‘enough money to retire at the age of 27.” Nobody cares.

He wanted to make a change. He decided to spend his life encouraging and edifying others.

Aaron changed the way he did business. He started looking outward more than inward and he gathered mentors to help him.

His life began to take a very different path.

With the help of several mentors he has worked with for more than two decades in a Mastermind group, Aaron launched his own coaching company, View From the Top.

He now leads 14 mastermind groups in eight different countries to help people live a life of success and significance.

Isolation is the enemy to excellence

Aaron defines a mentor as somebody who will walk alongside you for an extended period of time, as opposed to a coach who helps you get through a certain point in life.

Aaron has been with some of the same mentors for more than 40 years. They help him realize where he needs to go in life.

For sales, in particular, mentors are crucial. Aaron believes that it is very difficult to grow and expand alone because we each have only one filter – one life experience that guides how we view things.

The value of mentors

Other people see us differently than we see ourselves. As such, mentors can help realize your superpowers. They also help you understand your weaknesses and to see your blind spots.

Having a mentor to point out what we would otherwise miss ourselves can be the very thing that puts us over the top.

We have many obstacles and upper limit challenges that we need to push through. Trusted and unbiased advisors can point us in the right direction.

Aaron recalls a guy in one of his mastermind groups that was putting together a course that was, in reality, absolutely terrible. Everything about it was terrible, but the group helped him tweak it and shape it into something amazing.

It’s the same way in our lives. Aaron admits he lacks tact but never realized that many people viewed him as arrogant and condescending until his wife pointed it out to him. It was one of his blind spots.

We need people around us who can help us out.

We all know the overly confident, borderline cocky salespeople. Getting them to accept advice, to realize their blind spots and to be humble is tricky. Confidence is needed in sales but people don’t buy arrogance and cockiness. There has to be a measure of humility. A mentor can help you get there.

Surround yourselves in business, in marriage, in every area of your life with mentors that you trust to help you get where you want to go.

Look for someone who has nothing to lose, or gain, by talking to you. Family members are often biased in that regard because they want you to have what you want to have.

You want someone who will give it to you straight.

They can take your great idea, look at it, and point out the things about it that you might not have thought of.  When you work with the same people over months or years, a pattern develops and they see it.

Aaron has worked with the same counselor for decades. They talk when things are going well and when they aren’t. Over that amount of time, the counselor realized that Aaron did something completely radical about once every 36 months. This type of behavior classifies Aaron as a ‘creator developer’, rather than a ‘maintainer manager.’

A creator developer is someone who gets bored easily and who doesn’t like everything to be the same all the time. It explains why Aaron has had 12 businesses. He likes to develop and create.

Because Aaron had a mentor who was able to point it out, Aaron can now plan accordingly.

The ebbs and the flows

Many young people don’t have mentors while many people with experience to share aren’t necessarily interested in reaching out. Aaron is hoping to connect the two.

Mentors have changed Aaron’s life in many ways. He remembers many ebbs and flows throughout his life. One dark time several years ago was particularly difficult. Aaron relied heavily upon his mastermind group at the time and met with them every week. He just could not get motivated but the group was there to listen.

It went on for months.

Then, one Saturday, Aaron got a call from one of the guys in the group. It was alarming at first because the group never spoke on the weekends but Aaron knew by the tone of his voice that it was good news.

“I know you’ve been in a dark spot for a long time and I’ve been praying for you … but you are wearing the hell out of everybody in the group. You just keep on and on every week. Take the chains off from around your neck and move on,” he said.

And then he hung up. Aaron was so mad at the audacity of the call.

But then he started thinking.

Realizing that his friend loved him enough to tell him the truth was the change he needed to get over it and to move forward.

A casual friendship does not give that kind of hard truth.

You can not live the adventure you were meant to live alone. #FindYourPeople

Put down the facade and be vulnerable. That is where true strength starts. Surround yourself with people who know your good, your bad, and your ugly but who still care about you.

It is the solid foundation that will allow you to become all you were created to be.

You can reach out to Aaron via his website, Viewfromthetop.com. His mastermind group, Iron Sharpens Iron (ISI), meets on a regular basis via video conference all over the world. Check it out!

Mailtag.io will give you half-off your subscription for life when you use the Promo Code: Donald at check out. 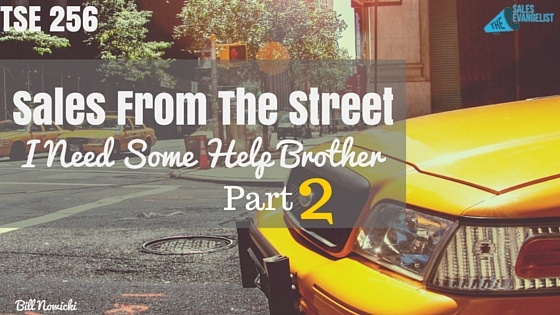 Bill and I talked back in Episode 227 where I did a coaching session with him. We basically talked about the business that he’s starting with video production to help organizations better articulate their value through the power of video.

Today’s episode is somewhat a follow up on the strategies that he has implemented and seen since the last time we talked.

A brief background about Bill…

Bill Nowicki is a nuclear engineer and host of the podcast Submarine Sea Stories where he gets to chat with old buddies in the navy. Through his company Nowicki Media, Bill pivoted into video creation which is the one thing he’s really, really passionate about.

In our previous session, Bill had set some goals of getting a paid customer by the end of 2015, putting together an avatar, and being able to start putting himself out there. As of recording this audio, Bill had two weeks left before the end of the year. Let’s find out if Bill was able to achieve his goals. So, let’s dig right into it…

Bill’s friend runs a restaurant and he used to be Frank Sinatra’s driver back in the 70’s. He had wanted Bill to put together a video for him for his restaurant since Frank’s 100th birthday was coming up.

Result: Bill put a video together in 3 hours with some cuts of Frank Sinatra and a bunch of pictures and birthday parties he was at with Frank. The result was a 14-minute video. In the end, Bill’s friend offered to pay him $200.

Has Bill found his niche market?

Bill’s neighbor is in the board of directors of an old historic house in Marietta, Georgia and wanted Bill to create a video for them. So he met with her and another lady named, Anna Brumby, the CEO of Brumby Chair Company, a local manufacturing company in Marietta. She was looking into creating how-to videos and was asking Bill if he could do it. Currently, Bill has sent out his proposals and they have been exchanging comments and reviews.

Presently, Bill is focusing on small businesses and what he loves about it is that “you get to have that connection with the people running it.”

Bill’s next steps in his process:

Bill sees video as a part of a whole strategy so he reached out to their church’s daycare preschool and made a video about their 5K race. Then he will be taking this video and start doing Facebook ads for them to test the waters, so to speak. Watch the video on his website. http://www.nowickimedia.com/portfolio/

Here are some other nuggets of wisdom gleaned from this conversation:

We’re following up with Bill in a couple of months but so far he’s definitely on the right track.

I’m checking up on what you’ve done so far too. Have you clearly identified your avatar and understood their pain points? What steps have you taken lately?