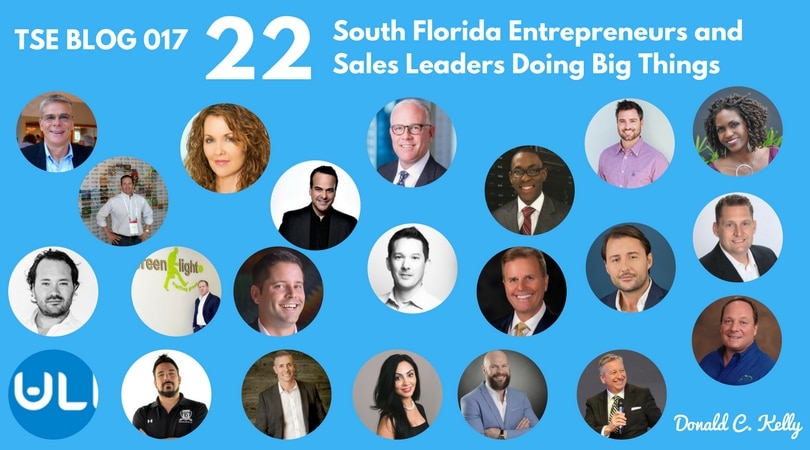 The key to success is proximity.

According to Tony Robbins, you’re far more likely to be successful if you surround yourself with people who are playing the game at a higher level than you are.

It allows you to model already-proven strategies, shaving valuable time off your timeline.

So why not start close to home?

The following 22 people are entrepreneurs who live in our midst. They call South Florida home, and they have demonstrated success in their respective fields. Learning their stories and studying their techniques could translate to career and personal success.

Many of the companies represented below landed on Inc.’s list of the 5000 fastest growing companies, and some of them have been there for years.

Jorge Plasencia Co-Founder, Chairman & CEO of Republica, one of America’s leading and fastest-growing independent marketing and communications agencies. República is an international agency creating relevant, enduring connections between brands and people across culture, language, and technology. The Miami based company generates north of $15 million in revenue.

Brett Forman is the founder and CEO of Forman Capital, a real estate lender for bridge and commercial real estate loans. The Boynton Beach company generated $7.9 million in revenue in 2016, landing it at #4252 on the Inc. 5000 list.

Suzan McDowell is the president & CEO of Circle of One Marketing, a full-service marketing and advertising agency with a tilt towards the African American and Caribbean markets. Circle of One has developed successful multicultural campaigns for a wide range of clients, across all types of media. The company generates about $2 million in annual revenue.

Maria Salazar is the Director of Sales at Azulle, #249 on this year’s list. Azulle, based out of North Miami Beach, boasts a line of mini PC’s, tablets, and the Quantum Access computer. The company seeks to bring affordable and innovative technology to businesses and families, generating $6.3 million in revenue.

Adam Mopsick is the CEO of Amicon Management in Miami. The real estate and construction company generated $2 million in revenue last year, earning it the #1232 on the Inc. 5000 list.

Niles Tagliamonte is the Vice President of Sales for Endosystems, based out of Fort Lauderdale. The B2B company distributes equipment and devices related to the aesthetic and wellness industry. Endosystems is #1412 on Inc.’s list, with a revenue value of $3.2 million.

Brian Scheel serves as the Vice President of Sales for Arrow Consulting & Design, a software development firm headquartered in West Palm Beach. With revenue of $10.3 million, Arrow has twice been named to the Inc. 5,000 — in 2015 and again in 2016.

Robin Tidrick of PaperStreet Web Design is Sales Director at the Fort Lauderdale-based company. With a 2016 revenue of $3.4 million, PaperStreet offers website design, internet marketing, SEO and content services. Founded in 2001, the company has served more than 1,300 firms since its inception.

Alexander Nygart and Gary Garth co-founded White Shark Media, a digital marketing company that tailors online marketing solutions for small and medium-sized businesses. Ranked #786 on the Inc. 5000, the Miami-based agency had a 2016 revenue of $10 million and was included on the previous two years’ lists as well. White Shark Media was also ranked #18 on Inc.’s list of Top Miami companies.

Kevin V. Michael is the co-founder and managing partner of Invizio, LLC, a South Florida IT services and consulting firm dedicated to helping businesses maximize their use of technology. He oversees business development, strategic relationship development and client relations for the company. The company generates about $6.2 million in annual revenue.

Ron Green is the President and CEO of Greenlight Staffing Group, an IT staffing firm in Hollywood, Fl., that offers temporary, contract and permanent staffing to various industries. Greenlight has made the Inc. 5000 list for the past two years and generated $3.1 million in revenue in 2016.

Jessica Massad is the founder and CEO of Collateral Management, a network of appraisers that provides valuation services for both commercial and residential properties. This year’s #1589 ranking marks the third time the Fort Lauderdale-based company has made the 5000 list, and the company generated $10.8 million in revenue last year.

Eric Rhoads is the founder and CEO of Streamline Publishing in Boca Raton. In its 20th year, the company generated $5.6 million in 2016 and made the Inc. 5000 list for the third consecutive year. Streamline is anchored in the traditional printing of consumer and trade magazines and is also well-versed in digital radio and video products.

Richard Ticktin is the CEO of Synergy Labs, the manufacturer of dog and cat hard-goods in Fort Lauderdale. Synergy Labs earned the #1469 spot on the Inc. 5000 list with $8.7 million in revenue and 276% growth. Synergy boasts its own R&D laboratory and its own chemists, and it supplies more than 40 countries.

Henry Woodman is the President of ICE Portal in Hollywood, FL. ICE Portal is a technology company that helps hotels produce and distribute visual content to clients, generating $2.3 million in revenue in 2016.

Paul Rubenstein is the managing partner of Convert IT Marketing in Fort Lauderdale, an advertising, and marketing firm that specializes in internet marketing for law firms. The company earned the #1676 spot on Inc.’s list and generated $6.2 million in revenue last year.

Christine Phipps is the president of Phipps Reporting — a company that provides transcription, deposition and litigation services to the legal industry. The West Palm Beach company generated $8.6 million in 2016 and earned the #1915 ranking on the Inc. 5000 list. This year was the company’s fourth consecutive appearance on the list.

Sylvain Faber founded Eyevertising in 2010. The promotional product supplier, based out of Miami, generated a reported $2.4 million in 2016, and it holds six U.S. patents for its custom pinhole sunglasses.

Patrick Barnhill is the founder and president of Specialist ID, a distributor of photo identification badges and accessories in Miami. The company generated $3.7 million in 2016 and earned a spot on the Inc. 5000 list for the third consecutive year.

Gary Vermaas is the CEO of Base4, a management company that assembles teams of architects and engineers to design resorts, theme parks, hotels, and hospitals as well as retail, commercial and institutional buildings. The company generated $5.7 million in 2016, earning it the #1607 on the Inc. 5000 list. Base4 also earned a spot on the list in 2016.

Nicholas Santillo is the president and co-founder of Fractl, a Delray Beach advertising and marketing firm that gets attention for clients through viral content and media mentions. Fractl generated $5.1 million in revenue in 2016, and it landed at #1053 on the Inc. 5000 list.

Increase Your Odds of Success

Be deliberate with your time. Invest your time in things that have an impact. Maximize your time by learning important lessons from the people who have already learned them.

Start with the people in your neck of the woods. Start with successful entrepreneurs on LinkedIn.

Use proximity to your advantage.[/vc_column_text][/vc_column][/vc_row]