6 Sales and Entrepreneur Lessons I Learn From The Greatest Showman 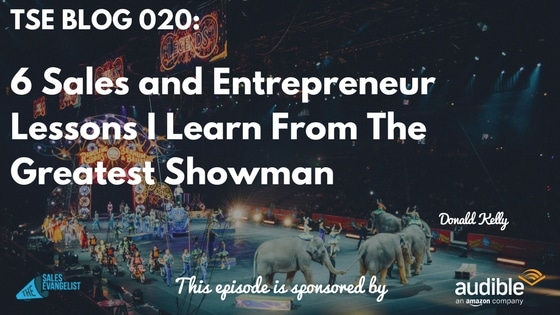 TSE BLOG 020: 6 Sales and Entrepreneur Lessons I Learn From The Greatest Showman

If you haven’t seen “The Greatest Showman,” consider this: it’s much more than a movie or musical. As an entrepreneur and a seller, I took away many great principles.

The movie has many more lessons in entrepreneurship; a how-to guide for those looking to grow their careers; a study in sales, and the things that will help us succeed.

Watch for these 6 lessons when you see the movie:

P.T. Barnum came from nothing. His wife hailed from a wealthy family, and Barnum wanted to provide the kind of life she had always known. He also wanted to prove himself to her father, who doubted his abilities. Proving himself became his “why.”

My own family was without a home for a period when I was in high school, so we stayed with friends and family. I watched my mom scrape money together to buy the things we needed, and that experience created in me a drive to succeed. I’m no millionaire, but the desire to provide for my family pushes me to work hard every day.

What gets you out of bed every morning? Knowing your “why” will help you persevere when challenges arise. As an entrepreneur this is critical.

Barnum was repeatedly rejected but he found creative ways to work around it. When he was fired from his job because his company’s fleet of ships sank into the sea, he took the deed from one of those sunken ships and used it as collateral to secure a business loan.

Be ethical, but be creative. When one opportunity dies, work to find another option.

As an entrepreneur, do you allow rejection to derail your plans or do you find creative ways to work around it?

3. Determine how much is enough.

Barnum was obsessed with the idea of being the best in the world. He allowed it to consume his life to the exclusion of everything else.

The drive to improve is a good thing, but you must maintain your priorities. Don’t allow your drive for success, sabotage your relationships.

Have a number in your mind that represents “enough” and be willing to stop striving when you reach it. If you believe there will never be enough, ensure that your drive to achieve doesn’t cost you your family.

How much is enough for you?

P.T. Barnum encountered a young man who was dwarf and asked him to join the emerging circus. The young man refused because he didn’t want to be laughed at. Barnum pointed out that people were already laughing at him; at least this way he would be earning money.

Barnum was so focused on his own agenda that he failed to see what the young man wanted. No one wants to be ridiculed no matter how much money he or she will get.

Sales professionals make this mistake all the time. We sell customers what we want them to have instead of creating value for them.

Suddenly, the young man was engaged because Barnum offered something he wanted.

What matters most to your customers? How can you add value to them?

Distractions surround us. Anything that doesn’t move us toward our goals can be considered a distraction.

At one point, Barnum became so focused on gaining acceptance from the aristocrats that he neglected his family.

It happens to all of us, but when we recognize it, we can move back on track.

What distractions are interfering with your goals? As a seller or entrepreneur, how are you handling the shiny object syndrome?

6. Lead more often than you sell.

Barnum recruited people that society rejected; people whose differences made them “freaks.”

Barnum initially failed to realize that he had created a family for them. They were finally accepted by people because of their entertainment value. He made them part of something bigger than themselves. He inspired them.

If you find yourself focusing on numbers, look at the people around you. Find out what they need or want most. Share your vision. Develop followers.

Are you inspiring people to take action and become part of a cause bigger than themselves?

Barnum’s lessons are timeless, and they apply to all industries and experience levels. He chased his dream and learned from his mistakes.

Set goals and do everything in your power to achieve them. Refuse to be diverted from your path and inspire others along the way.

As an entrepreneur or seller, strive to be better every day and be intentional about the things you do.

Above all, do big things.

PS, check out my podcast on the topic as well.