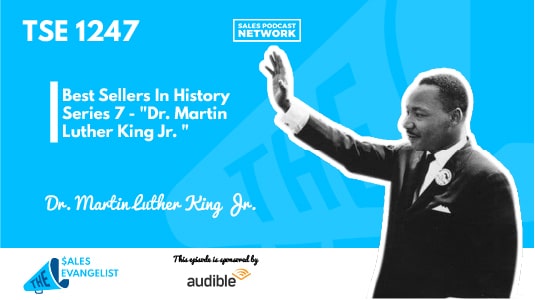 This is the seventh episode in the Best Sellers in History series. We celebrated Martin Luther King Jr. day on January 20, a legendary man who was the face and voice behind the civil rights movement. We have freedom today and now have opportunities that weren’t available for many people before him. Martin Luther King Jr. fought a tough battle but he never gave up and his efforts paid off. Through his actions and his character, he was able to move people closer to justice and freedom.

Today’s episode is about Martin Luther King Jr., one of the best sellers in history. We’re going to focus on the characteristics that made him so persuasive and how he was able to inspire a nation to change its ways.

Dr. Martin Luther King Jr. was originally named Michael King Jr. He was born on January 15, 1929, in Atlanta, Georgia. He passed away on April 4, 1968, in Memphis, Tennessee. Martin was a Baptist minister and a social activist who led the civil rights movement in the United States from the mid-fifties until he was killed in the sixties. Dr. King’s leadership was fundamental to the success of the civil rights movement. His involvement helped to end segregation in the South and in other parts of the country as well. He rose to prominence as head of the Southern Christian Leadership Conference in 1964 and was awarded the Nobel Peace Prize for his continued effort to realize equality among his fellow Americans. King was among the youngest individuals to receive this award.

Dr. Martin Luther King Jr. was 15 when he entered Morehouse College in Atlanta under the special wartime program. It was created to help boost enrollment by admitting promising high school students like King. Before he officially began his college education, he spent his summer on a tobacco farm in Connecticut. It was his first time to be far from home and what he experienced there opened his mind. He saw how people with different races interacted with each other, he saw what life was like without segregation. He was shocked and he wrote about it to his family back home. He wrote about how negroes and the whites went to church together. He never thought people of the same color could share a meal together. That summer deepened his hatred towards racial segregation.

His oratorical skills came from his father and the time he spent going to church. It was further honed when he went to Morehouse College, especially when he met the school president, Benjamin Mays, who was also committed to fighting the battle against inequality and racial injustice. Benjamin accused the African-American community of being complacent in the face of oppression. King saw how strong-willed Benjamin was and this was not lost on the mind of a young Martin Luther King Jr.

Becoming the face of the movement

King furthered his education by going to a Theological Seminary in Chester, Pennsylvania and proceeded to Boston University where he got his degree and married his wife Coretta Scott. They got married in 1953 and had four children. King became a pastor at the Dexter Avenue Baptist Church in Montgomery, Alabama. A year before, the civil rights movement had already begun when everyone started talking about Rosa Parks. She had refused to give up her seat on the bus to a white female. This small group of social activists approached Martin Luther King Jr. because he was admired in his community, he was charismatic, and he was outgoing. Martin Luther King Jr. had ties in the ministry community so he was thought to be the perfect individual to be the voice for the civil rights movement. This launched his campaign to promote freedom and justice for all people.

Martin Luther King Jr. was a great salesperson for 5 reasons:

Building rapport and connecting with individuals

Dr. King was new to Montgomery, Alabama. He didn’t know many people but they knew about him. They knew of his stellar reputation and they saw something in him. The small group of activists who approached him was already doing taking action but they knew they needed Dr. King to help. They needed him because of his ability to connect and build rapport. It was a risk that Dr. King was willing to take.

Build rapport as a salesperson

As a sales representative, people will do business with you only if they trust and like you. The community rallied behind Dr. King because they trusted him. As a salesperson it’s important to build trust with your clients as they get to know you. Show them you’re trustworthy, understand them and you empathize with their problems. Reflect similar behavior and language. They need to see that you are in the same tribe.

Start with your LinkedIn profile. Check out your social circle and try to connect to one person a day. Send them a note of positivity. Practice this every day until deeper connections are made.

In Martin Luther King Jr.’s famous speech, I Have a Dream, he painted a picture of hope for people who otherwise may have felt there was no hope for their race.. He encouraged them to take action and challenge the status quo.

All of the great people we’ve had in this series all had a vision and they helped other people to recognize that vision too.

Create a vision as a salesperson

A salesperson’s job is to show your clients a better tomorrow, especially those who are stuck in the status quo. Help them realize that there is a solution to their problem even if they see them as insurmountable, and they need to do something about it. Show them how much better their lives could be if they implemented the solutions you provide. Paint a vision for them, even as simple as getting home to the kids early, being able to spend more time for the family, etc.

Dr. King came from a family of ministers so he’d been in church all his life. As he observed people at the pulpit and learned from his mentors, it became natural for him to speak in public. These experiences helped him hone his skills. His words were profound and conveyed messages of great importance. No one can listen to his I have a Dream speech without feeling something, regardless of what side you are on. In the final speech before he died, he said,

“We’ve got some difficult days ahead, but it really doesn’t matter with me now because I’ve been to the mountaintop… like anybody, I would like to live a love life, longevity has its place. But I’m not concerned about that now. I just want to do God’s will and he’s allowed me to go up to the mountain. I’ve looked over and I’ve seen the promised land. I may not get there with you, but I want you to know the night. And we as a people will get to the promised land. So tonight I’m not worried about anything, I’m not fearing any man. My eyes have seen the glory of the coming of the Lord.”

He was clearly passionate and had a gift.

Practice your speaking skills as a salesperson

King didn’t become a great speaker overnight. He practiced. As a salesperson, you should be able to speak to your prospects well enough to understand your message. Read books and become familiar with the words, terminologies, and concepts that apply to your industry. Give yourself a chance to dive into the challenges your prospects are facing. This will allow you to understand their experiences and speak to their struggles in your communication.

A great training opportunity to become a more effective communicator is Toastmaster. It’s an inexpensive way to learn and you can go regularly to practice your speaking skills and speeches. Your experience with Toastmaster will help you get the practice you need to speak confidently. Find a Toastmaster club nearby and register as soon as you can!

He had an unconventional idea

Salespeople face problems all the time and it may be an unconventional solution that you or your client needs. Bring something to the table that is innovative for your client and it will help you stand out among the competition. The point is to think outside the box.

Dr. King was willing to take action. A great salesperson understands that in order to persuade a new prospect, they have to be seen in motion, either in service, in working or coming alongside.

This is how you convince people to take action with you as the lead. Model what you’re asking them to do.

Dr. Martin Luther King Jr. was a persuasive leader because he was able to build rapport with people and he was able to set a vision. He was also a great orator and he created unconventional solutions to conventional problems. Lastly, Dr. King was willing to take action instead of just telling people what to do.