TSE 908: Lifter Leadership-How To Innovate, Engage, Build Trust And Be Purposeful All At Once!

TSE 908: Lifter Leadership-How To Innovate, Engage, Build Trust And Be Purposeful All At Once! 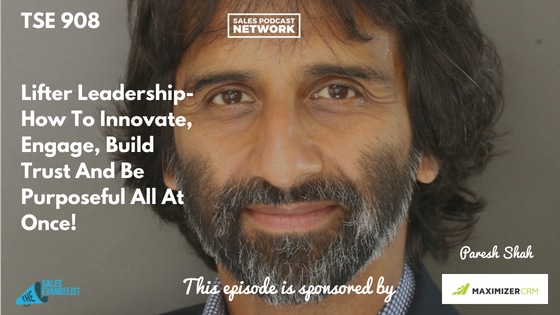 For sales leaders, improving your team’s numbers isn’t always enough. If you can help your team innovate, engage, build trust, and be purposeful, you’ll lift your team up and improve their lives. Lifter leadership will change your sales team and change your company.

On today’s episode of The Sales Evangelist, Paresh Shah, author of the upcoming book Lifters, talks about why his methodology is important for sales efficacy, and how Lifter leaders help companies address disruption and innovation.

Statistics suggest that customers only trust 55 percent of companies today, so the first obstacle companies have to overcome is distrust among its customers.

Lifters are the new leaders of the world.

These leaders help their customers and their coworkers find a better way of being. They lift their coworkers and other people around them by creating a better work environment, characterized by positivity, integrity, authenticity, value, and creative expression.

As Paresh became more mindful throughout his career, he discovered that humans are fundamentally changing the way they connect with one another.

As part of that, the model for how to transact, sell, and run and build a business was fundamentally being reset.

That led him to the Lifter paradigm, where he realized that the sales process wasn’t really about hunting for customers, targeting them, capturing them, segmenting them, and analyzing them.

Paresh realized that model no longer works. Lifters understand that it’s about helping customers, inspiring them, serving them, and lifting them. It’s a whole different model.

As a result of his shift, he’s happier, he’s making more money, his customers are his friends, and everything is working better.

1. The hunt is over. The days of hunting for your customer are behind you. It’s about serving, inspiring and lifting now.

2. Truth or consequences. We must be authentic and have integrity in everything we do as leaders.

3. “Yes and” people. They are multitaskers. They bring great value to the people they manage and to their customers because they are good at a variety of things.

4. Lifters take Invictus action. In the movie with Matt Damon, victory wasn’t winning. It was bringing people together under a common purpose. Lifters attract customers and inspire them.

We do have to take action, but we don’t do it with a poverty mindset. We shift into a generosity mindset and ask how we can help.

Paresh teaches that we are all energy. We are not separate people.

Lifter leadership shifts into a mindset of compassion, caring, creativity, and interconnectedness of everyone. We’ve shifted to a higher consciousness, and people, the younger generation especially, can feel inauthenticity.

People will quickly call us out for lack of authenticity. If, for example, we’re building wells for people in Africa, but we’re polluting a river with the byproducts of our products, people will call us out for it.

How do you show up in the moment? Are you seeing the interconnectedness of all the people you interact with?

If you don’t become a Lifter leader, you will be left in the cold.

In the early days of farming, families engage in subsistence farming in which they worked together all day every day to raise enough food to support their own needs.

At some point, non-obvious innovators had a different idea: to rotate the crops instead of planting the same crop in the same place every time. They used massive scale agriculture to change the world, and these farmers were the rock stars of innovation.

It freed up labor and people started moving to the cities.

Eventually, the Industrial Revolution began. If you were someone who could automate work processes or create a non-obvious idea for how to streamline a factory, you were a rock star.

New rock stars who understood automation and other concepts like steam and mass manufacturing eventually launched mega-companies like Rockefeller and Carnegie.

The next group of rock stars created the companies that run the world right now, like Google and Apple and Microsoft. They created a whole new world with the Internet, information, and software.

Initially, those people were nerds and geeks, and they were outcasts. They were on the fringe of society until someone realized we needed to pay attention to them.

Connect with Paresh Shah at his website where he has a diagnostic for our listeners to help them determine their Lifter capability. Visit www.iamalifter.com/salesevan.

Also, check out his TEDx video about Lifters.

If all of this sounds great to you but you still aren’t sure how to start, check out The Sales Evangelist Hustler’s League, an online group coaching program that brings sellers of all levels and all industries together to share insights.

You can also join our Facebook group, The Sales Evangelizers to connect with sales professionals from all walks of life.

Today’s episode is brought to you by Maximizer CRM, a personalized CRM that gives you the confidence to improve your business and increase profits. Get rid of the boring CRMs and customize to your team’s selling abilities.

Check out the Video Jungle podcast, which teaches you how to utilize video to stand out from your competition. Plan, create and share your way to better content and strategy. You are a brand, and video can help you set yourself apart.

Leave us a review wherever you consume this content, and share it with someone else who might benefit from our message. It helps others find our message and improves our visibility. If you haven’t already done so, subscribe to the podcast so you won’t miss a single episode.