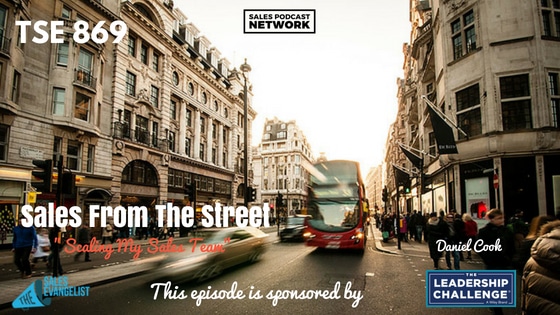 When it’s time to scale your team, there are dozens of things that can go wrong. How do you make sure you hire the right team members? What if they don’t work out? How can I make sure the people I bring are really good.

On today’s episode of Sales From The Street, we’ll discuss how to scale your team and make sure you can function and perform effectively. Dan Cook of Lucid Software shares how he created a sales team where there wasn’t one previously, and how he overcame the challenges that emerged.

Lucid Software grew from 35 employees in 2014 to almost 400 employees today. At the start of his endeavor, Dan was the only sales rep, and now the team includes almost 100 reps.

Figure out the sales process.

Before Dan could begin to grow the sales program, he had to figure out what it would look like first. He played the role of sales rep, figured out how to build a pipeline, discovered how to close deals, and documented every step of the process.

He got the green light to grow the team, and then he began the process of determining whether his success was repeatable. Could the four reps he hired repeat the same kind of success he had as a sales rep.

When things weren’t working, Dan was left wondering if the problem was the people he had hired or the system he had put in place. He had to figure out how to help them perform better.

Then, as the sales team grew to include more reps and more managers, the challenges of scaling grew in importance and sophistication.

In the early stages, Dan’s priority was troubleshooting: finding places in the process that didn’t work and determine what the problem was.

Along the way, he discovered that every person is different. Each has a different level of experience and each “grew up” in a different setting.

As a result, each has a comparative advantage in certain areas.

Dan discovered his advantage was in the process and strategy side of building a sales program. He discovered that he did not have an advantage in software sales and tactically managing the different components of the sales process. So in things like prospecting, pipeline creation, negotiation, and closing, he wasn’t the strongest guy.

He quickly learned the need for self-awareness, and the ability to identify people whose strengths can complement or supplement your own. He recruited people who had experience managing sales teams who could supplement the places he wasn’t strong.

Sales is a funny sport. You have to have a certain amount of ego in order to bet on yourself, but you also must have a dose of humility. #Humility

You must recognize that you don’t have all the answers, and that your ego can get in the way of helping the team.

Dan stresses the importance of creating a culture that allows people to ask questions. He seeks a balance between inspiring confidence in his leadership while still acknowledging that he doesn’t know everything.

Dan allows his employees to ask dumb questions, and he has worked to get rid of the competitiveness that prevents people from asking questions. He strives to help his managers be humble instead of defensive.

Be reflective and ask good questions about what you’re good at and where you know you need help when you scale your team. Be willing to hire people who complement you. When you do, you’ll create a culture that leads to positive outcomes.

You can connect with Dan on Linked In, or email him at Dan@lucidchart.com.

Lucid Chart is a diagramming application that launched in June. Lucid Chart allows users to build account maps to better understand who they’re selling to. It streamlines collaboration between teams within a company.

On this 4th of July, declare your independence from mediocre selling. The buyer-based ideology presented in Stop Selling & Start Leading: How to Make Extraordinary Sales Happen from our sponsors at Wiley will help your prospects see you as a leader. When they do, people will purchase from you instead of your competition.

Check out the Video Jungle podcast, your source for marketing and selling your brand using video. Plan, create and share your way to better content and strategy. Video Jungle offers top-notch, state-of-the-art advice about video, which is a great way to offer relevant content on LinkedIn.

Leave us a review wherever you consume this content. Share it with someone else who might benefit from our message. If you haven’t already done so, subscribe to the podcast so you won’t miss a single episode.