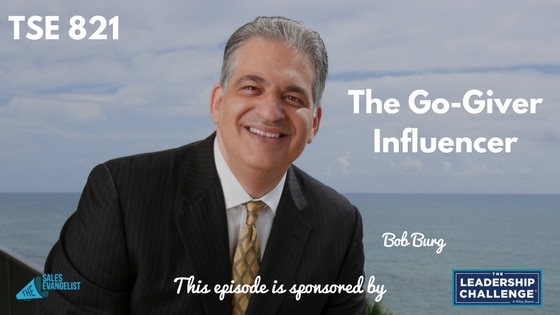 Influence is the ability to move someone toward a desired action, but there’s much more to it. It’s the ability to draw people toward something instead of pushing them toward it.

For sales professionals, influence attempts to gain commitment because it’s in the client’s best interest rather than to gain compliance.

On today’s episode of The Sales Evangelist, Bob Burg helps us understand the role of influence in sales, and where we’re going wrong in our dealings with customers.

Understand why they buy.

The goal of selling is to discover what the other person needs and wants and to help him get that.

If you are at a place in your sales career where you “really need the money,” suspend your desperation.

When you are in control of your own emotions, you are more likely to turn a negative situation into a win for everyone involved.  When you allow yourself to become frustrated, helpless, or angry, you become part of the problem.

This doesn’t require ignoring your emotions, but rather controlling them instead of allowing them to control you.

Step into the other person’s shoes.

This sounds easy enough, but the reality is that we have different sized feet. We don’t understand the other person’s belief system or world view, which originates from his upbringing, his schooling and his experiences.

We tend to assume everyone else’s worldview is the same as ours, but it isn’t the case. Our beliefs are frequently in conflict with someone else. We should always be aware of these differences.

A frame provides context. When a toddler falls down, he often looks to his parents to determine how he should respond. If they demonstrate alarm, he will too.

Setting a productive frame creates an environment in which people know how to operate. In the case of sales, it means saying something like, “We simply can’t know if this is right for you without exploring further. This conversation is a chance for both of us to make sure it’s a good fit.”

You’ve set a frame of discovering together which removes the pressure for the customer.

The law of the out says that the bigger back door you give someone to take, the less likely they are to take it.

The frame is the context of the situation, and it’s more important even than the content.

Communicate with tact and empathy.

Tact is the language of strength. It allows us to help people see things in a different way without feeling criticized.

Empathy is identifying with another person’s feelings. Recognize, though, that empathy doesn’t necessarily mean understanding how he feels; rather it ‘s an acknowledgement that he is feeling something distressing or confusing.

Choose your words in a way that won’t make the other person feel defensive or bad.

As sales professionals, we are the communicators. When we miss the target, it isn’t the target’s fault. #CommunicateValue

Let go of having to be right.

This doesn’t mean you don’t care about being right. It means you keep an open mind, and realize that you won’t always be right.

When you give up the attachment to being right, the other person tends to drop his defenses because they don’t have the sense that you are trying to win.

Your product or service doesn’t have to be perfect. Its benefits simply have to outweigh its liabilities.

“You can have everything in life you want if you help enough other people get what they want.” ~Zig Ziglar

Connect with Bob at www.thegogiver.com where you can find the book series The Go-Giver.

Check out The Sales Evangelizers on Facebook to connect with sellers of all levels and all industries. Learn what they are doing, share ideas, and compare notes with sellers from all over the world.