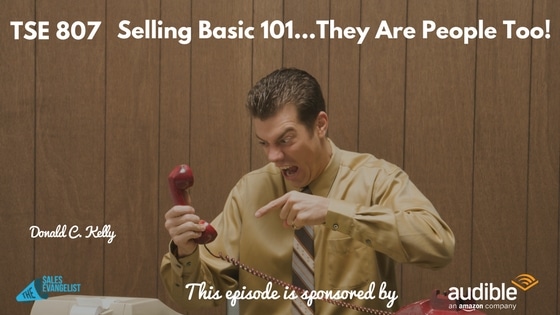 Before you do anything else, you must remember that your leads are people, too.

Before you make any attempt to respond to a lead, or to qualify a lead, or certainly to sell something, you must remember that he is a person just like you.

Who is he? Where did he come from? What challenge is he struggling with right now? What’s going on in his personal life?

Sales professionals must not think of the people around them as simply prospects or leads or people who have money.

We can do that by personalizing outreach and personalizing each contact we have with them so that we’re providing value and helping them to solve problems.

I recently reached out to a lead and we connected to determine whether The Sales Evangelist Hustler’s League might be a good option. We spent some time getting to know each other. I learned that she had left sales to raise a family and was returning now that her children were grown.

Ultimately we determined that this semester of Hustler’s League might not be a possibility for her.

A couple of days later, she emailed me to tell me a story about how our conversation impacted her family. Her son, who has generalized anxiety disorder, suffered his worst-ever panic attack, and my friend and her husband had to go meet him to drive him home.

On the ride home, she told him about our conversation. He pointed out that I had made her feel involved in The Sales Evangelist even though she hadn’t joined. It prompted her son to consider contacting the people who operate a podcast that he enjoys.

She pointed out that our interaction gave him hope.

I share this, not to toot my own horn, but to illustrate that the people we’re dealing with have sons, daughters, dogs, cousins, and challenges.

Our prospects are just like us: they are trying to solve problems and do their jobs well. #salesempathy

If you aren’t as successful as you’d like to be at closing deals, you may be struggling to build value. Check out The Sales Evangelist Hustler’s League to connect with other sellers of all levels. You’ll have a chance to learn and grow, and be more successful.

We want you to be happy, to find more prospects, to build stronger value, to close more deals, and to do big things.