TSE 799: Sales From The Street-"Full Commission" 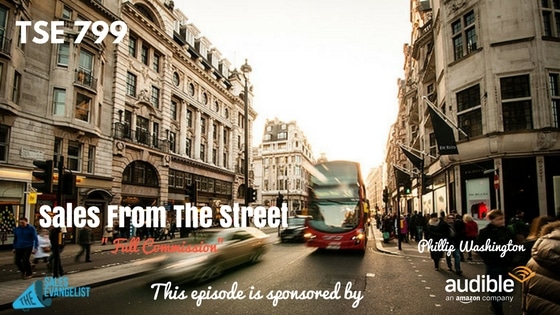 TSE 799: Sales From The Street-“Full Commission”

For Phillip Washington, Jr., the transition to a full commission sales position was a no-brainer.

It was stressful because he had a family to support. He learned from his years in sales that he wasn’t wired to do anything but sell.

On today’s episode of The Sales Evangelist, the owner of Stonehill Wealth Management and author of Retirement Investing 101 explains how he weathered the transition to full commission.

Washington’s philosophy is that you have to sell what you believe in. He went independent and switched to a pay model that meant his pay was based on the value of his client’s accounts.

He had a wife and a child on the way, and he didn’t have a predictable revenue model every month.

Washington discovered that it was the uncertainty of his situation that caused stress. He realized the stress would either cripple him or drive him to succeed.

Washington knew he could make the transition, but he had to ensure that he had enough savings to cover him while he learned a new system.

He enrolled in a sales training program that changed his system but ultimately helped him win.

Washington uses objections to his advantage during interactions with clients.

He frequently tells clients they shouldn’t fix something that isn’t broken. Sometimes he brings up objections before his prospects have a chance to do it themselves. Washington encourages clients to postpone their decisions until after they have come up with questions to ask.

The key, he says, is to be confident without being over-eager.

Washington said that learning to convince people of something has made him a better communicator in marriage.

He also believes that everyone should learn to sell, especially in a world where people fear being replaced by robots.

Pre-order Washington’s book Retirement Investing 101 or find him on LinkedIn.

If you’re involved in full-commission sales and you’d like to find the kind of supplemental training that helped Washington be successful, check out The Sales Evangelist Hustler’s League.

Our online coaching program helps sellers of all levels take their sales to the next level and help you learn from others in the sale community.