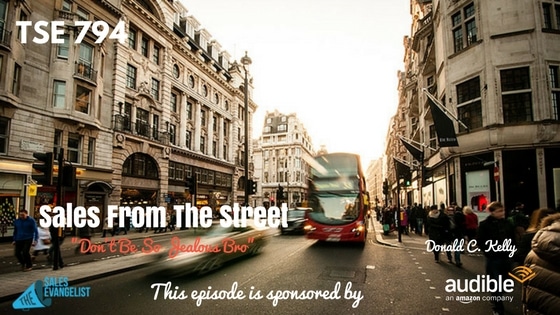 Sales professionals don’t like to admit it, but we’ve all felt jealous. When one member of the team is killing it while we struggle to close, resentment creeps in; the kind of resentment that sabotages the team.

We have a tendency to compare ourselves against other people, and our managers do it to us as well. In this episode of The Sales Evangelist, we discuss the fact that,  though competition isn’t necessarily bad, ego and pride can prevent us from improving.

My own experience with jealousy taught me that I had to make a choice: either wallow in my own pride or admit that I was struggling. #salescollaboration

My deals stalled. I built no value. While my coworker sailed through the discovery process, I watched my own deals stagnate.

She had experience in the kind of deals I was working on, and I eventually had to acknowledge that I needed her. It wasn’t easy, either, because I assumed as a man, I’d be a better seller than her.

Once I moved beyond those false notions and the jealous feelings, I noticed I was picking up important tidbits from her. She showed me how to guide the process and frame solutions for my clients. I noticed a difference in my sales.

I realized, too, that I was teaching her some things along the way as well.

Allow competition to drive you.

Competition among members of a sales team motivates us to do better.

Some of us won’t realize that because we’ll assume we can’t learn anything from younger team members. We’ll avoid asking for help from people we perceive aren’t as good or as experienced as we are.

Working alongside strong team members motivated me to work harder and achieve more. I learned to collaborate and strategize for the benefit of the whole team.

Now I’m selling more successfully than some of the more experienced people around me, but some of them won’t learn from me because of jealousy. I had to move beyond that thinking, and you should too.

We all need improvement. The Sales Evangelist Hustler’s League is a group coaching program that helps sales professionals of all levels to come together and share insights. Join us in April for the next semester, all about adding value.

It would be an honor to have you join us.