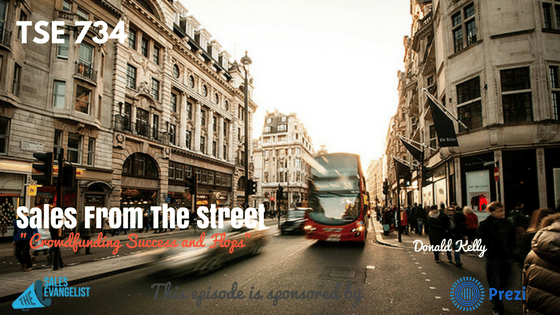 TSE 734: Sales From The Street-“Crowdfunding Success and Flops”

You probable think crowdfunding is as easy as putting yourself and your cause out there, then you expect people to find you and help you. It’s definitely more than that.

Dorothy is a homeschooling mother of five and a singer-songwriter. She is also the wife of Dustin Dauenhauer who was also a guest on the show back in Episode 719 .

She’s here today to share her challenges around crowdfunding, lessons she learned along the way, and how she finally made success happen!

Here are the highlights of my conversation with Dorothy:

Crowdfunding effort #1: They raised money to organize a benefit concert for the victims of the Typhoon Haiyan that hit the Philippines but they didn’t reach the mark.

Her challenge: To do another crowdfunding campaign for her CD that she wanted to produce. How can she make it happen this time?

2. Create a video with a clear Call-to-Action.

Dorothy didn’t have this and this is one major mistake that she saw with their campaign. Video is very powerful today. So make sure it’s a good video. It has to be short, 2-3 minutes and no longer than five. You only have people’s attention for a few seconds. Most importantly, have one, single call-to-action, which is to donate. (Don’t ask them to share.)

Never take a no as a final!

A no just means, what other angle are will they be able to help you with? For instance, ask if they can share your post to their friends. See what they can do to help.

Don’t look at supporters as people that just donate to you. But look at them as people you want to have a relationship with. They’re people you respect and you value their time. When they put their money in your project, it means they believe in you.

Results Dorothy has seen after applying these lessons:

They lowered their goal. And they ended up getting over $7000, which was the minimum they needed to produce the CD.

Connect with Dorothy on www.dorothyanne.com.