TSE 732: That Which You Believe You Can Achieve 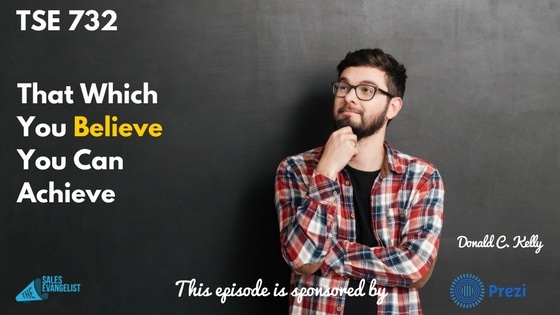 TSE 732: That Which You Believe You Can Achieve

Today, I’m sharing a story that can help you with your selling career. It all boils down to understanding that what you believe you can achieve.

I have a  friend who shares this story with different groups of people, called The Story of the Golden Pear. This is actually a tradition they do every Christmas.

The Story of the Golden Pear

There was a farmer with a wonderful pear orchard. And it was this time of the year that the harvest is just perfect. Now, this farmer had three sons and he wanted to give the gift to the king for their great harvest.

The farmer picked some of his best pears, placed them in a basket, and had his son take it to the king, with a specific instruction to take care of the package and make sure it gets delivered.

So the first one went on and on his way to the king, he found a lady who asked him what’s inside his bag. And he lied and replied he had rocks with him. Off he went to the king and when the king opened up the baskets, there were rocks! Obviously, the son was cast into jail.

Concerned about his son, the father instructed the second son to go after his brother while taking another batch of pears to be sent to the king. Off goes the second son and meets this lade. When asked what’s inside his basket, he answer pig slosh. When he got to the palace and presented his gift to the king, true enough, they found disgusting pig slosh. So he’s cast in jail too.

So he sent his youngest son to go after his two brothers and deliver another set of pears. The lady saw him along the way and asked what’s inside the basket. He said he has some of the best pears ever which are to be delivered to the king. And sure did he have amazing pears.

Pleased with the gift, the king gave him one wish. The son asked for his brothers to be freed so they can all go home. Wish granted.

Moral of the Story

Having this negative mindset, attracts negativity. What you believe is what’s going to happen to you. If you believe you’re not going to succeed, then you’re not. It’s your decision if you want to do well or not. So think happy thoughts and envision success. Know your end from the beginning and work towards that. People like optimistic people, even if you’re still new. Your thoughts manifest your actions.

Give Yourself a Gift

Make sure you have the mindset of a winner every time you go out there. Take action and believe in yourself. What did you not accomplish this year? Don’t bring that belief into the new year. Instead, believe you’re going to accomplish it and even surpass it. You can and will. Get around with the right people.