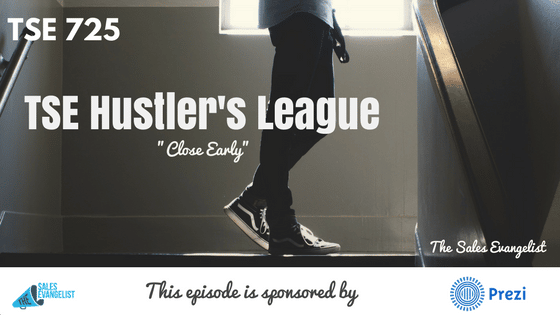 Today’s episode is another snippet taken from one of our sessions over at the TSE Hustler’s League, where we primarily tackled the idea of closing, specifically, the need to close early.

The most common mistake sellers make is they start at the beginning and they want to close the deal right away. But that doesn’t happen, typically.

You need to start early in the process to establish commitments that’s going to help the prospect close.

Some deals take months to close, even longer, especially when they still have to go through a review process within their organization.

Deals can take forever to close. But you need to understand in each stage of the process, you need to have a guideline to follow.

The key is to get them to say yes to small commitments in each stage of the process so they would eventually convert in the end.

If you’re reaching the prospect for the first time through cold call, have them make an early commitment early on.

What’s something you can do to make yourself stand out? Share with them something that may not even be thinking about.

After you share with them that need, try to share with them a white paper or something they can follow or study. It can be in the form of a video testimonial. Get their commitment to read your paper or watch your video.