TSE 691: How Winners Don’t Do Different Things, They Do Things Differently 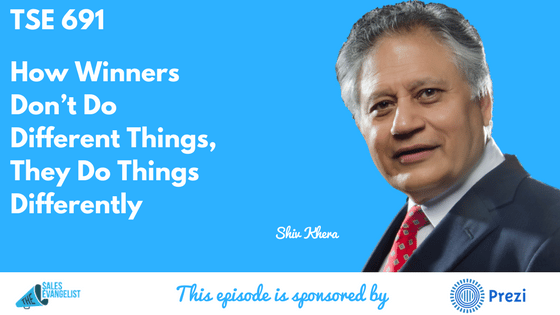 TSE 691: How Winners Don’t Do Different Things, They Do Things Differently

Today’s guest is Shiv Khera, a motivational speaker who has inspired and worked with some of the biggest brands like HP, Citigroup, HSBC, Cannon, Nestle, Philips, Mecedes-Benz, and the list goes on.

Shiv is the Founder of Qualified Learning Systems USA. He is also the author of the book, You Can Win: A Step-by-Step Tool for Top Achievers. In sales, you have to have the ability to continue especially during those tough times.

Here are the highlights of my conversation with Shiv:

How Winners Don’t Do Different Things, They Do Things Differently

Winners form the habit of doing things losers don’t like.

Winners always put in the extra effort even when it hurts.

How to Develop that Will to Win:

Selling is a rejection business. You have to take ten no’s before you get a yes. When you’re rejected, you’re not being rejected personally. Maybe the product or the product has been rejected, but not you.

Where we will be five years from now will depend on two things: the books we read and the company we keep

Read two or three books every month. Decide what you input into your head and output will be determined right there.

Success seekers are motivated, enthusiastic, inspired, and passionate. They don’t quit after the first failure. They’re persistent. Their desire to succeed is greater than their fear to lose.

Failure avoiders sit on the sidelines. They tried but they were not committed.

Be willing to do it yourself. Invest in yourself. Learn as much as you can.

Tired of the same, old PowerPoint decks? Use Prezi Business and your presentations will never be the same. Tell your story the way you want to tell it.

Connect with Shiv on www.shivkhera.com to learn more about him. Or shoot him an email at shivkhera@shivkhera.com.