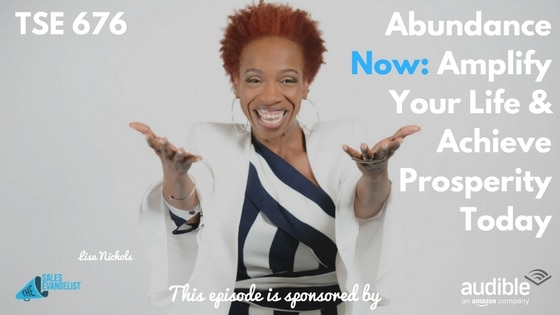 Abundance is yours – NOW.

I’m telling you – this is one episode you want to go back and listen to again.

Today’s episode is loaded with gems. We have the most sought-after motivational speaker – Lisa Nichols.

A successful author and millionaire, Lisa is a single mom.

Lisa is a transformational coach who uses education, motivation, and inspiration to get someone to their transformation. Lisa helps people how to acquire and sustain, duplicate and scale abundance.

Here are the highlights of my conversation with Lisa:

A Little Background Story about Lisa:

Lisa was considered academically challenged in school, having had a hard time learning that she thought she was functionally dyslexic on her 20s. Her highest grade in school was a C+. Her speech teacher gave her a D- and was recommended that she never spoke in public.

In 1994, she had her son and had to get on government assistance. He had to get WIC (women, infant, and children) free food. She was at an all-time low and didn’t have money to buy diapers. She had to wrap him in a towel for two days.

She remembers telling herself – “This must be the definition of being broke and broken.”

A Decision to Reinvent Herself

That time she wrapped her son in a towel for two days, she felt what rock-bottom was like made a decision that she was willing to reinvent every single part of her. She’s willing to become unfamiliar with any and every part of her journey so she can become familiar with something new.

She was willing to disrupt everything she knew for everything she thought possible. She got sick and tired of her own story. And that was the beginning…

Fall of 1995, she began to think about who she can become – period. that was the beginning of the woman we see today.

Abundance is not just monetary and access because these refer to wealth. There is a difference between wealth and abundance. You can pursue wealth, but it's not abundance.

Wealth is just the slice of the abundant pie. Abundance is a 360-experience.

Most of the time, people don't recognize the distinction between wealth and abundance until they're already achieved some level of wealth.

Abundance is not only manifested in the tangible things, but also in relationships, health, spirituality, and finances.

The sooner you go after abundance over anything else, you create a holistic 360 abundant experience.

It's not just available to some people.

Abundance is your birthright.

Regardless of what you were born into, abundance is your birthright.

Living Inside a Limiting Belief

Our limiting belief didn't start from us. It started and was embedded in us when we were three, four, five, six years old. It came from our parents and our parents' parents. It came from factors of gender, geography, culture, spiritual background. So many elements are feeding into our belief system.

If it's supporting you, hold onto it. If it's limiting, release it. Then find another belief system to hold onto.

Feed yourself a different mental food. Then you begin to produce a different physical outcome.

How to Get Clear on What You Want:

Most people think they're getting clear on what they want by really repeating what they don't want.

The more energy you expand on what you don't want, the more you're living in a contracted experience.

You're a creator. You're an artist. You are the Da Vinci of your own piece of art. What are you creating?

Every time you open your mouth or think of your life, you're creating something. What do you want to paint?

Be intentional, not reactionary.

Most people are living without creating a plan. And if you create the plan, you only have to work the plan. Otherwise, you have to keep making up the plan as you go along. Then you begin to live more reactionary than being intentional.

As abundant thinkers, we live intentionally because we already made the plan. But most people live reactionary because they didn't make the plans so they only make it up as they go along. They're reacting to life experiences.

The angel is in the detail.

If you want abundant life, what does that plan look like?

Map out your five years.

You have to make the plan at that level of detail. It will not happen exactly that way. It will be very different than what you expected. But you at least have the plan.

It's something that gets you super excited because you made this crystal clear plan.

Your thought is the gas in your car. Your emotion is the turbo-boost.

The better you can see it, the hungrier it will make you. The more you're going to taste it, the more you run to it.

Identify the smell when you walk into your new home. What's the color of your home?

At that point, emotional reaction gets attached to the goal.

Your thought is the gas in your car. Your emotion is turbo-boost.

Focus on the micro goals, not the macro goals.

We've never been taught how to do detail. We keep making macro goals and we want macro wins. But we need someone to show us that we take every macro win and break it down into 12-15 micro wins.

If you have one big goal, have three milestones to show you're getting to that goal. For every milestone have five action steps. Manage your action steps on a daily basis.

Set yourself up to win.

When you set a goal for yourself and you don't hit, then you lose a little bit of faith in yourself. So set yourself up to win.

So set a goal in a way you know how to hit and that you can clearly get there.

Set achievable goals that stretch you, not stress you.

The moment your goal stresses you, adjust the goal, the number, or the timeline. Give yourself the time to make it happen.

"Abundance is something that you expand from what you already have access to."@2motivate

Some Points from "The 12 Life-Changing Areas"

The Impact of Your Social Circle

When you speak to inspire, not to impress, your inspiration has a ripple effect because of your social circle. You may just inspire people you've never even met.

If you're surrounded by negative people, remember that you're choosing to be everywhere that you are.

If you can't remove negative people from your life, go hunt for positive people so there's a natural blend.

You are the true designer of your destiny. You are the true author of your autobiography. Write a delicious story. All that matters is you give yourself a powerful chance to be the brilliant being, the contributing angel that you've always been meant to be. Write a darn good story.

Go to www.abundancenowonline.com/free and get a free abundance checklist. Check out Lisa's book there too as well as some coaching programs