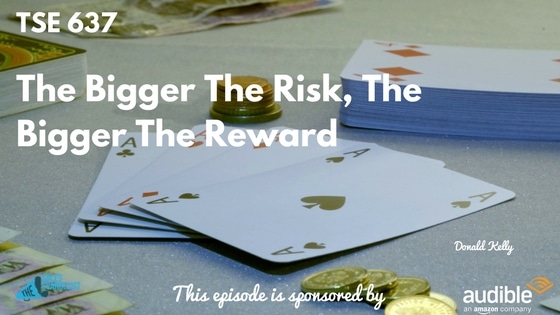 I got to work in the business board of this organization where they have these local folks in the community. We come together and help the business department bouncing ideas off each other. And one of the speakers they had spoke about this concept of taking bigger risks to get bigger rewards. Big man Grant Cardone is a big proponent of 10x-ing what you’re doing. If your goal is to make $10, make it ten times bigger and go for $100. Are you going too low? Or are you just afraid? Well, you need to raise the way you think. You need to go beyond that simple level. And this is where the idea of “the bigger the risk, the bigger the reward” comes in.

The Tale of the Broken Dishwasher

Three weeks ago, our dishwasher went out. The disposal went out so a guy came in to install a new disposal. We thought everything was working in our house until the dishwasher broke down. It turned out that the water wasn’t going through the hose from the dishwasher to the disposal which had a blockage.

So we took dishwasher apart as well as the disposal. Until we got to that one little issue that caused this entire blockage. We fixed it and put it all back together. We fixed it and made it better! We also saved ourselves from getting somebody else to do it.

Whether you’re new to sales or you’re going after a really big deal or you’re a business owner and thinking about jumping ship, sometimes you have that fear since you haven’t done it before so you should not do it. But you have to take those leaps. Take those giant steps and move forward. Take big risks.

What if you fail? So what if you failed? Is the world coming to an end? On a scale of zero to death, what’s the worst thing that can happen?

For me and my wife, it was an opportunity for us to get our hands dirty and dive in. This same principle has pushed me into many different areas. It has pushed me recently to the deals I’ve been working on. It has forced me to go deeper and go bigger.

We’re in August now and we have four months left until the year ends. You have some opportunities sitting out there. Take some risks and go after some bigger opportunities. Call some of your clients and go after some of these firms that are just sitting there. Ask them if they want to take a chance right now.  What’s the worst that can happen. Don’t let fear hold you back too often. Fear misleads us and causes us to lose out not only on money but also on life experiences.

The bigger the risk, the bigger the reward. Take those big risks. Go out today and call that biggest opportunity that you can get right now. Just call them. What’s the worst that can happen? Figure out a unique way to grab their attention and do it.

Speaking of taking risks, check out the TSE Hustler’s League. Our new semester is beginning on September 28 and we’re focusing on two groups: Sales foundational business development principles and on Building Value.

The Power of Habits by Charles Duhigg