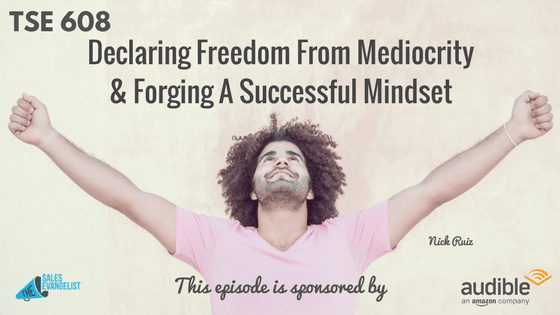 As we’re celebrating Independence Day, it’s just right to discuss how you can gain financial freedom by solving the blocks that shift our thinking from entry-level job status to understanding opportunities that breed financial success. A ton of great stuff today and you definitely don’t want to miss this!

Today’s guest is Nick Ruiz. He is a contributing author for Entrepreneur Magazine and a twice self-made millionaire. After the collapse in 2008, he lost a lot of money that led to bankruptcy. Then he rebuilt his million-dollar net worth and achieved major mindset change. He wrote a book, Success from Scratch, which is focused on helping people understand greater financial freedom.

If you’re trying to start your own business and perhaps you have something you’re doing on the side but afraid to do it, declare independence. Make a plan and do it today. I forged my own path and it was one of the best decisions I’ve ever made. It’s time for you to forge your own path today!

Here are the highlights of my conversation with Nick:

The beauty of a rough draft move

Learning from the mistakes of others:

On Nick’s book, Success from Scratch:

The Success and Food Analogy

People respond differently to certain foods. Some people experience an anaphylactic shock with peanut butter while for others peanut butter is the best source of protein for them.

Copying People You Look Up To

The Onion of Fear

Don’t get so caught up in your spreadsheets or whiteboards that you forget that you actually have to do something. – Nick Ruiz #Sales #Podcast

Understand how rough draft moves change everything. So many people are in the planning phase or in the pre-action analysis phase. The problem with that is you don’t have any actual data to assess. All you’re doing is imagining scenarios. Do the thing. Get embarrassed. Screw things up. Mess up most things. But then just pull out a couple solid things that did work and build off of that then make a move again with a more refined approach.

The amount of things you’re going to accomplish by making rough draft moves are substantial because you’re assessing what’s actually in existence. That’s the post-action analysis you want to engage in. Success has nothing to do with who you are or where you came from. It has to do with going out and making the moves. You’re always going to extract something positive from those rejections and failures and you’re going to build off of those slivers of positivity.

Success from Scratch by Nick Ruiz

Visit www.alphahomeflipping.com if you want to create real estate success from nothing or connect with Nick on Facebook and watch his reality show on YouTube.