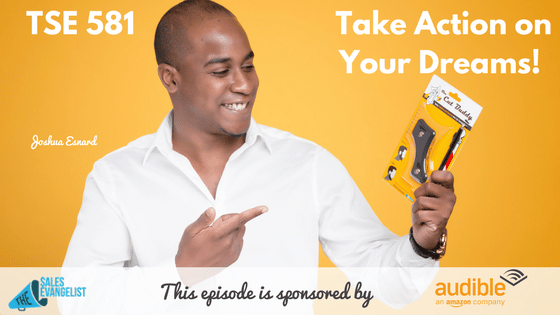 Recently, I asked on Facebook about podcasts and a friend recommended NPR podcast, How I Built This. My guest today, Joshua Esnard was featured in one of their episodes where he talked about how he built his company, The Cut Buddy. I was very impressed by him that I just knew I had to have him on this show.

Today, he shares with us some of the sales principles you can take to help build value to your own customers. And if you have some idea that’s been sitting there for a long time but you’re too afraid to take action, listen and be inspired!

Here are the highlights of my conversation with Joshua:

What is The Cut Buddy?

Joshua’s company, The Cut Buddy, is a multi-curve hair grooming guide that allows people to edge up and shape up their beards and hairlines quickly, easily, and help them save money or even earn money. The Cut Buddy was something Joshua invented when he was 12 years old and it’s just the first one of the many inventions he has drawn over the years.

Through coupon promotion deals he’d set up, it sent him into viral activity from 5-10 sales per day to 80-400 sales per day. One of his affiliate videos got shared on one DIY site which now has 11 million views (at that time, it hit 5 million views in an hour). Upon checking his emails, he found 2,000 orders when he only had 200 products.

And The Music Started Playing…

As a result of this viral phenomenon, he had to Joshua had to quit his job a month a half later. He hit #1 Bestseller on Amazon and he has been featured on famous publications such as GQ, Forbes, Black Enterprise, and NPR. Currently, it’s still the top selling product on Amazon and they’re looking to hit retail really hard and partner up with barbers and hairstylists.

Joshua’s advice to those sitting on an idea:

Don’t force yourself to try to be an inventor or entrepreneur. It takes time. Develop your ideas over six months or so. Don’t try to force it and try to save the world in one day.

“One percent every day ends up being something great at the end of the year.”

The majority of people can’t see the picture you’re building in your head so they will always discourage you on being an entrepreneur. If you plan to move forward, just don’t listen to them.

How to effectively pitch to your affiliates:

You don’t pitch an affiliate just because they have followers on YouTube. Draw out your customer profiles. In Joshua’s case, they are the fathers and mothers who cut their children’s hair, the college student who’s broke, the barber or salon stylist in training, the guy with a beard, the professional into grooming who has to shape up their hair before their meetings.

Build these customer profiles and based on those keywords you extract, these are the keywords you use to search on Google for your affiliates. For example, Joshua searched “beard grooming” and then it came up with one of his affiliates. So he looked at his following and the products he was selling. Then on he got their email on YouTube upon following them.

The most important part of your pitch is what’s in it for them without asking for too much. At the end of the day, how are they getting paid? Lead with that beyond the fact that you’re an inventor. You’re helping them with their career as well.

Reach out and offer them a coupon code to help their clients get a 10% off and that’s going to draw a lot of people to their video.

Then offer them a second benefit that if someone uses the coupon code, you will pay them, say $1.50 on each sale.

You’re basically stacking benefits for them so there’s no way they can say no. They’re shooting videos every week. They want more followers and no one’s going to say no to some money. So there is no risk involved!

Basically, they’re already doing their thing and you just want to leverage their following and make sure they’re taken cared of and at the end of the day people are ordering your product and the awareness is growing bigger.

Whenever you’re ready to build a castle, make sure that you are ready for everything that’s going to happen to that castle. It’s guarding a treasure which is your patent or service or craft. Start by thinking of how you build a castle.

Build a wall. Protect your idea and your patent.

Build a beacon system. If there’s going to be viral activity, you have to be prepared. You have to have a glove that can catch a homerun. Don’t open a shot if you’re not willing to accept certain kinds of payments or you’re not able to take on inventory issues. Just be sure to account for that in the beginning before you even start. Make sure everything is prepared and you’re ready to catch that home run ball.

Join our online workshop next week, 5 Simple Strategies to Increase Your Win Rate and get real stuff you can apply and implement into your business!

NPR’s Podcast, How I Built This