TSE 556: The Secret To Getting Response With Unconventional Email And Direct Mail - The Sales Evangelist 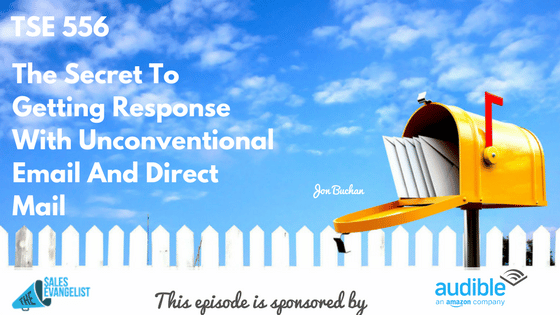 TSE 556: The Secret To Getting Response With Unconventional Email And Direct Mail

Emailing is a huge factor in the whole sales process but a lot of people are not seeing success with it. The trick is in creating unconventional emails to make you stand out from the pack. Even direct emails can be done through unconventional means as well. My guest today, Jon Buchan did just that! And he’s going to share with us some strategies on how you too can wow your prospects with the way you send emails.

Jon is the owner of the company, Charm Offensive, where they focus on direct mail and email campaigns. He is simply the best at getting the attention of busy people.

Here are the highlights of my conversation with Jon:

Strategies for cold emails that make you stand out:

Think about what they would see in their email box. The subject line and the first line are important. Figure out how you can make them smile in the very first line and how can you make them think you’re interesting. Make sure you’re able to get them-them to read the subject line, the first line, and the second line. Make them smile and curious at that time. Focus on writing something captivating that gets them to hit reply with a positive message.

Make it into almost like a storytelling them what your business is about and your ambitions. Make it brief and funny. Have at least a funny element to every few sentences that’s at least smirk-worthy. Making them smile or laugh gives them a good opinion of you before they’ve even met you.

Don’t sell too much. Don’t sell every feature and benefit. Stop convincing that your offering is the best. You’re only selling them on the idea that having a call or meeting with you is not an awful use of their time. Otherwise, you will only look like every other email in their inbox because you’re blending in with the others.

Have an honest first line to grab their attention. Focus on impact to stand out from all the other crap in the person’s inbox rather than persuasion. Without impact, you can’t persuade people anyway.

Jon puts a silly image on his image. People say it can’t work but he proves them wrong each time. People are just people. They’re human. You’ve got to take chances.

Follow this up with an email (in a few days to a week) and reference that in the subject line (be sure to include something unusual) and this will increase your open rates to over 80%.

Direct emails grab their attention for the next five minutes (if it’s good and if you’ve got something distinct).

Give them at least three different options. Listen in to find out how Jon does this. It’s hilarious!

Look at what you’re sending and see if it’s entertaining and different from what everybody else is sending. Stand out and be daring. Test things out and don’t assume that because of their senior people, they’re the most boring people in the world and you have to be super serious. Amazingly, everyone is human even the really senior people. You’ll be surprised what happens just by being distinctive.

Join the Charm Offensive Facebook group and The Sales Evangelizers.

Check out @LiveStreamKatya, the LiveStream Strategist

Influence: The Psychology of Persuasion by Robert Cialdini