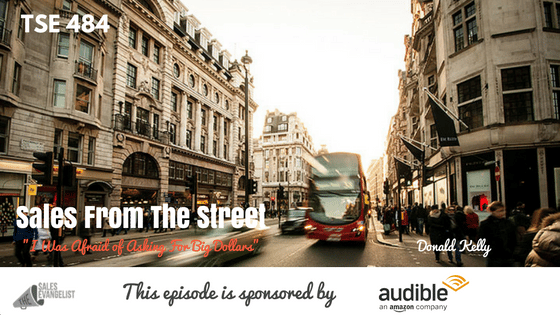 TSE 484: Sales From The Street: “I Was Afraid of Asking For Big Dollars”

Today, it’s my turn again to share the struggles that I’ve had. I was that sales guy. I’ve done pretty much everything — door-to-door, IT training classes, appointment setting, etc. I’ve sold almost everything from Dish Networks to medical services, EHR records, until I settled in software where I sold document management solutions.

I launched The Sales Evangelist as a little side project (for which I’m doing it full-time now) until it grew to a point where people asked me for some coaching and training and I helped them develop some processes and put the system in place. I also have the TSE Hustler’s League, an online group mastermind and coaching group.

I love speaking and it’s obvious since this is the 484th episode. I love to be behind the mic. I am also being given opportunities to speak at conferences or small groups. And when they asked me how much I charged for my services, I didn’t know how to do that. This was a big challenge for me.

My greatest challenge – Asking for more

And then my clients started to tell me that their lives are being changed. Once I started to see and believe that the things I have to say can change sales teams or motivate an organization or a group of people and they’re seeing great results out of it, this gave me the confidence to start asking for more.

I finally overcame that limiting belief that I could not get that much money. What are some limiting beliefs that you have? If you have the value to bless or help somebody’s life then ask for it. If they’re going to get that ROI, ask for it. It is your moral obligation to do so.

I used to charge low for coaching at one point and then I realized that the people weren’t doing the things I was coaching them on when I was charging them lower fees. And then when I raised my coaching fees, I saw people were applying the stuff I was giving them and they placed more value on it. Their lives are transforming. But that came as a result of me asking for more money.

Don’t be afraid to ask for more if you have something of value. Ask for it because people will feel and see your confidence. They will apply your stuff and they will see great results.

David and Goliath by Malcolm Gladwell

Steal the Show by Michael Port