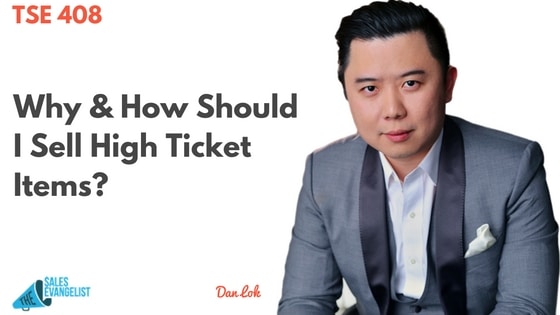 If you were to spend all of your time selling a $10 item when it takes the same amount of effort and work to sell a $100-item, which one would you sell? The higher price of course. However, a lot of people are finding it too difficult to sell high ticket items or upsell to their existing clients.

Today, we’re breaking down the barriers that hold people back from selling to the affluent class as I’m bringing in Dan Lok on the show. He is a serial entrepreneur, a captivating speaker, a bestselling author, and the host of the podcast Shoulders of Titans. We’re talking about a man who as a boy immigrated to North America with no money, started his own business in high school, failed at 13 businesses because he didn’t know what he was doing until he reached his turning point. Today, Dan is the founder and business partner of 21 companies, making eight figures a year and still growing. His mission is to impact a million entrepreneurs worldwide.

Dan is a self-proclaimed master salesman (and you’ll understand why after listening to this episode). This is one of my top favorite episodes so learn from Dan as he shares with us a ton of immensely valuable insights that will surely change the way you look at selling, especially when talking about high ticket items.

Here are the highlights of my conversation with Dan:

Why you should sell high ticket items:

People who pay higher ticket items don’t complain. It’s not just about making more money. By charging more, you’re not only doing yourself a favor, but also doing them a favor because when they invest more money, they take the whole thing much more seriously. People vote with their wallets.

How to establish value to sell high-ticket items:

Most people have a difficult time selling high-ticket items to clients because they’re not affluent clients themselves. They project their own value to their prospects.

Read what they read. Ultra-affluent and affluent customers think very differently than you. Report says that the average people who read Forbes or Fortune magazine has a net worth of around $400k while people who read the Robb Report is $4M. From their perspective, Mercedes Benz is a poor man’s car and you don’t see this on those magazines but you see Ferrari’s or a $100k-pen. By reading those kinds of magazines, you get to expand your comfort. Hence, change your belief about how you see money and how they think.

Many times it’s not the product anymore but the entire experience that the minute clients walk out of the car, it’s completely different. It’s not just selling a commodity anymore. How do you create a perception that you are worth and you deserve their money?

Just because you’re struggling with paying the bills and selling, don’t be desperate. Affluent people hate people who are desperate and they can smell that from afar. You want to be calm and professional. Don’t fast-talk. Very few people know how to sell to the affluent.

Challenge yourself and say, how high is high? Who gets affected the most during recession are the middle class and the poor. Sure they could lose money but they’re still going to have a lot versus people in the middle class.

Selling high tickets items are often based on relationships. When you’re selling for that kind of price, RELATIONSHIP comes FIRST. Whoever is buying from you, their friends are similar. So value those relationships.

How the affluent class do deals:

How to get among affluent people:

Immerse yourself into their environment.

Get a nice suit (seriously). You can’t get rich looking poor.

A perfect example: Dan increased his closing rate from 10% to 25% doing the same presentation but wearing a different suit.

Attend events they attend. Go talk to them first without selling. Meet with some of them to cultivate the relationship first. Rich people are very generous. When you ask for their help, they might just introduce people to you. But go out there with a mindset of adding value and not pushing your product. They can see through you. How can you help them? Always come from a place of abundance then add value.

People talk about the fear of failure but the fear of success is a bigger problem. They know what it’s like to fail, What they don’t know is what it’s like to be successful. Go out there and immerse yourself in those environments. Be very cautious on how you’re conditioning your mind. Immerse and surround yourself with an environment of wealth and success. Don’t talk deals at Starbucks or McDonald’s. Talk deals in a 5-star hotel and start with that.

The Great Depression Ahead by Harry Dent

Please support us in our Indiegogo campaign, a movement to inspire others to Do Big Things. Simply go to www.DoBigThings.net.