TSE 327: How To Close The Deal - The Sales Evangelist 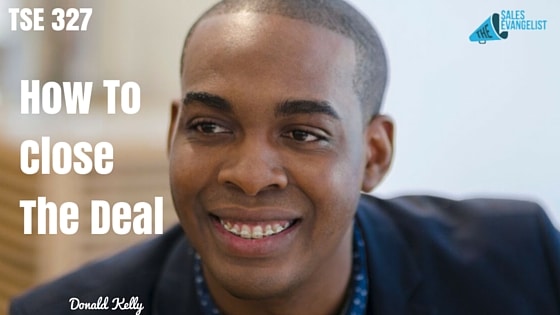 A lot of people are having a difficult time closing deals and we tend to put so much emphasis on the close that we actually start to miss. You start to think ahead and that could mess you up. Now if you would relate that with playing football, you basically take off before you actually catch the ball so you missed the catch. Because you were so focused on the next step, you practically missed what you were currently doing.

As a seller, we put so much emphasis on the close. Now what if you treated it just like anything else? Just like walking where it becomes a natural part of you?

Don’t put so much mental emphasis on the close that you trip and mess up. Don’t just swing without hitting anything. Simply think of it in a natural way.

The best way to close a deal is to never skip the process you’re in right from the very beginning. Here are some strategies to help you close the deal for real:

You need to be able to come across as an expert so you can move the problem from being status quo to finding a solution.

They can’t do anything unless they have the money.

Early on, make sure they understand that the challenge that’s causing them pain must be alleviated. Emphasize they’re losing something if they’re not doing this.

Before meeting with the prospect, give them the opportunity to say no. If you get them to say no, then that’s awesome so you can focus more on people who are going to say yes.

Again, don’t put too much emphasis on closing or else you might just fumble in the end. Once you’ve done all the things early on in the sales process, finding out their real challenges and they know they need to move, and you’ve demonstrated how you can help solve their problem then it would be easier for you to naturally close it. Assumptive close works well. Make it as natural as possible.