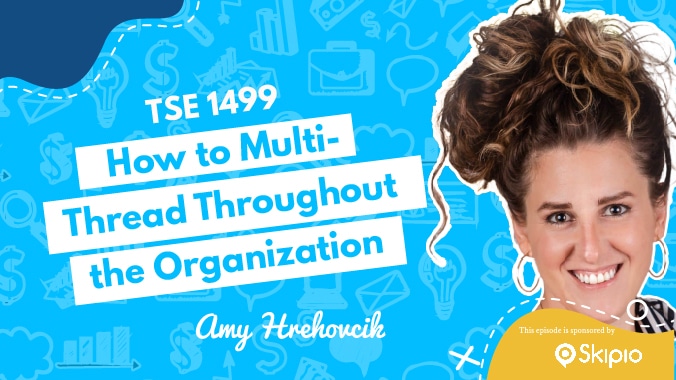 TSE 1499: How to Multi-Thread Throughout the Organization

A common problem for salespeople is interacting solely with just one stakeholder. But in reality, involving multiple people is the perfect strategy to help deals go through (and make more people excited about them.) In today’s episode of The Sales Evangelist, Donald is joined by Amy Hrehovcik to discuss her strategy to apply multi-threading throughout your sales process.

Why should you consider this selling approach?

How can you begin to develop this approach?

One major takeaway from multithreading? Just do it. It’s like anything else- you might not be good at it at first. But with practice, you’ll begin to see success. To contact Amy, connect with her on LinkedIn to learn more about her process with multithreading.

This episode is brought to you in part by Skipio.

Are you sick of crickets? As a salesperson, the pain of reaching out with phone calls or emails and not receiving a response is real.

But all text messaging is not created equal. 85% of people prefer text over email and phone calls because they want to engage in a conversation, not listen to bots. Be more like people and start having conversations that end in the conversions you want. Try Skipio at www.Skipio.com.

This course is brought to you in part by the TSE Sales Certified Training Program, designed to help new and struggling sellers master sales fundamentals and close more deals. Help elevate your sales game and sign up now to get the first two modules free! You can visit www.thesalesevangelist.com/closemoredeals or call (561) 570-5077 for more information. We value your opinion and always want to improve the quality of our show. Complete our two-minute survey here: thesalesevangelist.com/survey.

We’d love for you to join us for our next episodes by tuning in on Apple Podcast, Stitcher, or Spotify. You can also leave comments, suggestions, and ratings for each episode you listen to!

Read more about sales or listen to audiobooks on Audible and explore their huge online library. Register now to get a free book and a 30-day trial.
Audio provided by Free SFX and Bensound. Other songs used in the episodes are as follows: The Organ Grinder written by Bradley Jay Hill, performed by Bright Seed, and Produced by Brightseed and Hill.