TSE 1390 - How To Successfully Close an Impossible Deal at the End of the World, During a Pandemic 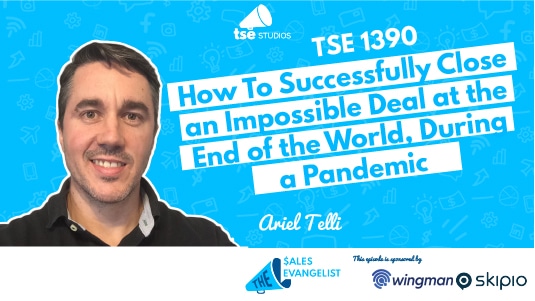 TSE 1390 – How To Successfully Close an Impossible Deal at the End of the World, During a Pandemic

Switching to the sales side

“Motivation: How To Successfully Close an Impossible Deal at the End of the World, During a Pandemic” episode resources

Click here to find the story posted on Siemens’ Healthineers website: https://www.siemens-healthineers.com/ar/news/resonador-fin-del-mundo.html (there will be a notification to convert the text to English is you want to read it. It is originally in Spanish).

Try Pipedrive today for FREE! As a TSE listener, PipeDrive is offering you an EXTEND trial beyond the typical 30 days + 25% off your first three months after trial. Try it today at  → https://pipedrive.live/tse use your code: pipedrivetse.

This episode is also partly brought to you by Wingman. Wingman uses AI-software to empower remote sales teams with conversation intelligence, actionable insights on successful playbooks, and delivers real-time coaching.

This course is brought to you in part by TSE Certified Sales Training Program. It’s a course designed to help new and struggling sellers to master the fundamentals of sales and close more deals. It will help them elevate their sales game. Sign up now and get the first two modules free! You can go and visit www.thesalesevangelist.com/closemoredeals also call us at (561) 570-5077. “We value your opinion and always want to improve the quality of our show. Complete our 2 mins survey here: thesalesevangelist.com/survey

Audio provided by Free SFX and Bensound. Other songs used in the episodes are as follows: The Organ Grinder written by Bradley Jay Hill, performed by Bright Seed, and Produced by Bright Seed and Hill.