TSE 1321: How to Virtually Forge Deep Connections With Prospects - The Sales Evangelist 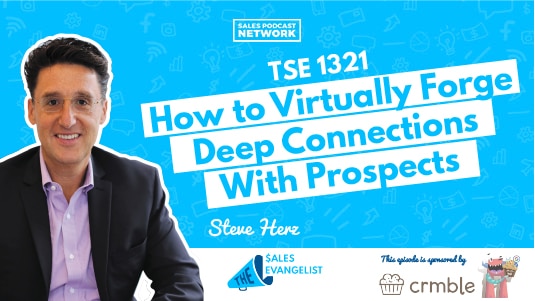 TSE 1321: How to Virtually Forge Deep Connections With Prospects

The pandemic has changed the methods of prospecting. Sales is still about connecting with people on a personal level but with so many people doing business virtually now, sales reps have to be able to do this without getting to see people in “the real world.”

Steve Herz is the president of the Montag Group, a talent agency specializing in representing sportscasters, TV newscasters, weathermen radio personalities, podcast hosts, and more. Over the last four years, however, Steve has also become a coach to executive CEOs and anyone who wants to improve their communication skills to close more deals.

Don’t Take Yes for an Answer

Steve’s book is  Don’t Take Yes for an Answer. The title might seem odd to a salesperson whose livelihood depends on a yes. In this case,  Steve means that he doesn’t want people to be surrounded by the yeses that keep them stuck in mediocrity.  It impedes your improvement.

For example, Steve was in his second year of law school, and he was one of the 30 kids working at a big law firm in New York City. By the end of summer, he was facing a verdict of either getting an offer or not. The first 29 people ahead of him received an offer. Steve did not. The managing partner told him that he didn’t have the right skill set for the job and it was suggested he go into sales, start his own company, and come back to the firm as a client. Steve reflected on this advice and it changed the trajectory of his life. This is the story behind the title of his book. He was given a life-changing no and it was the best thing for him! Steve quotes Barry Summers, who has had great success on Wall Street, who said, “The second best thing to a Yes in the business is a fast No.”

Striving for the best version of you

It isn’t your job to say yes. Your job is to bring out the honesty from people around you. Be okay with the no that will push you to become better. Show up with a healthy vulnerability that reflects your interest in growing and learning. If you strive to get better every day you open the door to a better version of yourself. This positions you to connect with people who may become your mentors.

Successful salesman vs a great salesman

To be great in sales, you need to believe you can be a success. This comes from genuinely serving the needs of others.  Be someone who knows that you are going to do your very best for the person who has entrusted their needs with you. For example, if you’re selling insurance in Florida and you know the property is prone to flooding, let the homeowners know about it. If something catastrophic happens, get them a stay in a hotel and get their house rebuilt. Exceed the expectations of a client and care about the outcome.

Steve believes that people can still forge great connections with people, even in this virtual environment. Before the pandemic, a salesperson may have made 30 phone calls but with the pandemic, may be connecting only half as much but now, it’s on Zoom. Seeing the person face-to-face has a different effect than just speaking with them on the phone. Making eye contact, even virtually, and makes the connection much deeper, especially when you’re able to discuss their life, their interests, and their needs.

When you’re able to Zoom, set aside time to do what needs to be accomplished. Five minutes is not going to be enough. Instead, set aside thirty minutes per call so you have a chance to get to know what’s important to your potential client. Get to understand their reasons for being in the industry they’re in. If you spend the time getting to know people, eventually, enough of those people will have a need for what you’re offering.  Steve has been in the business for 25 years and many of his customers/clients have stayed with him for that 25-year period. He isn’t aiming for short-term business. Steve believes that the best customers are your current customers and maintaining them while getting new ones by referral is a great way to grow your business.

As a salesperson, you need to be confident and comfortable in your own body language. Be relaxed, have good posture, and maintain eye contact. During a sales meeting make it a habit to be professional butauthentic. You want there to be a consistency of behavior throughout your life so you can show up to prospects comfortably.  Oftentimes, we don’t even know we have bad habits. You can correct that with the help of your colleagues, friends, or family members who can be an extra set of eyes on what could be improved upon.

Make it a habit to sit up straight and have good eye contact so it becomes natural when you’re in front of people. #SalesPosture

Be perceptive and acknowledge others

Make sure that the person you’re talking to feels welcome. Look at the conversation from the other person’s perspective and ask yourself:

Steve talked to his friend, Jeff, who ran a whole division in Citibank and built a billion-dollar business for the bank. Jeff was on the heavy side, however, and was told earlier in his career that he wouldn’t get a job in management because he doesn’t look the part. His performance was so strong, however, that he was promoted anyway to manage a whole division. Steve asked Jeff how he did it. Jeff explained that his boss noticed that in his division there was almost no turnover of people they considered integral to the business. It was because Jeff cared for his employees and whenever someone got another offer, Jeff would meet with them to ask if the offer was really the best thing for them. He would go over the pros and cons of taking the offer. Jeff supported their decisions either way, but he made it a point to create the chance to highlight that their company had already proven how much these employees were valued. Jeff was able to move through these meetings well because he’d already established trust. He genuinely cared about his people and they knew it.

Eric Mark is now a senior VP for the Miami Dolphins but when he and Steve still worked together he asked Steve to have breakfast with him. Eric said that he was coming to Steve to talk as a friend and a boss. He told Steve that he loved working with him but he got a job that would move him towards his dream job working for the NBA. Steve told Eric to take the job, even though he wanted him to stay, but knowing that Eric’s heart was somewhere else, he knew in the long run, it was Eric’s best move. Eric thrived in the NBA for five years and eventually got the offer with the Miami Dolphins. A decade later and they are still close.

We all need to constantly improve our mindset and the way we interact with others. No matter how successful we become, it’s mission-critical to keep learning about how to show up for people and be at our best.

“How to Virtually Forge Deep Connections With Prospects” episode resources

Reach out to Steve Herz via his LinkedIn Account! You can also visit his official website and look up his podcast from there.