TSE 1313: How to Overcome Your Fear of Prospecting

Andrew Velker | TSE 1557: Here is What We Have in Our Sales Stack and Why

View More
Andrew Velker | TSE 1557: Here is What We Have in Our Sales Stack and Why

Susie Tomenchok | TSE 1555: How to Negotiate Without Manipulating Your Prospects

View More
Susie Tomenchok | TSE 1555: How to Negotiate Without Manipulating Your Prospects

TSE 1313: How to Overcome Your Fear of Prospecting 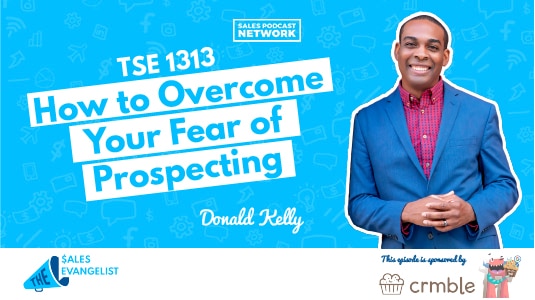 There’s a fear in prospecting that many salespeople share, the greatest being the fear of rejection. In this episode, Donald talks about what it takes to overcome fear.

Donald started his career selling security systems door to door in the summer between his junior and senior year of college. He needed the money for a non-paid internship in New York for a record company.  This first job was a difficult job as he had to knock on doors and try to sell the homeowner a security system within 45 minutes. When  Donald started he wondered if this would work but as he learned more, he realized it was the wrong attitude. The limiting belief and fear could have held Donald back.  As he moved through the sales training, however, and he watched the videos and observed how other sales reps were doing the job, he became more confident.

Donald took the door to door security sales job and after the training, really started to hustle. He didn’t just sit back waiting to be called. He knocked on doors. It was a full commission job and the deal differed from client to client. With so much at stake, Donald held onto his purpose and that pushed him to get up in the morning and continue doing his job. Every step of the way, he also had a team that guided and motivated him. His situation pushed him to really strive and make a sale.

Donald met various prospects and clients on the job. From apathetic households to people who were truly interested in getting the security system service. Donald came to realize that had he let his fear drive him away from prospecting, he wouldn’t have been able to provide help for those families who needed the security system that kept their families safe.

Sales reps have to be careful about allowing fear to keep them from doing their best work.  This can lead to an assumption that the prospect doesn’t really need what is being offered. You may even convince yourself that the prospect isn’t interested in your services without ever asking if they want them! As sales reps, it’s your responsibility to ask prospects what they want and what they need. Regardless of what you’re selling, you have to recognize that your product or service has value. You need to believe in your product and know how it can help others. There is a moral obligation to tell people how your offering can help them solve their problems.

You need a why

Salespeople need apurpose to stay motivated. For Donald, it was needing to fund the unpaid internship in New York City. He wanted it so bad because he truly believed it would help his future. That belief got him to work every day, knocking on those doors.

As a salesperson, it is important to have a system. You need a community and be in an environment that will push your sales team and motivate all of you. Even in this pandemic, you can still surround yourself with a community that will motivate you. You can go to LinkedIn and Facebook groups to find people in the same industry. If you don’t have a community, you can search for Donald’s Facebook group, The Sales Evangelizers. Donald posts every Monday and interacting with other sales professionals is a great way to stay motivated. It’s a way to keep each other accountable.

Act each and every single day

Working door to door sales is tough but Donald made sure that he was doing something daily that would give him the opportunity to close a deal. He had his reason to stay motivated, he had a great support team, and he limited his distractions. You have to be willing to put aside scrolling through social media and binging Netflix and YouTube. If you want to succeed, the only action will do it. Put yourself in a situation that forces you to act and dedicate time to prospecting or moving in the sales process.

Remember too, don’t give up on prospects before you’ve given them the opportunity to reject your offer. Don’t let that fear mentality steal your voice. It is not your job to disqualify yourself. Your job is to show up and share, bring value to the table, and help those people who need your services.

We will have fear but it can be overcome.

Are you forced to take action every single day? Put away the distractions. #SalesFocus

“How to Overcome Your Fear of Prospecting” episode resources

This episode is brought to you in part by Crmble, the easy-peasy CRM for Trello that helps you manage your contacts and leads without investing in complicated solutions, sync all your data, manage custom fields, and get powerful reporting on your sales. Try Crmble now for free at www.crmble.com/tse. This course is also brought to you in part by TSE Certified Sales Training Program. It’s a course designed to help new and struggling sellers to master the fundamentals of sales and close more deals. It will help them elevate their sales game. Sign up now and get the first two modules for free! You can go and visit www.donaldk4.sg-host.com/closemoredeals also call us at (561) 570-5077.