TSE 1302: How To Partner With Resellers To Experienced Repeatable Sales Growth - The Sales Evangelist 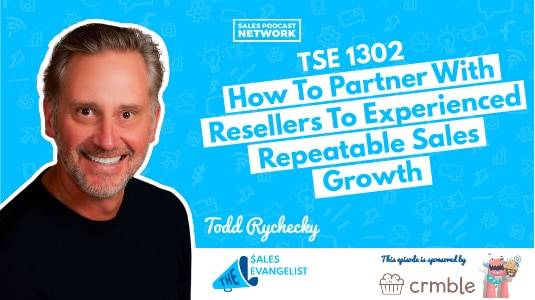 TSE 1302: How To Partner With Resellers To Experienced Repeatable Sales Growth

Sales is not just about growing your customer base but also about partnerships with a variety of people. If you want repeatable sales growth, these partnerships include businesses, other salespeople, and resellers.

Todd Rychecky is the VP of Sales  Americas in Latin America and has been with the company for the past 12 and a half years. Todd got into sales in 1991, when he was studying was pre-med in college but didn’t get in. As a result, he joined the sales force when he was 23 years old and made a huge move from Nebraska to Dallas where he worked for Whitmire Distribution, a drug wholesale company. Later on, the company was acquired by Cardinal Health and Todd continued to work for them, traveling by car, calling on hospital pharmacies, home infusion, retails stores, and retail chains.

Todd never imagined he’d be in sales but his college roommate was very passionate about becoming a salesman and Todd was intrigued by someone who knew they wanted to be in sales. When Todd started his career, he had the chance to work for a sales manager who he still says is one of the best salesmen he’s ever seen. They traveled from hospital to hospital and Todd clearly remembers his sales manager’s sense of urgency. In addition to that, he was also knowledgeable and credible and always conducted business with a big smile on his face.  With this complete package, Todd saw it was hard for anyone to say no.

Once Todd was on his own, he made his first road trip in a new company car, a car phone that cost 75 cents a minute, and an AT&T calling card. Back then, you could cold call the pharmaceutical companies without setting up an appointment, especially true in rural areas. Fast forward to today and Todd is running the Sales for the Americas. What has contributed to his success is that working for OpenGear, a startup in Australia. They originally had five employees so initially,  Todd had to do everything himself, handling inbound calls and the online chat. He knew that the company needed to win new customers so he was able to practice a variety of styles and approaches in every task and through each customer.  People would often be impressed when they found out they were speaking to the VP of Sales. What they didn’t know was it was just Todd.

Todd’s focus is now on the sales team, the partner channels, executing the sales playbook, their selling strategies, and scaling new talents and resources.

The first thing you need in order to win is a playbook that you know how to execute. Todd loves to use basketball as an illustration. When you have the ball and there are four guys standing under the basket with their hands open wide, you need to pass the ball. Teammates are important to win the game and it’s also important to stay in your lane. If your job is calling end-users then you call on the end-users. If your job is channel management, then manage the channel.

If everyone on the team can execute a playbook then you and the team will win regardless of what you’re selling. Accountability is critical as well because if team members are not accountable, then nothing gets accomplished. Without accountability, it’s difficult to count on one another.

Communication is critical to building a good culture within a team.  Todd and his team are using phone calls, email, texting, and setting up Zoom meetings. Despite the pandemic, there really is no excuse for you not to be able to communicate with the rest of your team.

Todd has noticed a change in the buyer’s journey, especially from today’s technology. Because of the internet, buyers are already 60% of the way to making their decision by the time they get to you. Open Gear is today’s number one brand in its industry. That means they already have 50% of the market share. People who come to buy, already know their name, they know the company’s good track record, and they’ve already checked the competition. Usually, their buyers have already made the decision and want to move on to the next step.

As the sales advisor,  meet your customer where they are. If they’re already 60% of the way to buying then help them with the last 40% of the journey by tailoring presentations to where they are.  For example, if Todd sees the buyer is almost ready to buy, he asks about their budget so he knows the appropriate products to suggest.

There’s no hit and run in sales

A common mistake that salespeople make is they win a deal and cut loose. They move on to look for the next win too soon. If you’re not getting new customers, you need to do what Todd calls WDH or go wider, deeper, higher with your customer base.

Other big businesses also apply this principle, including Volkswagen. They have several business units under their business units. It’s a matter of widening your reach within your reach.  You can ask your existing clients who else could benefit from your products and services within their organization. You’ll be surprised at how many people your client can introduce you to.

Salespeople who want to retain existing customers need to go wider, deeper, and higher.  Don’t go on to the next customer too soon. #SalesExperience

The idea of reselling

Todd and his team promote the idea of reselling. They started with a few partners and they have grown to hundreds in numbers. They also have two large distributors in a variety of places including Greenville and these distributors now do the processing for them.  This has greatly streamlined the process. Resellers are critical in the business because it is one of the best ways to scale a company.

Todd believes that reselling works for any industry. Having more salespeople working for you extends your reach. You do need to build relationships through trust and that means being available.

Todd’s final piece of advice is If you want people to work for you, you need to make them believe they can achieve anything that you ask them to do.

Reach out to Todd Rychecky via his LinkedIn account.