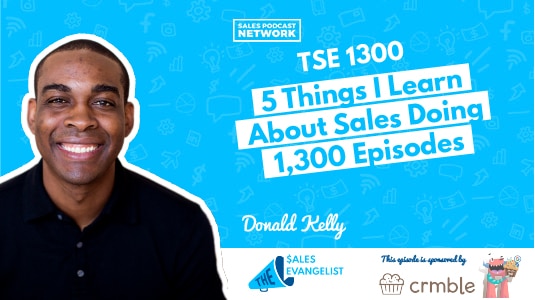 It’s been a long and amazing journey for The Sales Evangelist. Content creation and podcasting have been the core of TSE and after 1,300 episodes, there are several lessons that Donald has learned. This episode will be about all the top lessons that have come from producing The Sales Evangelist since starting seven years ago. TSE has now been able to reach halfway around the world and has been mentioned and recognized in some of the most recognized business publications such as Entrepreneur and Forbes.

We all have moments in our lives where we give up an idea. Donald is grateful that he didn’t give up on podcasting even though he came close. Having TSE has allowed him to serve people in sales and by doing so they are better able to navigate the struggles they face in their industry. He summarizes these top lessons in Five Sales Principles:

You can’t sell any higher than your level of belief

Henry Ford has a very famous quote: “If you think you can do a thing or think you can’t do a thing, you’re right.” Wayne Gretzky said it this way: “You miss 100% of the shots that you do not take.”  These words all point to the first principle. Donald started this podcast with a desire that later turned into a belief. He began the podcast in April 2013 but realized early on that it was difficult. Luckily, Jared, one of Donald’s friends, invited Donald to his podcast. That experience made Donald believe that he could do podcasts as well and served to remind him how much he loved talking to people himself.

In sales, you cannot succeed until you believe it. The same is true in life. You need to visualize your success. In sales, visualize your success before it even happens. Believe that you can get into pitch with people, close a deal, and be a great seller.  Your belief will cause you to act, lead you down a path of opportunities, and open up a social circle of the people you need to be exposed to. Donald suggests that when you go out to a prospect,  believe you will contact someone. That belief and action will lead you to the inevitable success that you desire.

Nothing happens until you prospect

Nothing ever happens until you prospect. The TSE podcasts have invited many successful people to interview and one of the common traits among these successful people is that they took action. This is true for prospecting. Nothing happens until you do something. Donald was working with a client who just released a program; however, it turned out that people didn’t know about her new program.  Even when she announced it to her community, no one actually knew of it. Donald suggested she reach out to her community and to talk to them.

It wasn’t until this client started to prospect and call people that she was able to meet her goals. She was actually able to close a deal. This happened because she asked! Too often, sales reps get timid and get worried that people will get mad at them. There’s no truth in that.

Value is in the eye of the beholder

A sales rep cannot dictate what value is. The buyer must be the one to dictate, validate, or believe that your product or service is valuable. You start the conversation by personalizing your message. Too many people make their initial contacts too generic. We generalize value propositions to all prospects without any reflection about the prospects’ current situation, needs, and what they might see as valuable. This lack of understanding hinders salespeople from having a breakthrough moment. If you sell a product by focusing on yourself, then your buyers are going to push you away.  Instead, sell a product because the buyer understands you are offering a solution to their problem. That’s when it becomes valuable. You need to look for the problem and position your product as the solution to their problems.

It comes down to personalization, listening, and asking effective questions. Taking the time to do the research will prove invaluable.

The blind side challenge

In the world of football, a quarterback always has a support system that looks after his blindside. In sales, the prospects are the quarterback and the sales reps are the support system. The prospects have a blindside because they focus on running their business. They don’t often have the opportunity to see far enough ahead and to know challenges are coming their way.

Your research will give you a better understanding of what difficulties your clients may be facing long before they see it. They’ll know you’re protecting their blindside.

Zig when everyone is zagging

Zigging while others are zagging means that you are doing the opposite of what everyone else is doing. When Donald was starting out in his podcast, he didn’t know how to interview his potential customers in a way that would make him stand out from his colleagues. He learned as he gained more experience. Some of the things he did differently was talking to companies he used to work for. He’d reach out to them for an interview and with each interview, these conversations led to more opportunities for the business. While everyone was just making cold calls, Donald was utilizing social media to get ahead. Donald was zigging while everyone was zagging.

Donald and his colleague also started a blog while they were still sales reps. They would do the prospecting during the day and create content at night. The blog content would be about particular problems their customers were facing. Customers read their content and reached out to them for problem-solving.

As a salesperson, you need to be different from the others. Utilize social media in different ways by thinking outside the box.

Swing for the fences

Salespeople should shoot for doing big things, taking massive action in order to succeed. You may need to do things outside your comfort zone like reaching out to big-name individuals. Have conversations with them and communicate with them. Not all interviews work out but just trying opens up a great exchange that could lead to bigger opportunities in the future. Just focus on defining your ideal customers and though it may be a challenge, it’s only possible if you try.

While you’re growing, keep up your podcast, create content, and blog. Donald started out not knowing if he was going to stick with podcasting and now he’s reached his 1, 300th episode. Donald has kept these principles and continues to use them to hone his sales skills and increase his sales performance. Donald continues to increase his expertise as interview experts and as a result, he gets to pass on his knowledge to you.

Challenge yourself every single day and do big things.