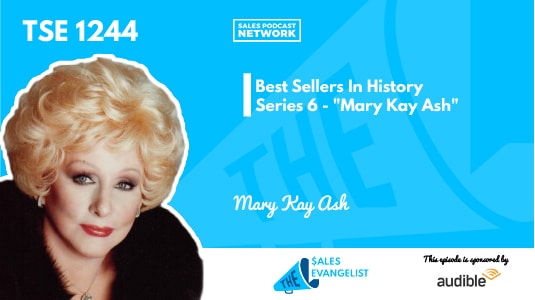 It’s the sixth episode for out Best Sellers in History series. We’ve talked about Jesus Christ, Abraham Lincoln, Benjamin Franklin, Mother Teresa, and Mahatma Gandhi. This time, we’re going to talk about someone who helped get others promoted but was overlooked for promotions herself.  She noticed how unfairly she was being treated at her job but instead of begging for a piece of the pie, she went ahead and created her own pie! Let’s talk about Mary Kay Ash and how she built her empire from the strong skill sets she developed as a salesperson.

Mary Kay Ash is world-renowned for being the makeup and skincare queen.  Her pink Cadillac has become iconic. How did this come from someone who kept getting passed over for promotion?  Because she is considered to be one of the best sellers in history. Here are five reasons why:

Mary Kay Ash was born on May 12, 1918, in Hotwells, Texas. She took care of her sick dad for most of her childhood while her mother did the earning for the family. At 17 years old, Mary Kay married Ben Rogers and had three children with him before Ben went to war in WWII. Their marriage eventually came to an end and Mary Kay was left with three children to take care of.

She needed to make money to feed her children so she started working for Stanley Home products in 1939. She’d go into someone’s home and host parties with the sole purpose of encouraging people to buy household items. Mary Kay was great at her job and she became a top seller. By 1952, Mary Kay was hired by World Gifts. After 10 years, however, she quit her job. At that time, the sales force was mostly made up of men and no matter how hard she tried, she couldn’t get ahead because she was a woman. She saw the men she was training were getting promoted, going onto better jobs, and they were getting a much higher wage.

Had a purpose and a why

With $5000, Mary Kay used the money to build her empire. Mary Kay had a purpose.  She was a mother who needed to take care of her kids and a woman who wanted to see other women succeed. Mary Kay also had a vision that helped her achieve her dreams. She had a why.

As a salesperson, a vision and purpose can propel you beyond a bad sales day. For many people, a paycheck isn’t enough.  There has to be a deeper connection, something bigger. Having a purpose is the motivation that moves you to show up even when things get hard.

Have a purpose that pushes you to create an opportunity for the people you care about the most.

Mary Kay had a purpose that was even bigger than herself. While she wanted to take care of her family, she also wanted to create something that would help other women.

Created a vision and a common cause

Every great salesperson in this series had a vision and created a common cause. Mary Kay recognized that women were undervalued in the sales industry and other workplaces. Women were not considered as capable as men.  This misconception prompted Mary Kay to build an empire that would give women the opportunity to succeed and do more. Her business opened doors for women to become six-figure earners and as a result, became the breadwinners for their families and they had a community where they were valued. The company grew and by the end of its second year, it was making $1 million in product sales.

A salesperson can also achieve greater success if they can communicate a common cause to their clients. Creating a brand message that solves problems and identifying a common struggle can create a unifying purpose.

Had a strong and impressive work ethic

Mary Kay had an impressive work ethic and worked hard. She got up every day at 5:00 AM. She said, “If you get up at 5 o’clock three times a week, you’ll gain an extra day. You need to try it a few times because you realize a great feeling of satisfaction at 8:00 in the morning when you’ve already finished what would have taken you six hours to do after 8 o’clock because of the interruptions.”

Make it your goal to wake up early, put in the time, start working, and be productive without the distractions. Give yourself an opportunity to practice and challenge yourself as Mary Kay did.

Had the desire to create and give rewards

The Harvard Business Review laid out three reasons why people leave their job:

Mary Kay understood this and set up a system with four levels of promotion:

As salespeople hit their numbers, they would be promoted to the next level, and get different rewards. This motivated people and gave them room to grow. The system made them very successful. The ultimate success for any employee in Mary Kay is winning the pink Cadillac.

As a sales rep or sales leader with a small business, give your team a path and an opportunity to grow. Give them a goal and when they hit that mark, offer a reward. They will see that as an opportunity to earn and achieve. It helps your company because you’ll have an employee who works hard to earn the reward.

Mary Kay left her full-time job and decided to create her own company but she didn’t have the capital. She borrowed the $5,000 from her son and bought the rights for the makeup and skincare brand from a previous client. Mary Kay could have used the money to save up and pay the bills but she didn’t. Instead, she saw an opportunity and she grabbed it. She struck while the iron was hot.

Don’t talk yourself out of opportunities. Be brave and take calculated risks. Reach out and make something happen. Don’t miss an opportunity because you’re afraid. Notice when you’re in the right place at the right time and position yourself around people who can help you make things happen.

Mary Kay knew how to create a vision and a common cause. #SalesWoman

Mary Kay Ash did five things right and that made her a great businesswoman. She had a reason which enabled her to create a vision. Mary Kay adopted a strong work ethic and she used the power of rewards to motivate people. Lastly, Mary Kay was willing to take advantage of the opportunities and struck while the iron was hot. Learn more about her from this link.

It’s also brought to you by B2B Sales Show with a different podcast format. It has a rotating co-host and they brought in multiple sales though leaders and half a dozen other co-hosts that are either interviewing the guests or sharing quick hit tactical content themselves from their own lessons throughout their sales career. They have multiple episodes a week.

We’d love for you to join us for our next episodes so tune in on Apple Podcast, Google Podcast, Stitcher, and Spotify. You can also leave comments, suggestions, and ratings to every episode you listen to. You can also read more about sales or listen to audiobooks on Audible and explore this huge online library. Register now to get a free book and a 30-day free trial.