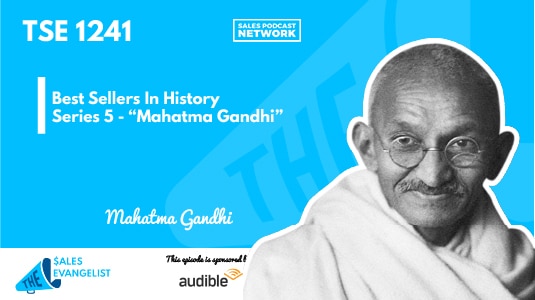 Depending on who you ask, hearing the name Mahatma Gandhi may bring up the titles of leader, spiritual guide, a person of nonviolence, The Father of India, and many more. You may think about the man who defied the British Empire. How did one man make it possible? How was he able to get millions of people to follow his ideals and eventually shape the rest of Western culture?

For this episode, we will look at Mahatma Gandhi and explore the traits that made him an influential person.

Mahatma Gandhi was born on October 2, 1869, in Pordabander, India. He studied law in London but moved to South Africa in 1893 where he spent 20 years opposing discriminatory legislation against Indians. Gandhi was from a successful family, his father a successful merchant. Gandhi’s experience in working for a law firm in South Africa led him to focus his efforts on helping those who are disenfranchised by society.

One particular day, Gandhi was riding on a train in first-class.  Being a man of means, he’d the money to pay for the ticket. However, another passenger in the first-class didn’t like that an Indian was riding there as well. The conductor tried to encourage Gandhi to move to the lower class but he had paid for the ticket and had broken no laws. He defended himself and was thrown off the train.

Gandhi went back to India and supported the home rule movement, where Indians could rule themselves, independent from the British Empire. The British had come into India and raked the country’s resources for 200 years. The British originally talked about how they were going to help the people and the economy and would create jobs, but it didn’t happen in India’s favor. Most of the money went back to England and English people started to look down on the poorer Indian people. The English people were able to take the whole of India because India wasn’t united.

The British Viceroy, Lord Curzon said that as long as they ruled India, they would be the greatest power in the world. The Indians, however, wanted their freedom and their own democracy.

The lack of unity

Imagine the same situation in the B2B world. Suppose a new client has a huge problem? They have tried to fix it in the past but they weren’t able to win against it.  As a result, they started to just live with the problem. Within the company, there could be groups of people who have great ideas on how to solve the problem but there’s nobody who is unifying them. Every department keeps doing the best they can and everyone just lives with the pain. They need a powerful leader who can recognize there’s a problem, bring all the groups together, and create a solution as a team.

Going to the masses

Unlike other politicians and wealthy people, Mahatma Gandhi spent time with the masses. This was very similar to what Jesus Christ, Mother Teresa, Abraham Lincoln, and the other personalities in this history series did. They wanted to make a lasting impression so they spent most of their time with the masses. If you want to make a massive impact, you need to go to the people.

The same is true for Mahatma Gandhi. He went among the people and built relationships with them. He tried to understand what was going on in their everyday lives. This allowed him to see the challenges they were facing as the oppressed people of society. He was able to articulate their problems and speak for the people. He became the unifying voice.

Much like with Mahatma Gandhi, sales reps need to understand their clients’ pain and see where they’re coming from. You shouldn’t just be a salesperson who comes in trying to get the money and resources.  You are a person who should be able to identify with the pain of your clients. Being able to relate to people at that level will earn you their trust. People will respect you and have confidence in you. They don’t give you money for anything. They give you money because they believe you can solve their problems. Build rapport and talk to your customers regularly.

How can you do that?

As a sales rep, it is important to build rapport, understand where they’re coming from, learn about their challenges, and be involved with their lives.

Give them a solution

The second thing that Gandhi did was that he gave people a solution. He wasn’t focused on raising an army of who would fight the enemy on the battlefield. He didn’t have an army but he was able to suppress and bring down a British Empire without having to set foot on the battlefield. Gandhi gave them an unconventional solution to a conventional problem. If he had tried to fight the British in a physical battle, he would have faced an uphill battle.

The British didn’t know that. As a salesperson, adopt a mindset different from other salespeople in your field. Instead of trying to fight a losing battle,  look for another strategy. Do the opposite of what everyone else is doing.

For instance, Gandhi boycotted the British mill and textile industry and that hurt the British economically. Because Gandhi had built a good relationship with the people, they listened to Gandhi.

Gandhi presented an unconventional solution. One of Gandhi’s significant protests wat the Salt March. The salt tax affected mostly poor people. Even though India had salt as a resource, they weren’t able to use it and instead, had to buy salt from England. Seeing the problem, Gandhi started a protest that gained momentum as it went on.

As a B2B sales rep, think of the ways you can solve your clients’ problems and look at it from an unconventional standpoint. Do some research and look for unique ways to solve their problems. Always bring something to the table your competitors haven’t done before or don’t already do. Be a new resource, think outside the box, and paint outside the lines.

If there is a bid and you’re up against competitors who are trying to solve the same exact problem, try to look at it differently so you can provide a different and better solution. Even head to head with all things remaining constant, you can still find ways to stand out.

Every problem needs a great solution. That’s where salespeople come in. #SalesSolutions

Translate their pain into words and feelings

The third trait of Gandi is the ability to translate peoples’ problems into words and feelings. He was able to paint a vision for them of what life would be like in an independent India.

Say a company offers sales training. Instead of saying what the training is all about, we paint a picture of what the company and profits can look like after the training. Sales reps need to dig deeper to be able to come up with specific solutions. If you want to become the top seller of your organization then you have to figure out your clients’ problems and simplify the way you present your solutions.

Death of a great man

Mahatma Gandhi was eventually assassinated and at his burial, over 1 million people came to mourn. He was known as the person who inspired nonviolent solutions. People followed Mahatma Gandhi because he helped with a sincere heart and a mind for the people.  His protests weren’t just political stunts. He loved his people, he loved his faith, and he loved his country.