TSE 1228: Why Your Contracts Are Not Working and How To Fix Them!

TSE 1228: Why Your Contracts Are Not Working and How To Fix Them! 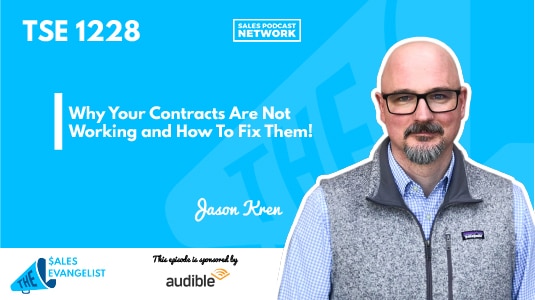 Ever asked yourself why your contracts are not working and how to fix them? Jason Kren is just the man with the answer to that frequently asked questions.

Salespeople want nothing else but to see their contracts and deals turn out for the best. Unfortunately, there are times when contracts fall off and clients don’t agree to something. How do go about fixing such contracts?

Jason Kren works for PactSafe. It’s a company that’s built from the ground up. They manage clickwrap contract acceptance at scale. This means having the ability to manage millions of clickwrap contracts at a super high velocity.

Disney+ launched its video streaming service recently and attracted 10 million subscriptions in the first 24 hours of launch. At the end of the sign-up process is a contract that states the terms and conditions of the service that users are getting. These contracts are often the highest valued contracts that a company’s legal department manages on an annual basis.

In the sales application, we can take contracts and use the platform to speed up the contracting process for sales.

The goal is to remove the friction from every step. Sales leaders can talk to their legal department to come up with a language that will make their contracts easier to accept and lessens the point of negotiation. Try to get your legal department to standardize as many contracts as possible. These contracts are often in order forms for upsells and cross-sell within the organization.

It is imperative to standardize your contracts and agree that we’re not going to negotiate there. Contracts such as these are better for the customers and for the salesperson. As part of the sales team, it is your job to start thinking about changing the language of how you talk about the contract. Most salespeople today are still using the archaic language of talking about contracts, “Hey, I am going to send you the contract and once you’re done reviewing it and signing it, then we can start.” This isn’t how you should be talking about contracts today. You can’t seed the control to the potential client and give them the reigns of the negotiation process.

What you want to say is, “Hey, if we get a clickwrap acceptance platform in place and you can standardize those contracts and the language you use, I am going to send you a link for you to accept this contract and we’ll get started.”

You don’t talk about the contract with them, you’re sending them terms that they can accept. That little shift in your language can increase velocity and reduce the friction of the contract process.

Moving away from PDFs

Another key change that salespeople can do to make contracts work is to move away from the massive pile of PDFs. You want to standardize and minimize your contracts and get them into a clickwrap to make it a one-button accept. By doing that, you increase your customer experience and your deals. This process takes so much time that you end up losing money in the end.

Let’s take for example of changing how fast your deals close.

Using the archaic method of sending over the contract via a signature platform. If your prospect is traveling and they’re on the road with just their phone, they won’t be able to execute the contract because they still have to go through a PDF process to hit certain points. This delays the closing by 48 hours or even more.

Even when you speed up your contract process by 24 hours, that will likely increase your overall sales velocity as well. Embedding a contract and sending them out via ClickWap eliminated the unnecessary process of opening a PDF format and have it digitally signed. It’s more efficient for the salesperson and for the client. Shaving a day or two in the sales cycle will greatly improve your overall revenue.

You can’t let totally let go of the signature contracts because that method is also effective in some aspects of the business such as large enterprise deals. However, when you go down to the smaller deal size at large, you’ll see that standardized contracts and the standard language can reduce friction in the sales process.

On the sales spotlight – DoorDash

DoorDash is one of the clients of Jason’s company. The Door Dash has three primary groups, they enter into contractual relationships with dashers, these are the people who deliver food. The end users are the people who download the app, and then there are the merchants, these are the ones that provide the food. It has a massive sales division that calls on the managers of the restaurants and they want to enroll them as dash merchants. They can go ahead with the signup and have their food delivered by DoorDash which then expands all the offerings to the end consumer.

Thinking about it on the restaurant manager’s viewpoint, they don’t have the most carefree job. They’re often on their feet and checking that everything in the restaurant is in orders. They definitely do not have the time to check their computers and respond to email, and process PDFs to get the contract signed. Jason’s company worked with them and now their sales team is sending out contracts through a clickwrap which is so simple and efficient. It eliminates the whole e-signature workflow.

The massive enterprise software company, BMC, didn’t have centralized control of the contract acceptance process across dozens of their product lines. They needed to take a third-party to control and enhance their contracting process. This was where Jason’s company came in. PactSafe implemented more than 10,000 different forms for their 14 products. This gave their legal department the ability to regain control over any changes to agreements that didn’t require code changes and it game them the visualization and analytics that they needed.

Doing some changes in how an organization works requires effort. Jason suggests that before making any changes, it’s best to first create a pilot program. It is important to test with a subset of your sales team so that you can refine the process and make sure it works right once you implement it in the whole organization.

In sales, you only have one shot to roll something out to an audience so might as well make it work. Create a pilot test to see the benefits it will have for your broader sales team. Once you have the process perfected, then it’s time to apply it as a whole.

There is no reason why we have to do things the old way when you can make a change to do move things faster in your organization.

essay about english composition class.
For any companies that have high volume contracts, one-clicks are the way to go. #SalesContract

“Why Your Contracts Are Not Working and How To Fix Them!” episode resources

Catch Jason Kren via his LinkedIn. He is also on Twitter with the username @jasonkren. Visit their website PactSafe as well