Luke Charlton | TSE 1598: Three Things You Must do to Write Better Cold Emails

Todd Mitchem | TSE 1597: 3 Tools to Ensure You Tell Stories that Win the Deal

Harry Spaight | TSE 1595: How to Get Past the Discouragement of the Word No

View More
Harry Spaight | TSE 1595: How to Get Past the Discouragement of the Word No 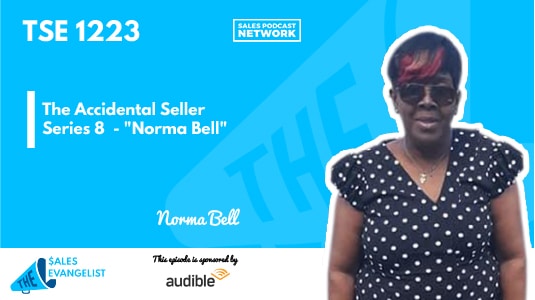 Norma Bell wanted to become a policewoman growing up because of the idea of protecting and helping people. As she grew older, however, her path took her in another direction.

After Norma decided she wasn’t going to train to be a policewoman, she discovered she had the skill to make dresses.  Norma’s older sister, Ivy, wanted to support her and connected her with a friend with the idea that Norma could be her apprentice.  As it turned out, however, the friend wanted an assistant more than she wanted to teach so the opportunity was short-lived. Ivy, who owned a small store and bar at the time, new Norma was great with people and invited her to work with her.

Ivy had a great head for business, was able to network well, could make things happen and managed the administrative details of their work.  What she was lacking, however, was the customer service skills. Her little sister, Norma, had a natural gift when it came to working with customers, entertaining people with jokes, and bringing joy to their places of business. This was especially evident when Norma worked in the store. As a cashier, even if she had the longest line, people would stand in line longer, just to wait for her. She knew the names of each of her customers and Norma made each of them feel special.  With the sisters working together, the businesses thrived.

Working as a salesperson in the shop

Norma felt good while working in the shop because it gave her the opportunity to earn money. She felt happy knowing she brought in more customers to the store and to the bar. She talked and laughed with them and she became their reason for coming back. People gravitated towards the shop and the bar because of Norma’s outgoing personality.

Seeing all the success, Norma’s husband eventually convinced her to quit working with Ivy to start her own business. She hadn’t wanted to leave but did so with her husband’s encouragement.

Running and managing the store on her own was a challenge because all the pressure was on Norma. She no longer had Ivy handling the administrative aspects of the job and the money was leaving as quickly as it was coming in.

Norma decided to close it down when the money ran out. She went to live back with Ivy.

After some time, the family moved to the United States and Norma went into customer service. She struggled for almost 4 years before things began to smooth out for her family. Despite the hardships, Norma decided to take on the challenges and opportunities the United States had to offer in order to give her kids a better life. Today, Norma enjoys the fruits of her labor through the success of her grown children, like Donald.  Even when he was young, she had dreams of Donald becoming a radio announcer. Today, she gets to be interviewed by her son! It’s a joy for Norma to listen to Donald, The Sales Evangelist, as he makes a global impact through his podcast.

You can have a great mind for business but you have to balance that knowledge with great customer service. One needs the other. #SalesProcess

You can connect with Norma and her life story on Facebook.

This podcast is also brought to you in part by Reveal the Revenue Intelligence podcast. It’s about utilizing data to make business decisions instead of just guessing your way through major sales decisions. Visit gong.io for their podcast.