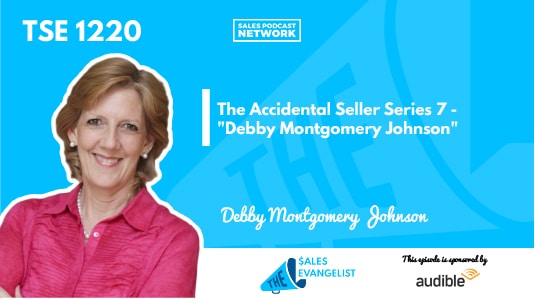 Here’s another episode from the Accidental Seller Series where we interview successful salespeople who didn’t start their careers with the intention of going into sales.

Debby Montgomery Johnson is the president of Benfotiamine.net. Most of Debby’s family members are in the medical field and growing up, she wanted to be an anesthesiologist. It was during middle school when she worked at a hospital, she thought being an anesthesiologist was cool. When she got into high school, she discovered medicine wasn’t for her. Her interest was in languages so she studied French, Spanish, and a little bit of German. Once in college, she majored in Political Science and got her bachelor’s degree.

Debby had planned to go on to law school but after she got out of college, she enrolled in paralegal school and worked for a firm specializing in corporate and family law after graduation.  Unfortunately, she was let go from that job.

Being released from her paralegal job became the catalyst for her going into the Air Force where she served for eight years, even in Germany.

Debby was working with the Pentagon as an imagery analyst and during that time, their work entailed analyzing photos from the Cold War. Till then, Debby had never really looked at the sales industry as a career. When Debby thought of sales,  thoughts of a car salesman or vacuum cleaner salesman came to mind. She didn’t really want to be a salesperson.

Debby left the Air Force when she had her third baby and started working as a bank manager. There were sales involved in her job but what she really wanted to do was assist people and help them with their finances. Debby left the job when her husband died so she could take over their company. Debby had no experience in running a company that was based on internet sales.

As she became more involved, she realized the company made more money in a month than she made in a whole year. This convinced her to jump into the business full-time. Thus her becoming a part of our Accidental Seller series episode.

Most salespeople in our accidental seller series have fears. For Debby, her biggest fear was the fact that the company wasn’t familiar with the details. It was built to help people suffering from diabetes with neuropathy. Her late husband, Lou, had the same disease.  The company offered products that worked for him and he shared a personal testimony about how each product worked for him. It was hard for Debby to really embrace the company as hers and to believe in herself when she didn’t know how the products helped their clients. She didn’t have the confidence in herself that she could actually sell.

Debby was able to get past that fear by bringing her father into the company.

Her father answers the phone and talks to clients. Being a retired dentist, he has a medical background that helps build rapport. Debby’s father also understands the chemistry side as well as the medical side of their company.

Debby’s first sale made her ecstatic. It was fun and it released her from the fear of talking to clients. She was getting to interact with them as a person, not just a client. She made it her goal to build relationships, not just transactions.

Debby has a great mindset as a salesperson. She talks to clients and only sells products that will help their specific needs. She keeps a positive outlook throughout but understands people are different and every product may not work for every person. With this understanding,  she tries to create opportunities for clients to try a product so they can see if it works for them. Instead of just trying to complete a transaction, Debby is making interactions more personal. She thinks of her clients like family and she’s willing to go through great lengths for her family.

Even with all their success, there are trying times throughout Debby’s sales experience as well. An example is when she’s calling potential clients and there is an apprehension the client will say no. Cold calls are dreadful for Debby.

One challenging client was a doctor.  Debby’s company had stopped selling the product the doctor wanted so Debby called her and left a message. When she finished the message, she started complaining about the client to her son. It was right after that she heard on her phone, “If you are satisfied with the message, please hit send.”

Needless to say, she got a phone call from the client telling her how unprofessional she had been.

It would be easier to quit than run a business but Debby has become very close to her clients and sees them as part of her family. She feels responsible for the products they take and she just can’t turn her back on that. With the mindset that clients come first at all times, she keeps on pushing on with sales.

Her husband’s death has been life-changing for her but it’s the reason why she went into sales. She has since expanded her career path and is now an advocate for relationship survivors. Debby has also started a nonprofit organization called The Woman Behind the Smile.

It’s easy to make a sale when you believe in what you are doing. #SalesPurpose

For Debby, it’s important to just jump into it when she finds something she likes. She knows if you fail, it only means you’re one step closer to your goal.

Catch up with Debby Montgomery Johnson by going to benfocomplete.com or through her email addresses,  orders@benfotiamine.net or debby@thewomanbehindthesmile.com.

This podcast is also brought to you in part by Reveal the Revenue Intelligence podcast. It’s about utilizing data to make business decisions instead of just guessing your way through major sales decisions. Visit gong.io for their podcast.