TSE 1213: How to Build A Six Figure Income Even If You’re Not Great At Closing!

TSE 1213: How to Build A Six Figure Income Even If You’re Not Great At Closing! 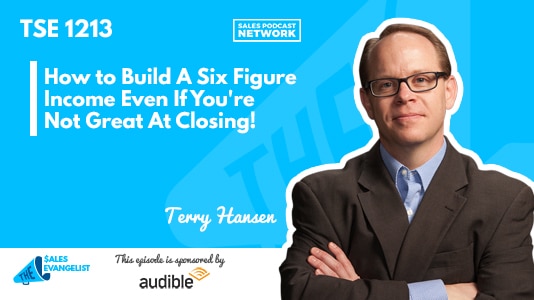 Ever wonder how you can build a six-figure income even if you’re not great at closing? Closing is one of the most important parts of sales. It is crucial and every word you utter during closing matters.

Terry Hansen hails from Idaho Falls, Idaho. His plan is simple but he still has impressive sales success stories. He’s worked with many organizations and sales reps around the country and helped them boost their sales. Throughout his sales journey, Terry has observed three bottleneck scenarios in which entrepreneurs and sales professionals can get stuck.

The first is that many struggles to increase their sales and income because they are not getting in front of the right kinds of companies and individuals. They are going at it like opening a phone book and just calling from the top of the list, hoping that someone will buy from them. Once on the phone, they don’t spend time introducing themselves, starting a conversation and making appointments.

The second scenario a bottleneck can occur is the lack of a framework to qualify customers and salespeople end up closing with people they shouldn’t. This comes from a scarcity mindset. There will always be goals and sales quotas, that have to be hit. Because of this, many people in sales end up trying to sell to without taking the time to determine whether they’re selling to their target customer. Sometimes, salespeople can close a client and later have regrets because they didn’t share their work values.

The third bottleneck in failing to close well comes from not having the right skills.

It is each of these three scenarios that can become the speed bumps that keep entrepreneurs from growing their sales.

The value of prospecting

Many sales books stress the importance of having closing techniques. You have to be a champion in overcoming objections and resolving concerns to become successful in growing your sales. Another secret to success is becoming an account manager. You need to have stellar customer service, be able to ask for referrals, take good care of your base, and keep your competitors from your clients.

Terry read a variety of books and did everything they suggested but he still wasn’t hitting his quotas and achieving the level of success he wanted. He then had lunch with a great mentor and was venting about his frustrations. Terry let him know that despite doing the right things, he was still living paycheck to paycheck. His mentor shared an illustration about two salespeople, one great at appointment setting but lousy with closing and the other, great at closing but bad with appointment setting. The first salesperson could schedule 40 appointments per month but only closed 10% of those appointments, which resulted in only four sales per month. The second salesperson lands four appointments per month. He is an amazing closer and but can only close deal 50% of the time, making two sales per month.

Terry understood that he would make more money and build a six-figure income even if you’re not great at closing by being good at setting appointments and increasing opportunities. Closing is equally important but the analogy taught him he needed to redouble his efforts in making appointments and meeting with people.

The challenges in prospecting

Prospecting is uncomfortable, scary, and awkward.  Stereotypes of salespeople being manipulative, talking a lot, listening too little, and using high-pressure tactics have to be overcome. Most salespeople don’t want to be perceived as manipulative and try to make relationships a priority. However, there can be a period of adjustment as they work to avoid reflecting on the negative stereotype.

Salespeople are having a difficult time getting past the gatekeeper and making contact with the decision-maker. Too often they leave multiple voicemails and emails with the hopes of getting a reply but typically, that doesn’t happen. The challenge is to be compelling in those initial interactions.

Terry tries to be generic in his voicemails to avoid stereotypes. The first three seconds you’re identified as a salesperson are the most challenging.  The person who is being contacted can lose interest regardless of what is being sold. It’s best to veer away from bad introductions and barking up the wrong tree. Salespeople shouldn’t just go through the phone book without a clear idea of who they want to contact. There’s no need to spend too much time trying to facilitate an introduction with people who don’t fit the ultimate goals. Doing so will delay getting in front of the clients who actually need the service or product being offered.

Salespeople should look at their top  10 best clients, profile them and get an overall sense of the companies they represent. From this information, they can build a dream list of similar companies. Use these strategies and tactics to make contact with the decision-makers: create a profile, build and stay focused on a  specific list of desired traits, and use the right kinds of tactics.

Many salespeople hate prospecting because they find it awkward. There’s already a resistance when they call companies and there’s a feeling of relief, not the disappointment when they get a voicemail to leave a message. The voicemail is now an escape. With the gatekeepers, like receptionists, salespeople have to get assertive to get to the decision-makers. The goal is to get past the voicemail and get to a person. This is an opportunity to be persistent

Instead of just saying, “Yes, please,” to leaving a message, salespeople should be a little more curious and assertive. Probing questions such as, “Is he in the office or out of the office?”, “Is he at a meeting?”, or “If you slip a note to him to let him know I’m on the line, would that be appropriate?” can move a salesperson closer to their target client.

Be persistent and follow-through

It’s also a good idea to ask the secretary if it would be okay to wait on the phone until the meeting is done, especially if they’re already wrapping up.

If the decision-maker is out of the office or on vacation, press further and ask if it’s possible to get their personal number. If it’s given, follow up is imperative.. 50% of the time, secretaries will say not but the other 50% will give the number or transfer the call directly.

Think positively and don’t assume the other person is unwilling to talk. If your persistence doesn’t work, however, then ask for someone else in the organization. The director of marketing, the human resource officer, the CEO, anyone with buying power in a decision committee can be great alternatives. These days, CEOs and presidents no longer make a decision by themselves. A vote or by committee makes the purchasing decision today. Find two or three of these people in the organization and talk to them. These tactics are not difficult but they do require you to be more assertive and persistent, not aggressive and arrogant.

At the end of the day, the way to build a six-figure income even if you’re not great at closing is to improve your skills in appointment setting. #SalesProspecting

The secret to prospecting and having conversations with decision-makers is to be more persistent, assertive, polite, and professional.

“How to Build A Six-Figure Income Even If You’re Not Great At Closing!” episode resources

Terry Hansen and his team are hosting a special online sales training workshop this week where they’ll be teaching the three secrets that salespeople can use to boost their sales revenue. They’ll be talking about how to build a six-figure income even if you’re not great at closing. You can go to salespitchmastery.com/register to attend for free by using the special link or you can attend it for $49.