TSE 1210: How to Seize Attention and Build Trust in a Busy World

TSE 1210: How to Seize Attention and Build Trust in a Busy World 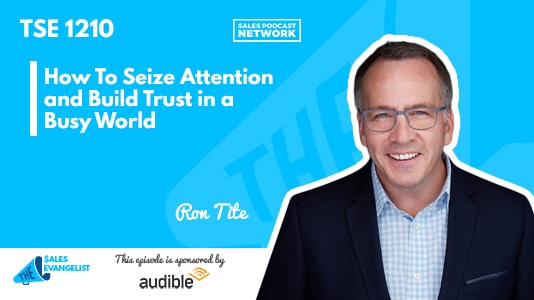 As salespeople, we look for ways to seize attention and build trust. While prospecting and building trust among clients is critical, it’s also one of the most difficult tasks in sales.

Ron Tite is the founder and keynote speaker of the Toronto-based agency, Church+State as well as the author of Think Do Say: How to Seize Attention and Build Trust in a Busy, Busy World.  Being an executive creative director at a large multinational ad agency, Ron has extensive knowledge about traditional agency marketing, advertising, and design. In addition to that, he’s also an experienced comedian, using that in his own entrepreneurial journey. Ron is also an investor who appreciates the need for sales to do business.

The desperate need for attention

Salespeople are looking at the ecosystem correctly but are using the wrong tactics to make a breakthrough. They’ve been chasing metrics that don’t deliver to build long term businesses.

There are so many thought leaders, evangelists, and LinkedIn lead generators who are going about it in the wrong way. Seeing this drove Ron to eventually build his own agency.

Time Square is a great metaphor. Everybody is in Time Square. Big corporations and companies use traditional means, such as using billboards, to get attention. Meanwhile, there are smaller sellers on the streets that are doing things differently. They are more aggressive, targeted, and their pitch can be customized. These are the people who sell practically everything in Times Square, from ripped off t-shirts to street meat. Every one of them trying to get attention.

However, the challenge doesn’t stop there, it continues. Now you’ve got their attention, how do you earn their trust?

Salespeople thrive in a busy environment by bringing respectability and credibility. They have to be aggressive and nimble in their sales approach. #SalesManagement

Other salespeople are still using the automated messages they used in the 60s when talking to potential clients. They could have customized their message and tailored it but they didn’t. They need to revamp their style with three phrases in mind: based on what you think, based on what you do, and based on what you say.

As a salesperson, the ‘based on what you think’ approach considers the things you firmly believe regardless of what you’re selling. This is important because you aren’t selling a unique product. There are others selling the same product so what you think is what makes you unique. Ask yourself,

Do you believe that:

Salespeople can be hesitant about sharing their products/services with others because they don’t want to come off as “pitch slapping.” It’s important to deliver the right message through their actions and behaviors by talking about what they do in an authentic way and transparent way.

Don’t create smoke and mirrors and say nice things just to make a sale. People are sensitive to that approach and they can see it a mile away. Use the following questions as a guide to starting your conversation.

For so long, salespeople have used many strategies to seize attention and build trust but still find it difficult to have a breakthrough. They need to customize their sales pitch and talk to clients according to their needs. There is no need to cheat the system. Rather, they have to speak to potential clients in the right way.

Invest in being good

Comedians come and go and they try a variety of tactics to make people laugh. However, nobody has sustained a career in comedy by doing anything other than being really funny. It is the same thing in sales. You can try other platforms in the course of your sales career but it won’t work unless you show your humanity and have the best interest of your clients and prospects at heart. Jumping from one platform to another may give you some benefit and short-term metrics but it won’t sustain your business in the long run.

Ron’s first project when he launched his agency was with a client he already knew. The marketing director discovered Ron was running his own agency and she gave him his first project. The trust didn’t come from Ron chasing tactics. It was due to Ron’s honesty in the business.

Red Bull is a great company that bases its marketing on the three things mentioned earlier. The company firmly believes that life with an adrenaline rush is a better way to live. They reinforce that belief by encouraging activities where their audience can have an adventure. Their advertising reinforces this message by showing people grow wings after drinking their product.

Red Bull reached out to one of Ron’s friends Matt, a chef, to star in their videos. The company said they shared Matt’s values and attitude and they wanted him on board. Despite Matt’s respect for the brand, he couldn’t push it through because he didn’t drink Red Bull. The company respected his response because they align with people based on values. They know that many respond and convert because of that approach. The number of converts exceeds those who don’t respond favorably so that’s what they focus on. Still, they just don’t walk away from people who don’t buy their products.

Looking for ways to seize attention and build trust may be difficult but resist the desire to scheme in order to turn the system in your favor. Do the hard work, roll up your sleeves, and find out as much as you can about the prospects you have. Above all, be a real human being using real conversations. It doesn’t matter if they don’t convert because that’s not your goal. You are there to add value and help solve their problems. When you focus on that, enough of your prospects will convert in time.

A section  Impossible, a book by Mark Roberto, highlights coachability as the number one value managers need to look for when hiring. Salespeople need a desire to learn and have the ability to change and adapt. It’s also important to delegate clear responsibilities to the sales team. Each sales rep can specialize in the activity in which they excel. Don’t rush the hiring process or skip steps. Hire who can do the prospecting, not just close. Don’t hire somebody and expect them to save the business or figure things out on their own.

Get in touch with Ron Tite via Twitter, LinkedIn, and Instagram. For other sales concerns, you can also reach out to Donald via LinkedIn, Instagram, Twitter, and Facebook. Use these practical sales tips and let him know how they work for you.

The episode is also brought to you by Sales Live Miami. It’s an event put on by a group of friends and it’s designed to help sellers and sales leaders improve their sales game. It’s going to be this November 4-5, 2019 in Miami, Florida. We hope to see you there! You can find more about this event on The Sales Evangelist website.