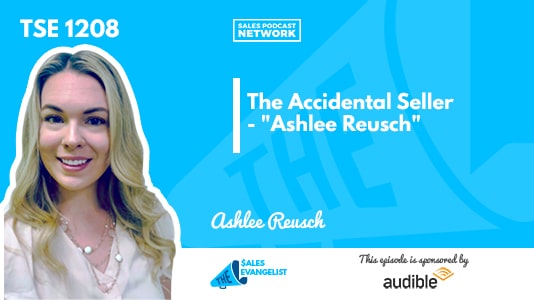 This is the third episode for the Accidental Seller series brought to you by The Sales Evangelist.

Ashlee Reusch is a business development representative at Cognos HR. Ashlee was always on the lookout for change growing up and thus wasn’t chasing a specific career. She graduated high school a year early and proceeded to go to the local community college to get her radiology technical certification.

Ashlee realized that science wasn’t her passion. The classes didn’t excite her and being a creative person at heart, she felt like the course didn’t foster that part of her. She didn’t want to sign up for endless classes to get certifications to advance her career in the medical field in the future. She was at a loss for what to do next and that’s how she fell into sales.

She was finishing her associate’s degree at a community college and was deciding whether to proceed to her bachelor’s degree at a university. But Ashlee lost her passion in science and didn’t want to invest in her education being unsure of what she really loved. He friends who studied at universities and paid tens of thousands of dollars but in the end, went back to square one because they were no longer interested in the career path they chose. She didn’t want to be in the same boat.

Ashlee talked to her dad about her predicament. He has been with the local Chevy dealer selling cars. He then suggested that she get a job and try out sales for a full year. She thought of it as an intersection where she wanted to experience the world and figure out what she wanted at the same time. That’s when she became an accidental seller.

The first few days were nerve-wracking, especially being there were only 2 women in the sales department. Everyone else was men with the average age of late thirties. Ashlee was 19 years old then. The experience was both exciting and nerve-wracking, especially since there was no sales training available. She shadowed other salesmen for a week and then she was put on the floor after that to sell some cars.

Since her dad had been in sales his whole life and both her parents were entrepreneurs owning a small art business in the late 90s and early 2000s, sales and business was nothing new for Ashlee. She also saw how her parents worked long hours. There was a lot of instability in sales and that made her think that sales was not her cup of tea. She wanted something stable with normal work hours. Sales was never part of her plan even until her college years.

The accidental seller sells for the first time

Ashlee was an introvert growing up and she likes to hang out in the background a little bit. This part of her made sales a scary avenue. It was difficult for her to talk to strangers face to face and sell them cars. Her limited training lasted only a week. She was the typical salesman but she made it her goal to be honest with her clients.

Whenever she doesn’t know anything, she tells them that she doesn’t have the answer at the moment but she’ll find it out for them. She found out that people respect honesty and humility.

She was working on a hundred percent dealership commission roll, so not selling a car means not getting a paycheck. It was a motivating factor to learn the ropes quickly. She spent almost four months before she felt like had things under control.

She moved from one salesperson’s cubicle to another to learn how to strike a deal in her downtime. She’d listen and take notes on how to handle common objections. She followed her dad’s suggestion.

A salesperson absorbs the things around him, takes what works for his style, and turns it into his own thing. #SalesPerson

A moment of doubt

Being an accidental seller means that sales isn’t your first choice and when faced with difficulties, an accident seller would tend to fold. Ashlee has her moments of doubt and thinks about quitting. When it does cross her mind, she convinces herself otherwise by thinking of all the skills and opportunities of the people she met in the sales industry so far.

It’s easy to get caught up in the negativity but it’s important to not get swayed by all of it. Her dad told her the way to get out of a rut is to sell. Whenever she feels down, she tries again.

Her first sale wasn’t that exciting. She sold to a newly married couple who were buying their first car together. It was special for them and they used a true car certificate. All she had to do was a test drive with them and make sure that they liked the car. The experience wasn’t overwhelming but the income that came with it was fun and exciting.

Moving forward, she went from selling cars to membership training for a large gym chain and made her way into the Chicago tech world. She is now working for a small outsource HR company where she helps businesses accomplish their goals every day. There’s a lot of networking and meeting other people involved. She learns about clients’ businesses and their growth goals and she helps them reach their goals.

Ashlee would do sales in a heartbeat even if she had other choices and sees no possibilities of changing anything in her sales journey. Sales gave her tons of independence and confidence. It bought her a house and gave her a great career.

Sales is difficult and it’s a roller coaster ride but when you’re in it for the long haul, you’ll be surprised with the many things you learn, the people you meet, and the opportunities you meet along the way.

Get in touch with Ashlee Reush via LinkedIn and her personal email.

With any sales concerns and questions about sales, you can reach out to Donald via LinkedIn, Instagram, Twitter, and Facebook. Use these practical sales tips and let me know how it works for you.

This episode is brought to you in part by TSE Certified Sales Training Program. It’s a course designed to help new and struggling sellers to master the fundamentals of sales and close more deals. Sign up now and get the first two modules for free! You can also call us at (561) 570-5077. Our next semester starts on November 8 and we would love to have you.

The episode is also brought to you by Sales Live Miami, an event put on by a group of friends and it’s designed to help sellers and sales leaders improve their sales game. It’s going to be this November 4-5, 2019 in Miami, Florida. Come and join us. You can find more about this event on The Sales Evangelist website.

We want you to join us for our next episodes so tune in to our podcast on Apple Podcast, Google Podcast, Stitcher, and Spotify. You can also leave comments, suggestions, and ratings to every episode you listen to.