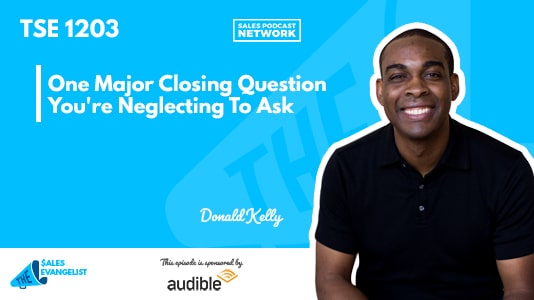 There are times when the sale is almost a done deal but at the end of the day, it’s not pushing through because there’s that one major closing question you’re neglecting to ask. This can happen to everyone, not just for the new sales reps.

That one closing question you’re neglecting to ask

Let’s take Dave as an example. Dave is a seller who is wrapping up things with Bob in a phone call. Dave gave an amazing demonstration but Bob is being wishy-washy in his response and told Dave that he is still going to analyze internally first before moving on with Dave’s deal. Now, Dave is upset, furious, and blurted out some things.

Dave could have done things differently by asking follow-up questions. Seeing it from Dave’s perspective, his outburst was understandable. He’s been working the deal for three months and he thought that he already got everything right. He already told his manager about it and he’s pretty excited for it to officially close. He needed this sale to achieve his quota.

If he remembered to ask the closing question that many neglects to ask, the result would have been different.

“Would I make  this purchase based on the same information I know if I were the buyer?”

Based on the things you’ve shared with the buyer, would you have made the decision to make the investment? Many take this for granted because oftentimes, salespeople are shortsighted.

Focusing on your pipeline

Having focus is a great characteristic, however, focusing on the wrong thing isn’t. As salespeople, we need to shift the focus from ourselves and our pipeline, rather, we need to focus on our clients and our prospective clients.

Going back on Dave, he was too focused on himself and the need for impressing his manager. He is a rising star in the company and the deal would be 25% of his quota. Everything was about Dave. Sometimes, a similar thing happens to us.

We tend to focus on ourselves and fail to show empathy toward the clients. Stephen Covey’s The Seven Habits of Highly Effective People states that the fifth habit of becoming effective is to seek first to understand then to be understood.

The outcome would have been different if Dave asked himself the closing question mentioned above. Dave was in a difficult situation. He just got promoted and he’s now in the big boy’s league, this means that he’s afraid. The thing is that all these situations that Dave is facing don’t help his potential client solve his problems. Bob has nothing in him to consider shifting to Dave’s offer. If you were Dave, you would have gone a different path. Instead of looking at your fears, you instead looked at what Bob’s company needs.

Perhaps you’d look at some studies and do some homework about Bob’s industry in relation to the software that you’re selling.

A great salesperson focuses not on himself but on what the buyer is going through and the challenges that they’re facing. #SalesTruth

Not every deal is going to close, that’s a universal fact in sales. But when you try to ask the closing question mentioned earlier, you won’t get in an awkward situation. Take for example the close rates, it’s the sales rep’s number of prospects to the number of deals converted. A 25% close rate means closing 10 deals out of your 40 prospects. The average close rate is between 15%-23%. Some people have higher close rates and others have a lower close rate.

The closing question you’re neglecting to ask should be given priority now. Ask yourself and the buyer that question. Find more of your ideal customers and have more meaningful conversations with them. Don’t be afraid to ask questions.

Go ahead and hit me up for concerns and questions about sales. You can also reach out to me via LinkedIn, Instagram, Twitter, and Facebook. Use these practical sales tips and let me know how it works for you.

The episode is also brought to you by Sales Live Miami. It’s an event put on by a group of friends and it’s designed to help sellers and sales leaders improve their sales game. It’s going to be this November 4-5, 2019 in Miami, Florida. Come and join us. You can find more about this event on The Sales Evangelist website.

We want you to join us for our next episodes so tune in to our podcast on Apple Podcast, Google Podcast, Stitcher, and Spotify. You can also leave comments, suggestions, and ratings to every episode you listen to.