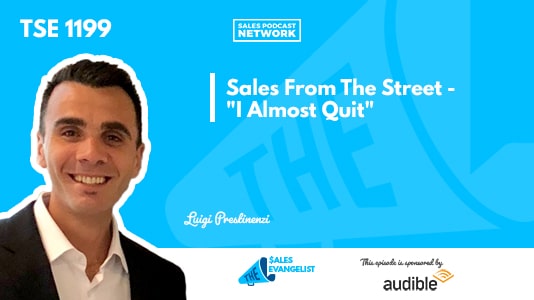 We all face challenges and sometimes, the sense of defeat is so strong that the phrase, “I almost quit,” is so relatable.

Luigi Prestinenzi struggled in his sales journey as well. His mom was great in sales and worked for Mary Kay, a global cosmetics empire. His mother won awards and was an icon within the company.

All the success, however, came to a halt when she suffered complete burnout. Luigi was seven then and he didn’t understand what was truly happening except that he saw his mom hustling and reaching her goals.

Fast forward to 23 years later, Luigi also fell on the same path. Everything was working well for him but all of a sudden, deals fell apart and they just kept falling through. It was the first time that he found himself in a challenging situation.

His manager talked to him one Christmas and he couldn’t focus on anything, not the festivities, his family, or the food. He questioned his life and his decisions and he started drafting his resume and looking for jobs. Despite that, he still went back to sales because it was his only option.

Like other salespeople who got disappointed and might have said the words, “I almost quit,” Luigi also quit – almost.

Changing the actions and mindset

Luigi made a decision to triple his sales activity to make up for the last quarter. He realized that the best way to work through it is to change his actions and his mindset.

He listened to Paul J. Meyer, the founder of the Success Motivation Institute. It was a 50-minute combination of different talks and he listened to it every day in his car. All the talks he listened to prompted him to start his pipes running again. Six months later, he closed the biggest deal in his company’s history. He also won the global sales leader award across 60 countries for that organization.

Luigi’s father was a migrant and he’d always tell him, ‘first in, last out.’ People would argue about that saying that it doesn’t foster a smart working mentality. He did not question his work ethic, but he questioned his mindset on things. He needed to change it because he’d still face the same problems at some point.

There are a lot of salespeople these days who jump from one job to another every 12-18 months. They’re good in the interview process but the moment they hit a bump, they go to the next role. He didn’t want to be that person so he kept going.

The imposter syndrome kicks in at your lowest points but that feeling shouldn’t let you down. Even when you close a deal, you somehow still feel like you just got lucky.

No matter how successful you get in the sales industry, no matter how well you execute the sales process and help the buyer through the buying process, you can never control the buyers’ decision. #SalesTalk

You can only control your mindset and the way you approach the situation.

Break it down to image and pipeline.

Get these two done and the magic will happen. Do not focus too much on the scoreboard without getting the right mindset. If you’re not getting the target and you’re struggling, just go back to the foundation of success.

Sales From the Street: “I Almost Quit” episode resources

Reach out to Luigi Prestinenzi on his LinkedIn account and check out his podcast, Sales IQ. He also talks about sales and does interviews with sales leaders.

This episode is brought to you in-part by TSE Certified Sales Training Program. It’s a program designed to help sales reps get from where you are now to where you can be in the future. This course is an aid for salespeople to become better in asking the right questions, presenting solutions, and closing deals.

If you like this episode, do give us a thumbs up and rating on Apple Podcast, Google Podcast, Stitcher, and Spotify. We produce high-quality podcasts weekly so make sure to subscribe to get more of these sales talks that matter! Share this with your friends and teach them how to subscribe as well.