TSE 1174: Why Do You Say That Failure is the Greatest Sales Lesson?

TSE 1174: Why Do You Say That Failure is the Greatest Sales Lesson? 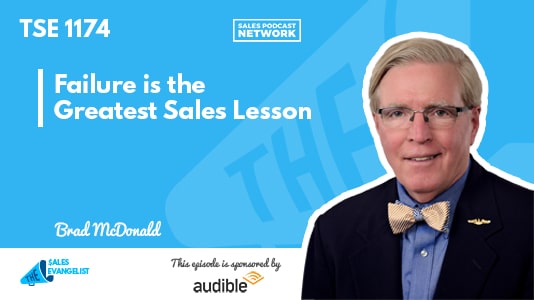 Sellers get knocked down plenty of times, but sometimes failure is the greatest sales lesson.

Brad McDonald works with Sandler Systems which has 250 franchises around the world that help businesses grow by improving their sales processes.

Brad’s 28-year career in the U.S. Navy taught him that failure could mean the difference between life and death. When he transitioned from the Navy to the sales world, he realized that many of his attempts were going to end in failure. He had to change the paradigm.

The things he perceived were failures — having people hang up on him or cancel an appointment — weren’t really failures.

Along the way, he learned to embrace failure.

You must make a lot of sales calls in order to get to yes. On the other hand, if we see the sales calls that ended in “no” as a failure, that will feel bad.

You’ll also likely get an orange gumball which might represent a buyer who wants to talk more to see if there’s interest. If you view every orange gumball as a failure, you won’t be very likely to keep going while you wait for the green ones. If, on the other hand, you understand that you have to get the orange gumball out of the way in order to get to the green one, you can embrace it.

Brad came from a culture where sailors did what he told them to do and they didn’t say no. He was surprised to find in the sales world that prospects aren’t always honest and they don’t always respect his time. And they certainly don’t feel compelled to follow his orders. Initially, all those things felt like failures.

Failure mimics the stages of grief which are disbelief, fear, despair, anger, and acceptance.

Brad refers to the “ok, not ok principle.” He came to believe that he needed to be ok being not ok.

He needed to not seek to meet his emotional needs in a sales call. Many sellers get emotionally involved in their sales calls and that’s one of the five big conceptual roadblocks in sales. Head trash gets in the way. We get excited when we’re about to make a sale and we stop doing the things we need to do.

Brad learned along the way that his focus on outcomes and results was wrong. He was excited when he made sales and dejected when he wasn’t. He discovered over time that focusing on things he could control, like activities, made more sense. He started doing the things he knew would make him more successful and he tracked those things.

Brad focused on his tonality, his demeanor, his body language and other things that were well within his control.

Brad believes that all sales problems come in one or two categories.

Most tactical problems have a conceptual basis. In Brad’s case, he came out of the Navy where he didn’t fear much of anything into a setting where he was afraid to make a cold call. The fear was a result of the beliefs he held about sales.

The conceptual issues are these:

Changing your own beliefs will take time. It’s a process.

In order to improve in sales, you’ll have to work on yourself and your own feelings about sales as much as you work on your sales tactics and other tools. #SalesPsychology

For his own therapy, he sat down each Sunday and wrote about his sales experiences. Those articles helped him process the emotional aspects and taught him to have honest conversations with his prospects.

Salespeople can benefit from journaling about their own experiences, about the perceived failures, and about the head trash.

Grab a copy of Brad’s book, The Art and Skill of Sales Psychology, or email him at mcdonald@sandler.com.

You can also connect with me at donald@donaldk4.sg-host.com or try our first module of  TSE Certified Sales Training Program for free. This episode has been made possible with the help of  TSE Certified Sales Training Program, a training course designed to help sellers in improving their performance. We want you guys to go out each and every single day to find more ideal customers and do big things.