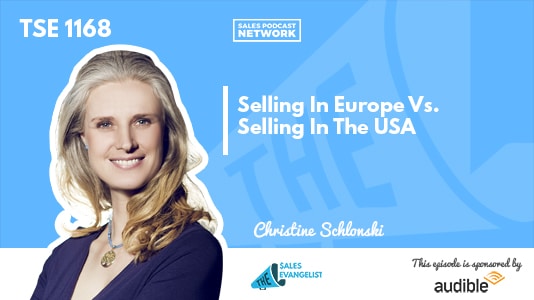 Every sales transaction differs from the others, but when you’re selling in Europe vs. selling in the USA, it’s important to understand the differences in culture.

Christine Schlonski works with entrepreneurs who have a negative view of sales. She helps them redefine their view of it so they can sell with ease, grace, and confidence and also ask their price. In short, she helps them makes sales, which is simply an interaction between people, fun.

Christine points to the depiction of sales in movies, coupled with bad sales experiences that we’ve all had. Subconsciously, we don’t want to be like these people. Women especially struggle to ask for what they truly want because it feels salesy or pushy. They often assume because they’re good people that buyers will line up to buy.

It’s possible to ask for the sale in a natural way but movies never depict sellers in a positive light. It’s likely that a movie about a seller who sells from the heart and brings value would be boring. But sales truly could be like that.

Set the expectation and then make the offer. Then consider what’s a go and what’s a no-go. How can we work together?

Sales in the U.S. move quickly, while people in Europe like time. Realize, too, that Europe isn’t a single country, and sales differ across those countries. In France, for example, sales involves numerous decision-makers, and French people love meetings. Where Americans look to make things happen, you cannot simply show up with an offer and a take-it-or-leave-it attitude.

Germans exist between those two extremes because they want to be a bit more efficient. Still, though, they cannot be pushed or pressured into decisions.

Relationships are still the key to all sales. The decision-maker needs to feel comfortable in the relationship and feel as though he is making a good decision.

Typically, larger companies have more complicated decision-making processes. They often have male leaders and sometimes one of them will block the process because of politics or a need to be right.

Selling in Europe will never be a one-call close.

Christine had experiences in the past where her work with a global company selling high-ticket events over the phone was negatively affected by her American colleagues who were perceived as being pushy. The prospects assumed that her sales process would operate the same way, so they weren’t interested.

Consider yourself as an example. How would you want to be treated during a call? What’s important to you?

Then, be open to cultural differences and be aware of misunderstandings, but understand that it isn’t a case of the prospect not liking you.

In Christine’s case, she learned to operate as though any “no” in the process was always her fault because she hadn’t managed some part of the process correctly.

She understands, too, that if she calls into the U.S. she needs to operate with the correct urgency because it’s what they expect.

Sellers in the U.S. are pretty good with small talk, but in the U.K., for example, talk about the weather can be important. Some people perceive that as a waste of time, but you must adjust to the person you’re speaking to.

Suspend your own thinking toward the customers’ needs. Accommodate them.

In the U.S., for example, people don’t give a true answer to the question, “How are you?” Instead, they’ll say, “I’m fine.” In other countries, they’ll be more likely to answer honestly.

Approach with the desire to serve their needs.

In my own negotiations with a prospect for TSE Certified Sales Training Course, I discovered during the negotiation process that many buyers from eastern Europe want to ensure that they are getting the best deal. A  friend who is also from eastern Europe told me that they’ll often expect to be able to negotiate down a bit. So even if you have a fair price, they may expect you to adjust it.

In this case, I made the adjustment because it was a win-win opportunity.

Depending on the products you sell, the price level, and who your negotiating partners are, maybe you set something in place that you can add to the program rather than adjusting your price down. Add value without dropping the price. It gives them a feeling of a win.

Businesses are always trying to get the best deal, regardless of culture.

Be true to yourself and be authentic. If you have a great product, begin with a connection. Small talk can feel superficial, so you must communicate that you’re not only interested in a sale.

Establish relationships with prospects so they don’t feel as though they are simply being sold to. Instead, offer them an invitation to buy. #RelationshipSelling

You can connect with Christine at her podcast, Heart Sells, where she interviews successful entrepreneurs who have overcome sales challenges and who operate from the heart. She seeks to showcase that sales can be fun and that anyone can learn sales. You can also find her at christineschlonski.com.

Establish relationships with prospects so they don’t feel as though they are simply being sold to. Instead, offer them an invitation to buy. #RelationshipSelling