TSE 1143: Building a Culture of Empathy and Accountability

TSE 1143: Building a Culture of Empathy and Accountability 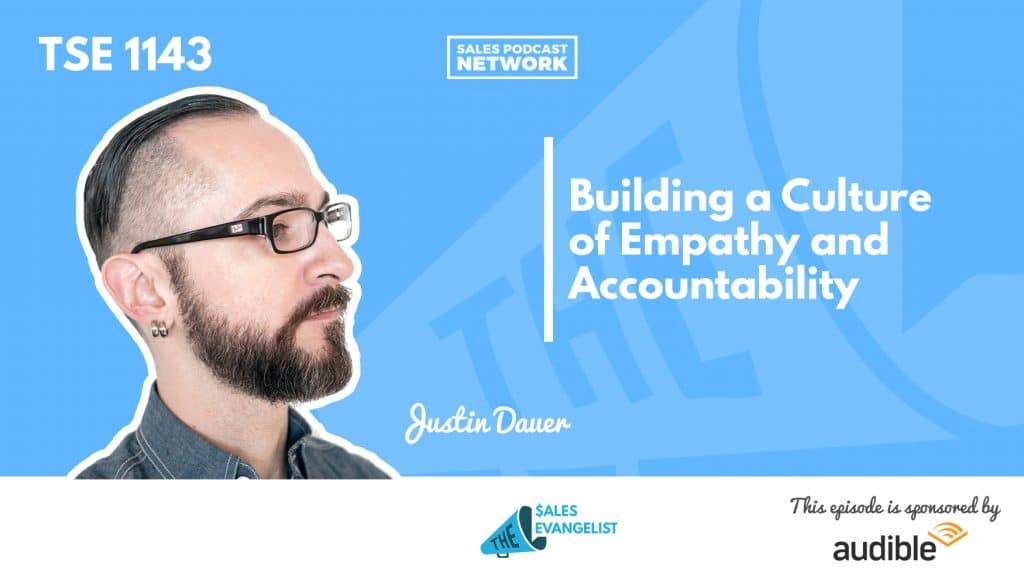 Every organization needs a culture of empathy and accountability no matter what it’s doing. Sometimes, we only have empathy and neglect accountability but it’s important to have both. Justin Dauer is with us in this episode to explain to us how to get both and give recommendations on the right way to do it.

Justin is the VP of the Human Center Design at BSwift, a healthcare and benefits management firm owned by CVS Health.  He is also a writer and a public speaker when he isn’t in his 9-5 job, and he enjoys talking about humility, empathy, and accountability.

Justin’s entire career revolves around agencies primarily in the creative direction. In his 10 years being in the business, he observed that agency culture tends to burn people out.

In some cultures, the driving factor is perceived by who went out the door last, regardless of the reasons why others left earlier. Maybe they went to pick up their kids from school or went to a doctor’s appointment. Meanwhile, whatever their reasons are, someone else in the firm is tapping a wristwatch noting the fact that they left early.

This buildup of passive-aggressive situations in the agency space resonates to many because they have experienced it too.

He got a tremendous amount of feedback so he knew it was an important topic, which prompted him to write a book about it.

Burnout has a domino effect that is detrimental to an organization or an agency, partly because agency space is often about making money. Most times, a name on a spreadsheet doesn’t equate to an individual. The name has to do the work and that’s all there is.

Justin shared the same experience before he was in a senior position. He’d come to the office and face a stack of papers, printouts, and a load of work with red lines on them. His value for the day depended on the quantity of work he could do for the day, without regard for quality in the process.

There is no room to pause in some agencies, so employees can’t do anything not work-related, even in their free time. They fear that if their supervisor walks by and sees them, he’ll ask why they aren’t working. Employees are constantly on the edge, which isn’t healthy and wears them down. But as human beings, we all need to pause and calibrate.

Another example of burnout is the cost of hiring people over and over again, which takes a toll on the organization’s morale.

Solving this takes action, not lip service. It’s good to start by demonstrating respect and humility. Humility is baked into both empathy and accountability. Humility is when a leader admits a mistake and follows up with an action plan.

Dialog is a two-way street, which means less oration and delegation but more of a collaboration. Once a mistake has been made, admit it. This is what accountability is about.

People who work in high-stress environments have little pockets of culture. They might gather in a kitchen and talk about something related to their craft. Saturating the culture from the top communicates that when they make a mistake, there’s a culture of support where people will rally around them and help them improve.

Leaders must set the tone

Leaders have to set the tone. They should be the first to trust that their employees have done their job before they leave work for personal errands. Consider, too, that some may be single parents taking half the day off to pick up their kids from school. The simple concept of trust is something that’s taken for granted when it shouldn’t be taken for granted at all.

Some organizations have a culture of fostering growth where leaders are truly leaders rather than taskmasters. When they find a problem, they ask questions, and they open a dialog to discover solutions to the problem.

The same thing happened to me in the past where my team members share stuff with me. I made a culture of discussing things with each other and it proved to be a good move. Team members share their brilliant ideas that I couldn’t have conceived on my own, and it made the work more efficient.

It is ideal to have everyone be involved in the thought process when running a workshop. The same is also true in business. You want people from C-level to people who are answering the phone in the room because everyone has a voice and that voice has value. Hierarchies should be thrown out the window.

In business, everyone’s viewpoint is important, from the stakeholders to the other people in the room with different perspectives.

Leaders should set the tone by making others feel like they are heard. The employees need to feel empowered and realize that they are appreciated and valued and know that it’s ok to have an outside viewpoint. #Culture
Click To Tweet

Sales leaders and managers must be cognizant of what the new hire thinks when they come in. They have to be aware that they won’t be scoffed at and demanded to go back to their desks when they get coffee from the coffee machine. They need to know that they are not chained to their desks and that they are allowed to work on another floor or to take their laptops outside if it’s not against company rules.

Another way to create a culture within the organization is through simplicity. People will more likely engage with things that are simple and easily understood.. Simplicity is also clarity which is one of Scott M. Cutlip’s  Seven C’s of Communication. What you’re saying should be exactly what you mean.

Government Digital Services in the UK fosters this kind of cultural sense. They put up signs that say ‘It’s okay to x’, that it’s okay not to check their email after work, that it’s okay to have a day-off, and that it’s okay to pause and talk to their coworkers. These are simple and clear and people engage in them. It makes sense for businesses to do this as well but it’s still put by the wayside.

We did this in one of the companies I worked for where they gave us a Wii. It was super cool and we could play the Wii to destress and have a good time. The company was a small organization and we got all the people to be in the break area for 10-15 minutes and play Wii bowling. But then the sales leaders saw us playing and told the CEO about it. They told us that we could play it either before work or after work, and nobody touched it since.

It was the culture that killed it. We could have had that 15-minute break and then go back to our desks afterward but the culture says that you can’t have fun. It says that growing a business and growing sales can’t be fun. This goes to show that when you don’t have the culture built from the top then clearly, you’re in trouble.

The danger in perks is that sometimes it can take away one’s individuality, too. Some big tech companies have sleeping pods where you can zone out for a little bit. They get you a cab or buy you dinner if you work beyond 9 p.m. or they send someone to get your laundry at home. These perks look good on paper but they keep people in the office and squeeze more hours out of them and marginalize them and take their individuality away. They think of these people more as a production line who is there to work and sacrifice their personal life. So we must all be wary about perks like that.

If you are someone looking for a job in any industry, maybe in tech or in sales, keep your head on a swivel and be observant. When you’re looking for a position, really poke in on the culture and see the things that are important to you. Are the people validated and supported? Poke in on their level of accountability as an organization.

Be involved and have a dialogue; you’re just not there to be grilled. Ask questions or talk to people who have worked there or who are working there. The manner in which your questions are received is a huge indicator of the validity of their response. Do these things before signing because you’ll never be able to do these dialogue and transparent conversations when you’ve signed the papers.

In the end, it’s important to respect people ultimately because that goes beyond being a good person and being a good human being. Respect, humility, and empathy go far in the workplace. It permeates innovation, office dynamics, and creativity. It permeates everything. The golden rule always applies – treat others the same way you want to be treated. This permeates so many things at the business level, the profitability level, and the quality of work level.

“Building a Culture of Empathy and Accountability” episode resources

Connect with Jason (@pseudoroom) by following him on Twitter, and his online portfolio at Pseudoroom.com. He also has a book entitled Cultivating a Creative Culture and a second edition that’s coming by next year.