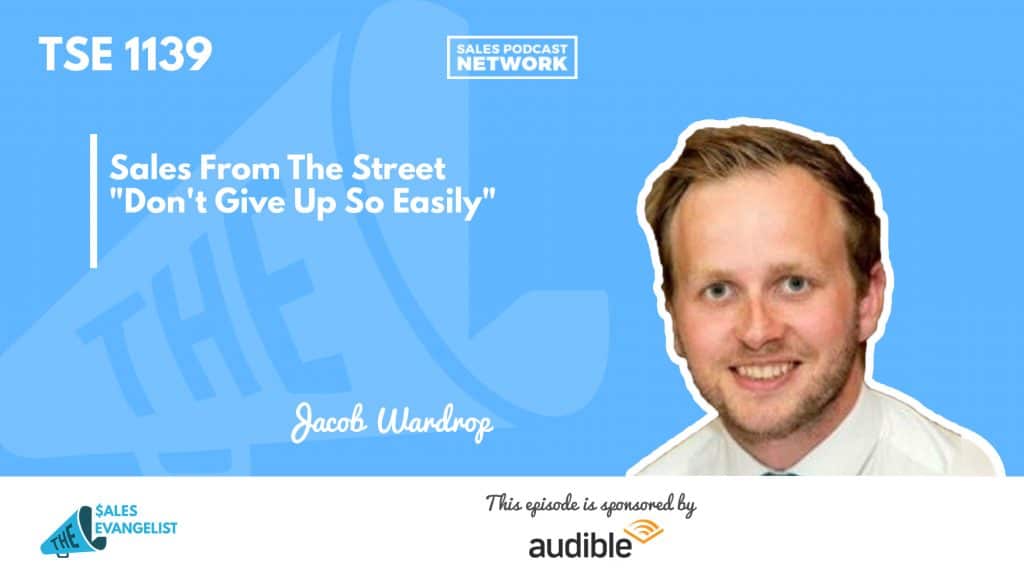 Some companies will be harder to connect with than others, but sellers who don’t give up so easily may find that an intentional approach can overcome those things that appear to be obstacles.

Jacob Wardrop is the sales director at an email management provider called 28Hands, which helps people who feel overwhelmed with the volume of email and need a more automated way of handling it.

Jacob once worked as a sales rep selling software to the construction industry, and he was assigned a geographical territory. The businesses ranged from 10 employees to about 400, and a couple had more than 500. One of those companies already worked with his competitor, and Jacob’s company had never been able to gain any traction with the other.

Despite making probably 200 calls, his company didn’t know what the prospect was currently using and the company wasn’t even sure if it was a good fit. They simply knew that the prospective company was massive and that there weren’t very many construction businesses of that size in the UK.

In short, the company wasn’t very open to the outside world. Employees weren’t able to use LinkedIn, there was a no-name policy from the reception, and nobody used their own email addresses. Each of the 19 offices had its own email address, and as emails came in, the receptionist would sift through them and hand them off.

Finding a way in

His background was predominantly outbound so he had what he calls a hunter mentality. He spent a lot of years doing small deals, kissing a lot of frogs and doing a lot of meetings without a lot of reward. Eventually, he started doing bigger deals, and because he had a taste of success, he saw a great opportunity with this new company.

He was reasonably sure he could get a meeting with them despite the fact that he couldn’t use LinkedIn or email, so the challenge was to get a foot in the door. Every seller before had failed to get beyond the receptionist, and Jacob got caught in that trap briefly, as well.

In the end, he counted 67 phone calls to the prospect, and he calls the experience a lesson in thinking about the best way in to an organization rather than just relying on a call list.

He started by scouring the website to see what information he could find. From there, because he worked in a geographical region, he trusted that he could find existing clients who worked in the same sector who would be willing to help out. He built a good relationship with some finance partners and other local companies. Over the course of three months, he felt comfortable asking for a favor.

He asked for information about who the problem solver was in the company. In other words, if you wanted to get something done there, who would you ask? His clients gave him the gentleman’s name, and also gave him permission to use their name in his email contact.

He sent a message requesting to speak to the managing director, and he got past the first stage where people tended to get stuck in this organization. The managing director agreed to a call and a meeting, largely out of curiosity. They had never worked with a company like ours, but many similar businesses were already working with us.

Getting the right person

The initial email kicked off an 18-month sales cycle.

The key to starting a conversation is getting in with the right person at the right time and generating curiosity about the products and services you offer. #SalesProcess

Sometimes sellers want to make things easy for ourselves so we end up sounding like everyone else. Many salespeople will be handed accounts that others have farmed for years, and they’ll be tempted to repeat the same cycles and call all the same people. Instead, consider taking a fresh look and seeking alternative people. Get creative in terms of how you’ll connect.

Give serious consideration to how you’ll be listened to.

The managing director passed him off to a management team to help with the initiative. The fact that he had a referral from someone at the top of the organization made a big difference. It means that Jacob could always call him and that he could update him on progress. That meant that the people he was meeting with were accountable for something.

This deal was worth about half a million, while the average deal previously had been about $100K. It was a record deal, and after a lot of meetings and site visits, his company landed it.

Many more traditional companies take a long time to make a decision, and there’s a lot of advice that says you shouldn’t keep pursuing opportunities which aren’t active. In this case, the fact that it took a long time was frustrating, but ultimately it was worthwhile.

By the end of the deal, Jacob was weary from the stress and sleepless nights, so on a Friday afternoon when he knew the deal was close, he drove there. He arrived at 2 and stayed until 9 waiting for the company to be in a position to sign the deal.

He persevered and stayed diligent and worked to separate himself from what everyone else was doing.

Eventually, he left a very comfortable position for one that didn’t have all the necessary components for success. He was frustrated and surrounded by negative energy.

He read a book called The Chimp Paradox by Steve Peters that addressed how to focus on the things that are within your control. Jacob wrote down all the key elements of a high-performing seller, from data profiling and gathering to business development and having a senior sales team.

The group had a product it could sell and a good message, but no intensity culture around it. He booked eight meetings in a day to see what he could learn off the back of that experience. He discovered that by simplifying and writing down a few key things and a simple goal helped him refine the message. It gave him some optimism because it generated some results.

It’s a much better approach than blaming other people for your problems or your challenges, which ultimately doesn’t help. It simply generates negative energy.

Once you take control of the situation and decide to control your own destiny, that’s when things can turn around.

Now, his team works to book 10 meetings before it spends a load of time or money on marketing content. It doesn’t matter whether they use email or LinkedIn. Simply that they book 10 meetings in a new sector because that element is within their control. You learn a lot when you’re in a room with 10 customers instead of being in an office.

Focus on the components that you don’t need other people for. Become a bit of a lone wolf and then build something.

Regardless of the outcome, whether it’s positive or negative, analyze what you did well. You can have a bad call that still ends well.

Many salespeople base all their self-esteem and confidence on outcomes from clients, which is a bit fickle since some of it results from luck. The danger is that they start to believe their own hype.

“Don’t Give Up So Easily” episode resources

You’ve heard us talk about the TSE Certified Sales Training Program, and we’re offering the first module free as a gift to you. Preview it. Check it out. If it makes sense for you to join, you can be part of our upcoming semester. You can take it on your own or as part of the semester group.

If you and your team are interested in learning more, we’d love to have you join us. Call (561) 578-1729 to speak directly to me or one of our team members about the program.

As a savvy seller, you’ll want to continue learning, and you can take advantage of a free 30-day trial, complete with a free audiobook, on Audible. They have thousands of books to choose from and you can begin your free trial today.

I hope you enjoyed the show today as much as I did. If so, please consider leaving us a rating on Apple Podcast, Google Podcast, Stitcher, or wherever you consume this content and share it with someone else who might benefit from our message. It helps others find our message and improves our visibility. When you share your experiences with the show, others will read the reviews and give us a listen.

I truly appreciate you and appreciate your reviews and your subscription, and your willingness to tell your friends and anyone you know that’s in sales about the podcast.