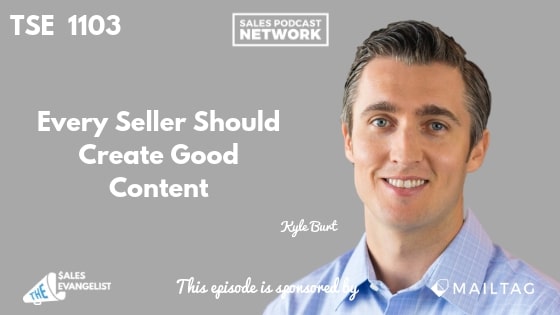 Every seller should create good content as a tool to gain leads, grow their business, and increase overall success.

Kyle quickly turned his video capability into massive success for himself. Before video, he was using cold calls, email, and “screaming from the tops of mountains,” knocking on every door and delivering cookies. When you’re starting out, you have to be willing to do whatever it takes.

He realized that video provided a good strategy to get leads. But he shifted his focus to making videos because he wanted to make videos. He realized he had a level of value and a perspective that wasn’t being shared.

Kyle recognized, too, that only the people in his bubble would understand the content he was posting because it was niche content.

He established a weekly schedule because he knew he had to post consistently, and he introduced Whiteboard Wednesdays. It was a chance to introduce different technologies.

Maybe 20 videos later, he was on vacation in Cancun in 2017 when he got a LinkedIn message from the VP of technology for Coca-Cola. He assumed someone was pranking him, but in fact, the gig turned into a consulting opportunity with the company.

When Kyle realized the VP had seen the very first video he ever posted, the most awkward of the bunch, he knew that he was on to something with video.

In the case of objections, sellers often face their own objections to appearing in or creating videos.

Fear of the comments

In my own case, I’ve been slow to take advantage of YouTube because I’m a little bit afraid of the comments I might get. People can be nasty sometimes.

The point is that there will always be the possibility of those comments. Someone once told Kyle he sounded like a little baby. He wasn’t even entirely sure what they meant by it, but he had to let it roll right off.

You have to be ready to take it on the chin when you put yourself out there. You’re going to get some good and some bad.

Internalize the fact that nobody has it all figured out, and then realize that people are genuinely good. Most people don’t want to tear you down, so don’t spend your time on the small number of people who have something negative to say.

It’s worth noting, too, that stories only survive for 24 hours, so they won’t live forever. If you create a bad one, it won’t be around for long. Even with LinkedIn, the feed algorithm means that it might technically always be there, but it will be harder to find.

We spent two years trying to get Kyle on the show but we couldn’t make it work out because of different schedules. Our recording day is Monday because it’s what works best for my team, and sometimes we have to bypass opportunities if they don’t fit with that schedule.

In Kyle’s case, he was persistent. He got early access to LinkedIn Live, which as of this writing is only available to a few people, and he invited me to connect with him. After 18 months of no real interaction, he reconnected with me and we made it work. He grabbed my attention and we ended up recording with him on a day outside of our normal schedule.

Disrupt the norm. Create good content that stands out.

My good friend Stephen A. Hart from the Trailblazers Podcast pointed out recently that there are 9 billion impressions on LinkedIn every week, which amounts to 468 billion impressions annually. Of those, only about 3 million users are creating content. That means there is a lot of space to create more free content.

You can’t find that kind of visibility on YouTube, Facebook, or any other platform. Basically, there are a small number of creators and a huge number of impressions, so it behooves you to grab a piece of the video market.

I happened to get into podcasting early when there were only a few sales podcasts. Now I’m a grandfather in the podcasting world.

Much innovation seems to happen with consumers first. The business world moves more slowly because there are more considerations to think about.

The marketplace dictates what it wants.

Kyle previously collaborated with another guy named Kyle to launch a video podcast called Coffee With Kyles. Now he’s working on a solo style show that will primarily involve live video. It will allow him to eliminate a lot of the editing and create more interactive experiences.

In the case of this podcast interview, our audience can’t interact with us right now as the interview is happening. When they are finally able to, it will change the game.

The goal is to get more people engaged and online. When you go live, you can’t stop the show because something goes wrong. Kyle said he has gone live five times and has broken the system five times.

Because of his persistence, he was one of the few to beta test LinkedIn Live, and it allowed him to connect with people and build relationships.

If you try to be known, you’ll miss the mark. If you create good content, you will be known. It’s all about who knows you.

If you aren’t creating some form of content or interacting with content on social media, you are irrelevant. Figure it out quick. If you’re a writer, write. If you can do video, do that. If you can do audio, do audio. Figure out your lane and experiment. Every seller should create good content.

You can connect with Kyle on LinkedIn or at his website, www.catchcloud.com.