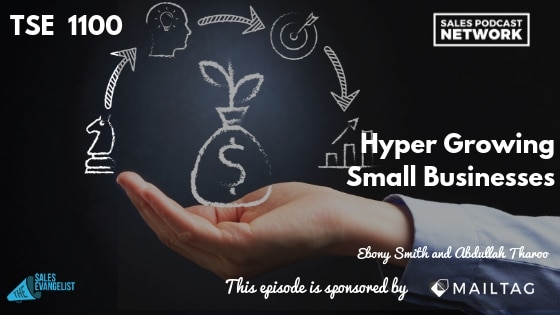 The Florida State Minority Supply Development Council connects us with successful entrepreneurs from a variety of industries, and many of them are using the council to grow their businesses. Every business, regardless of size, struggles with some kind of difficulty.

Today, we’ll hear from Ebony Smith and Abdullah Tharoo about how they’ve overcome the big challenges of entrepreneurship.

Ebony started her career in oil and gas until she found herself facing an ultimatum from her management team. She was being moved to an office that she didn’t want to occupy.

She took it as a sign to take time for herself. And because of a non-compete clause built into her contract, she took a year off from work and went to coaching school to improve herself and become a better leader.

She quickly realized that the idea of coaching had some legs when a friend of hers called her in need of a coach. Although she only had a weekend of training under her belt, the friend recognized that Ebony had more coaching experience than she did.

She helped her friend return to the workforce after maternity leave and then moved forward from there.

The transition was difficult but she made the decision to invest in herself. She had great savings and knew how to be frugal. She also sold her house in a hot market, which gave her a cushion and time to learn her new profession.

She found herself at a business development conference trying to figure out how to get to the next level. Ebony knew that she wouldn’t make the same money she had made in her trading career until she became a great coach.

She focused on becoming a good practitioner rather than scaling the business. She said she needed to know what she didn’t know.

She wanted to become the coach that she needed when she was in corporate America.

She and other women at the conference decided to create a mastermind, and through that relationship, she discovered the value of certifications for coaches. Ebony also discovered that there were corporations out there that wanted to spend more than a billion dollars annually with small business.

Since then, she acquired all the necessary certifications for coaching and she said that people recognize her at events now.

The key is to tell people what you do. And then tell them again and again. Eventually, they’ll hire you for a small contract and then they’ll get bigger.

Ebony points to her mastermind as one of the drivers of her growth and success. She also said that her four years with the NMSDC have helped her learn things she didn’t know she didn’t know.

Business owners are resourced beyond their imaginations, and it’s up to them to have a seat at the table with other people who want to share knowledge. #BuildCommunity

People often assume that companies like his gained their success overnight. He said he doesn’t have a scientific answer to explain his growth, but rather he keeps things simple.

About four years ago, he discovered a need to move into a different trade that would allow him to spend more time with his kids and his wife. He stepped back from the family business operating high-end jewelry stores.

He had previously thought that he wanted to really find a way to make a difference in people’s lives and save them money and help them grow. Abdullah recognized that technology was where everything was headed.

He knew he wanted to be involved in technology, so he did research and he engaged mentors. His family’s support played a huge role in his move forward, as did the mentors.

You need intelligent people outside your situation who can guide you to where you want to go.

He said that although he has been attending the NMSDC since he launched his business, there are some deals he hasn’t been able to close. Despite that, many of those companies have referred him to other people.

Your network decides your net worth. You must have a strong network because the people you walk with are the ones you’re going to become.

Abdullah said he continually returns to the NMSDC to do community service because he meets people there. He meets people who may not be able to directly give him business but who can guide him to the companies that need his service.

Warm introductions are so much better than cold calls. He said he doesn’t make cold calls anymore because he doesn’t have to.

He consciously makes the decision to give something back to the community that gives so much to him. He said people go out of their way to help each other.

A lot of people don’t want to join the NMSDC because they think they can’t reach these big corporations like Disney, NBA, NFL. But if you don’t aim high, you’ll never get where you’re trying to be. The NMSDC is the perfect instrument to get in front of these companies.

He invests most of his time building relationships. Every day, he sets out to meet 10 new people before he goes to bed. On days when he’s behind in his meetings, he’ll sit on the sidewalk and shake hands with people because he hasn’t yet met the 10.

Then, he decides who he wants to keep in touch with.

Make friends who can help you grow emotionally, spiritually, and financially.

You can connect with Ebony at her website, www.ebenumequationcoaching.com, or on LinkedIn @EbonySmithCoach.

You can connect with Abdullah at tharooa@paykoncept.com.

Connect with me at donald@donaldk4.sg-host.com.