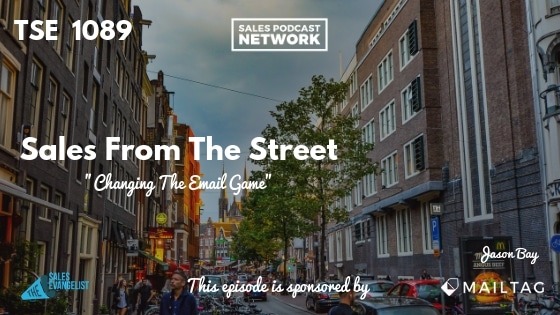 I get a lot of requests to appear on The Sales Evangelist, but Jason Bay set himself apart from the crowd by sending a video email and changing the email game.

Jason started his sales career while he was in college, and he and his wife now run a company called Blissful Prospecting, where they remove the stress of prospecting by doing it for their clients.

He quickly discovered that the smaller midsize business was overlooked in the existing offerings, and he wanted to provide a less robust service that still produced the same type of results.

Jason discovered there weren’t a whole lot of companies that were willing to work with smaller organizations. Those companies that don’t really have any SDRs and maybe they don’t even know the lingo.

Jason wanted to help those business owners who are already multitasking with some of their business development. They don’t have time to list build and personalize emails.

We’ve discovered the same dynamic at The Sales Evangelist. Many of the companies that need help are smaller companies whose sales reps have no training and no real process. The company expects the rep to thrive but they have no basis for it.

It becomes a vicious cycle of reps who wash out or leave to go to another company. The business hires another rep with no real training or process, and the cycle begins again.

Jason’s company prospects for itself, too, so the company does what it sells. Part of prospecting and selling is explaining to people what you do.

Video prospecting is similar to writing an email. It’s common knowledge now that your emails must be personalized beyond a first name. You must actually include something in the email that’s personal to the reader.

Many people take this approach:

I listened to one of your recent podcasts about this topic and I discovered… (fill in the blank.)

While it’s personalized, it’s a little redundant. We have to work to empathize with the prospect, and they may prove to be a little more difficult for men.

Video allows you to put a face to an email. It allows the recipient to see a human being instead of reading an email, so you’re changing the email game. You can still send an email or a LinkedIn message.

You can’t fake video. Everything in prospecting demands that you do it the right way if you want to succeed. Think about the type and quality of clients you want to attract.

If you’re engaging in the “murder by numbers approach” of sending 1,000 emails in order to land 5 appointments, think about the quality of customer you’re attracting. It won’t be really good.

If you want to work with a specific group of customers, you must show them that you’re their peer. You aren’t a guy sending tons of spam and praying that it succeeds.

Video takes a little more work, but if it produces more responses, it’s worth the investment of time. I’d rather my sales team spend a few minutes researching and sending out 10 to 15 videos if I’ll get responses from eight of them. They’ll be much richer opportunities.

Your numbers may not be as high with video, but the return will be better. It’s the account-based approach. Instead of getting a big list of people, do research to come up with a list of companies that will be a good fit.

Think of it as going to the gym. If you go to the gym with a plan for the session, you’ll be much more efficient than if you go in and just wing it. Without a plan, you’ll take twice as long and be half as effective.

Do all the prospecting preparation on the front end so that you aren’t spending your time with prospects who aren’t a good fit. Focus your prospecting attention on companies you can actually help and serve.

Many people avoid video because they worry about how they’ll appear. You must work around that fear because there isn’t a single scenario where video isn’t a good option.

Your pitch shouldn’t be more than 1-2 sentences.

Video is easier to consume and it stands out in a crowded email inbox.

Don’t prospect to make a sale. Prospect to start a conversation. #Prospecting

You’re not going to sell a prospect over the phone or through email or LinkedIn. Your job is to simply sell them on the appointment.

Your call to action isn’t, “We can help you.” It’s “We help businesses like yours and if you’re having a specific challenge, we might be able to help you too.”

Don’t pretend like you know more than you actually do. And don’t leave your prospect feeling like he has been insulted.

So many platforms have launched their own video capabilities that it’s difficult to choose one over another. Be conscious of a couple of things, though.

Jason likes Loom and Soapbox right now. Loom is a Google Chrome extension that’s a little clunky but effective. Soapbox has a free version that is very capable and good quality, and its pro version has useful features as well.

AB test everything. Test your specific situation. Before you invest time and energy into video, try sending videos. Measure to see what happens.

Test different areas of the email sequence. Try it at the beginning of the message or maybe at the end to see what works best in terms of changing the email game.

Prioritize your prospecting based on who is the most engaged with the actual outreach. Use the software that shows you who is actually opening your messages and invest your extra effort into those people.

You can connect with Jason at blissfulprospecting.com/Donald where he has put together some basic tools to help you get started in video prospecting. You’ll find a PDF, a script, and the flow for recording that will move you toward changing the email game.

You’ll find lots of good resources on the website as well.

Check out Loom, Soapbox, BombBomb, or Hubspot for video capability that meshes with your existing workflow.